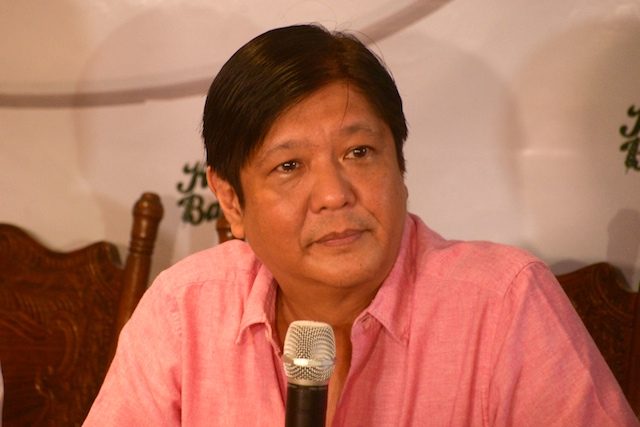 Marcos said talks with Binay failed because of a “political divide” between their two camps.

The opposition standard-bearer, Binay was a human rights lawyer who fought the dictatorship of the senator’s father, the late president Ferdinand Marcos. The Vice President was also a staunch ally of the later strongman’s rival, Corazon Aquino.

“When you talk about this kind of arrangement, you don’t talk about yourself as an individual but your camp, your group, and supporters. It’s simple. The political divide was a little too wide for us to breach at every level,” Marcos said in a press briefing on Wednesday, October 7.

Binay has been trying to convince Marcos to be his vice presidential bet for two months. Yet as Rappler reported, the Marcos family, particularly former First Lady Imelda Marcos, was against the tandem. (READ: Why the Binay-Marcos tandem fell through)

A possible partnership would have been wrought with political baggage because of the history separating the two camps.

Binay is also dealing with 5 plunder complaints over corruption allegations, and even warned of a possible arrest. Once the front runner in the presidential race, Binay saw a plunge in his popularity due to the controversy, and he has placed second or third in recent surveys.

Marcos said there were private discussions with Binay’s team but these did not progress.

Marcos’ decision over the weekend prompted the Binay camp to move on to its next option, Senator Gregorio Honasan II.

The vice president of Binay’s United Nationalist Alliance (UNA) party, Honasan is now deciding on the offer. (READ: Honasan as Binay’s VP: ‘I have always been a good soldier’)

Marcos announced on Monday that he is running as an independent vice presidential bet. He is one of 5 politicians so far to contest the post.

He is set to formally launch his campaign on Saturday, October 10, in Intramuros, Manila.

“We have been friends for a long time,” Marcos said. “I talk to him fairly regularly. When we talk, he tells me is not running. So I have to believe what he says. He may change his mind. That’s a distinct possibility. We keep hearing all speculation that he will run. We are in the heat of filing so we take it at that.”

For now, Marcos said he operates on the belief that Duterte is not running but he is open to running with the mayor if Duterte vies for the presidency.

“Let’s cross the bridge when we get there,” he said.

“I’m flexible as to what are the opportunities, alliances that will become available. If Mayor Duterte decides to run, that will change the political scene. You take that all into account. You must be able to adjust to any new development,” Marcos said.

‘A vice president can do much’

Presidents and vice presidents are elected separately in the Philippines. In the current administration, Binay leads the opposition while President Benigno Aquino III is the chairman of the ruling Liberal Party (LP), which is fielding former interior secretary Manuel “Mar” Roxas II for president.

Binay resigned from the Cabinet to formally launch his presidential bid. He has drawn flak for saying that under the Constitution, the vice president has no functions.

Marcos said he believes the vice president can be effective in government.

“Ever since they separated the president and the vice president [in voting], you have to find a way to work together. I believe that’s something you have to work out between you and your president. There’s much you can do as a member of the Cabinet and the executive,” he said.

Marcos said he does not consider the post a “spare tire.”

“It’s really up to the person. The traditional portfolio given to the vice president is housing, but speaking out on issues and having advocacies are a big thing. You can effect change from within. Now, it’s a much more important role. I will seek to play a bigger role as possible,” he said.

The senator was undecided on his political plans until this week. He could have run for president or the safer option of re-election but he opted to seek the vice presidency instead.

Marcos explained that the changing political alignments made it difficult to finalize his plans. A politician of 26 years, Marcos was representative, governor, and vice governor of Ilocos Norte.

“This is the strangest and most complicated election I have ever come across in my long time in politics. As a child watching politics, usually one year before the elections you know who is running for president and vice president. This time, you don’t.” – Rappler.com