Who are LP Senate bets Cresente Paez and Nariman Ambolodto? 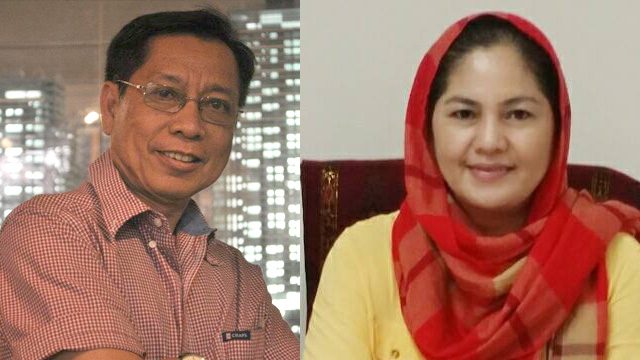 Facebook Twitter Copy URL
Copied
Both hail from Mindanao and are currently government officials – one elected, another appointed

MANILA, Philippines – While most of the ruling Liberal Party (LP)’s Senate slate is made up of familiar names with almost-instant recall, there are two Senate bets who may come as a surprise: Cresente Paez and Nariman Ambolodto.

The two, both government officials, were late additions to a list that was only finalized the morning of Sunday, October 11, or a day before the party is scheduled to formally announce its 12-man Senate slate.

It was a slate that took a while for the ruling party to finish, after two of its previously “sure” candidates backed out of consideration or from the race completely.

The week the LP was set to announce its slate, Metropolitan Manila Development Chairman Francis Tolentino got flak for supposedly hiring an all-girls group to perform at a birthday party of an LP member in Laguna. He eventually bowed out of consideration from the slate.

The same week, another LP official assured of a slot in the slate, Quezon City Mayor Herbert Bautista, suddenly had doubts over a Senate run.

After being rescheduled thrice, the LP will finally be announcing its Senate slate on Monday, October 12 at its headquarters in Cubao, Quezon City.

A Zamboanga native, Paez has been COOP NATCCO Party List representative for 3 terms now. He is barred from seeking a seat in the House of Representatives in the next elections.

In a statement released Saturday, October 10, a coalition of cooperatives in the Philippines endorsed Paez’ planned Senate run, according to a story on Interaksyon. The same coalition endorsed the Senate bids of PhilHealth director and former Akbayan Representative Risa Hontiveros, who is also part of the LP slate.

“Paez will be banking on the 13-million vote potential of the cooperative-based groups,” said Interaksyon in its report.

Paez, sources privy to the ruling LP’s discussions, was already in talks to join Senator Grace Poe’s senatorial slate. Despite his being a relative unknown, Paez is banking on the votes cast for cooperative-based groups during the 2013 elections.

Over 14.5 million people cast a vote for the different groups in 2013, cooperatives coalition secretary general Jose Romeo Ebron was quoted by Interaksyon as saying.

Ambolodto, meanwhile, is currently Assistant Secretary for Muslim Affairs and Special Concerns in the Department of the Interior and Local Government (DILG), which Roxas used to head. Prior to being appointed in the department, Ambolodto was officer-in-charge of the province of Maguindanao after its governor, Andal Ampatuan was suspended over his alleged involvement in the grisly Maguindanao massacre of 2009.

At the time she took over Maguindanao, Ambolodto was part of the provincial council and a teacher at the Notre Dame University in Cotabato City. A 2010 report from the Asia Foundation noted that Ambolodto was “neutral” when it came to the feuding political families in the province: the Ampatuans and Mangudadatus.

“In keeping with her background as an academic and NGO worker, Ms. Ambolodto ran the meetings in a participatory fashion, allowing personnel to interact directly with her and asking for their opinions. This was a welcome opportunity for the employees to once again exercise their technical skills,” the Asia Foundation report noted.

The two are not listed in any of the publicly-released survey conducted by polling groups and ahead of the filing of candidates. – Rappler.com