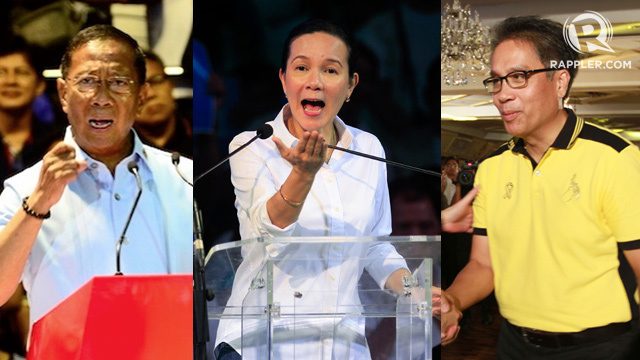 Facebook Twitter Copy URL
Copied
Conducted before Duterte announced on October 12 that he is not running for president, the poll shows 47% of voters will choose Poe as their preferred presidential candidate

MANILA, Philippines – In a 3-way presidential race, without Davao City Mayor Rodrigo Duterte, Senator Grace Poe will be the preferred choice of voters.

In that scenario, nationwide, 47% said they would vote for her, while Vice President Jejomar Binay and Liberal Party standard-bearer Manuel “Mar” Roxas II would each get 26% of the voters.

The survey was done before Duterte announced yet again on Monday, October 12, that he was not running.

Overall, however, in a race with 8 possible candidates, Poe emerged Number 1 in the latest Standard Poll, obtaining a plurality of 32%.

The other candidates listed were Manila Mayor Joseph Estrada, Senators Ferdinand “Bongbong” Marcos Jr and Miriam Defensor-Santiago, and former senator Richard Gordon. Survey respondents were asked to choose from among the 8 candidates.

In the event that their first choice for president backs out, respondents were asked who they would vote for. Most of those who did not choose Poe initially, said they would prefer her (47%). 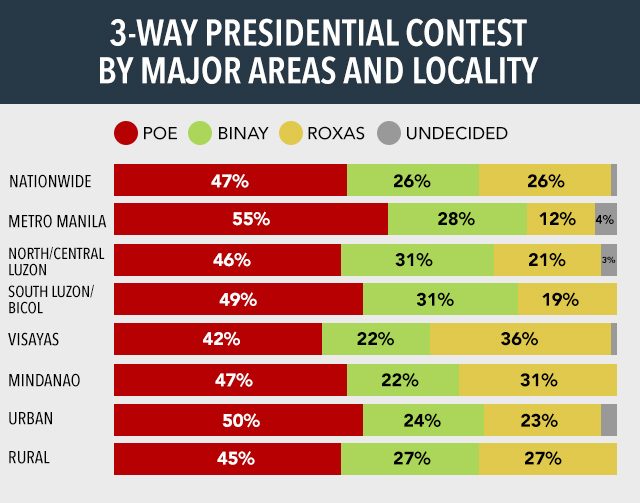 In a 3-way race with Poe, Binay and Roxas, Poe was strongest in the urban areas compared to the rural areas, particularly in Metro Manila where 55% of respondents said they would choose her.

Binay is the preferred candidate of respondents in Northern and Central Luzon, as well as Southern Luzon and Bicol at 31% each. Roxas’ bailiwick remains to be the Visayas where he got a rating of 36%.

In both the urban and rural areas, Binay and Roxas were evenly split, excluding those who said Poe was their preferred candidate.

These were among the findings of a survey conducted by Laylo Research Strategies of pollster Pedro “Junie” Laylo Jr from September 21 to October 1, 2015. Results were published as part of the poll which had 1,500 respondents from 76 provinces and 17 cities in the National Capital Region. It had an error margin of ±2.6% for the national and ±6% for the regions.

At the time of the survey period, Poe had already declared her candidacy, followed by her running mate Senator Francis “Chiz” Escudero. At around this time, too, Duterte said he was still in a quandary about running for president.

In a 4-way race, however, which still includes Duterte, Poe would benefit even more, obtaining a rating of 41%. Binay and Roxas emerged very close to each other, with Binay obtaining 23% compared to Roxas’ 22%. Duterte got 13%. 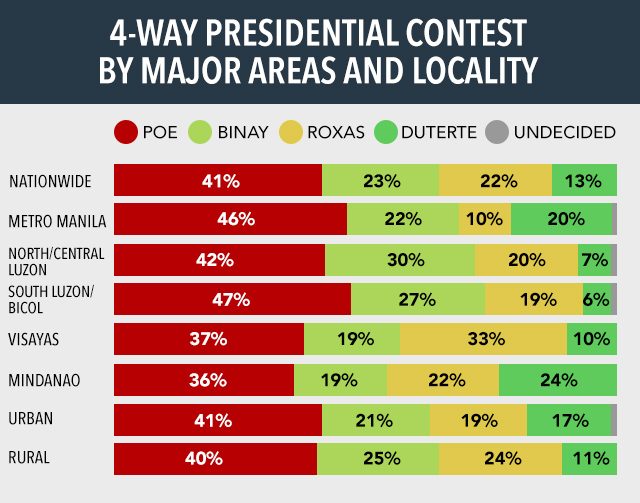 In this scenario, Poe dominates all geographical regions, with Roxas eating up a substantial share of 33% in the Visayas compared to Poe’s 37%.

After Poe, Binay was strongest in Northern and Central Luzon with his 30% compared to her 42%.

In the previous Standard Poll of May 8-18, Binay registered a national preference rating of 28% compared to Poe’s 24%. Duterte and Estrada each got 10%, while Roxas got 8%.