Facebook Twitter Copy URL
Copied
As of Thursday, the running tally is at 76 aspirants for president, 15 for vice president, and 83 for senator

MANILA, Philippines – Two other political tandems have filed their certificates of candidacy (COC) on Thursday, October 15, making official their bid for the top elective posts in the 2016 elections.

The two arrived with their families past 9 am. They were also joined by President Benigno Aquino III and key party leaders and supporters. 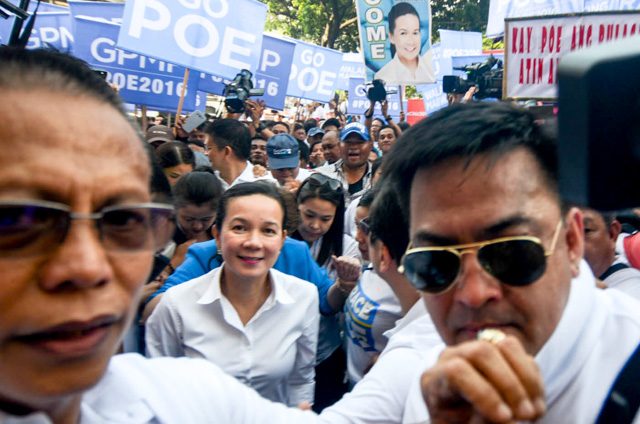 (Leni and I are all in, in filing our COCs. We will give our all to this fight. This is a fight that has to be fought – a fight for our people, for every Filipino and the prosperity everyone dreams of.)

From the sea of yellow in the morning, the streets outside Comelec turned into red, blue, and white as the other tandem, independent candidates Grace Poe and Francis Escudero, arrived past 3 pm to file their COCs.

“We know that we have enormous work ahead of us so we can’t be distracted by petty politics or the dirty tactics that others use against us,” Poe said in a statement.

There are now 83 who have filed for senator – 30 of them filed on Thursday alone. Four are candidates from the LP’s “Daang Matuwid” coalition:

One of De Lima’s critics, jueteng whistle-blower Sandra Cam, will also be running as senator under the Pwersa ng Masang Pilipino party. In 2014, Cam criticized the justice secretary over the conduct of the investigation into the pork barrel scam.

Speaking of the pork barrel scam, lawyer Lorna Kapunan, whose most controversial client was pork barrel queen Janet Lim-Napoles, is also vying to be a senator in 2016. She said her party, Aksyon Demokratiko, will align with the Poe-Escudero tandem. Losing 2013 senatorial candidate Teddy Casiño wants to return to Congress. He is a  party-list nominee of Bayan Muna, which he represented from 2004 to 2013. Among the other groups that want to join the party list are:

A total of 62 party-list groups have filed certificates of nomination and acceptance for their nominees on Thursday. This brings to 127 the total number of groups seeking to join the party-list elections in 2016. – Rappler.com