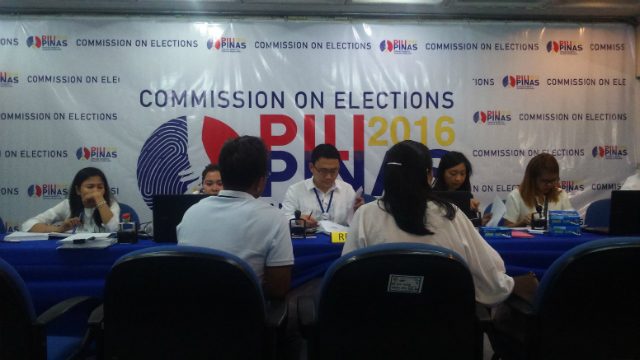 MANILA, Philippines – The Commission on Elections (Comelec) said it is prepared for an expected surge of party-list groups filing their nomination and acceptance certificates on Friday, October 16, which is the government-set deadline.

Comelec Spokesperson James Jimenez said there are a total of 244 expected groups that will file their certificates of nomination and acceptance for the party-list system, with Comelec data showing only 127 have done so as of Thursday, October 15.

There are 117 groups remaining whose representatives are expected to appear before the election commission on Friday – all to be entertained within a 9-hour window from 8 am to 5 pm.

This means each group must ideally be able to complete in under 5 minutes each of the steps required for filing their requirements.

Jimenez said groups will still be allowed to file their nomination and acceptance certificates as long as they had already entered the premises before 5 pm.

This week marks the filing of certificates of nominations and acceptance for party-list groups vying for congressional seats in the 2016 polls.

The groups allowed to file such requirements from October 12 to October 16 are already accredited by the Comelec as party lists in past elections or have pending accreditation petitions filed this 2015 before the Comelec en banc.

On Thursday, 62 groups were able to file their respective certificates of nominations and acceptance.

Certificates of nominations and acceptance are two of the 4 requirements for groups vying for congressional seats through the party-list system. The first two earlier requirements include the petition for accreditation and the manifestation of intent to participate, which is the equivalent of an individual’s certificate of candidacy.

All the groups filing their respective nomination and acceptance certificates this week must have already submitted the first two requirements.

The party list is a system of proportional representation meant to better represent marginalized sectors as well as groups lacking “well-defined constituencies.”

Republic Act 7941 or the Party-List System Act allocates 20% of the total seats in the House of Representatives to party-list representatives.

There are currently 56 party-list representatives from 41 party-list groups in the 16th Congress.

A 2013 Supreme Court decision reversed a decade-old rule in party-list accreditation, and allowed groups that don’t represent marginalized sectors but those that lack “well-defined constituencies” to join the system.

Nominees of party-list groups do not necessarily have to be from the sector they represent. They however need a “track record of advocacy for their respective sectors,” opening the door to more traditional representatives or even politicians who claim to possess this track record to obtain a seat in Congress through the system. – Rappler.com