Miriam: Fighting corruption made me run despite health 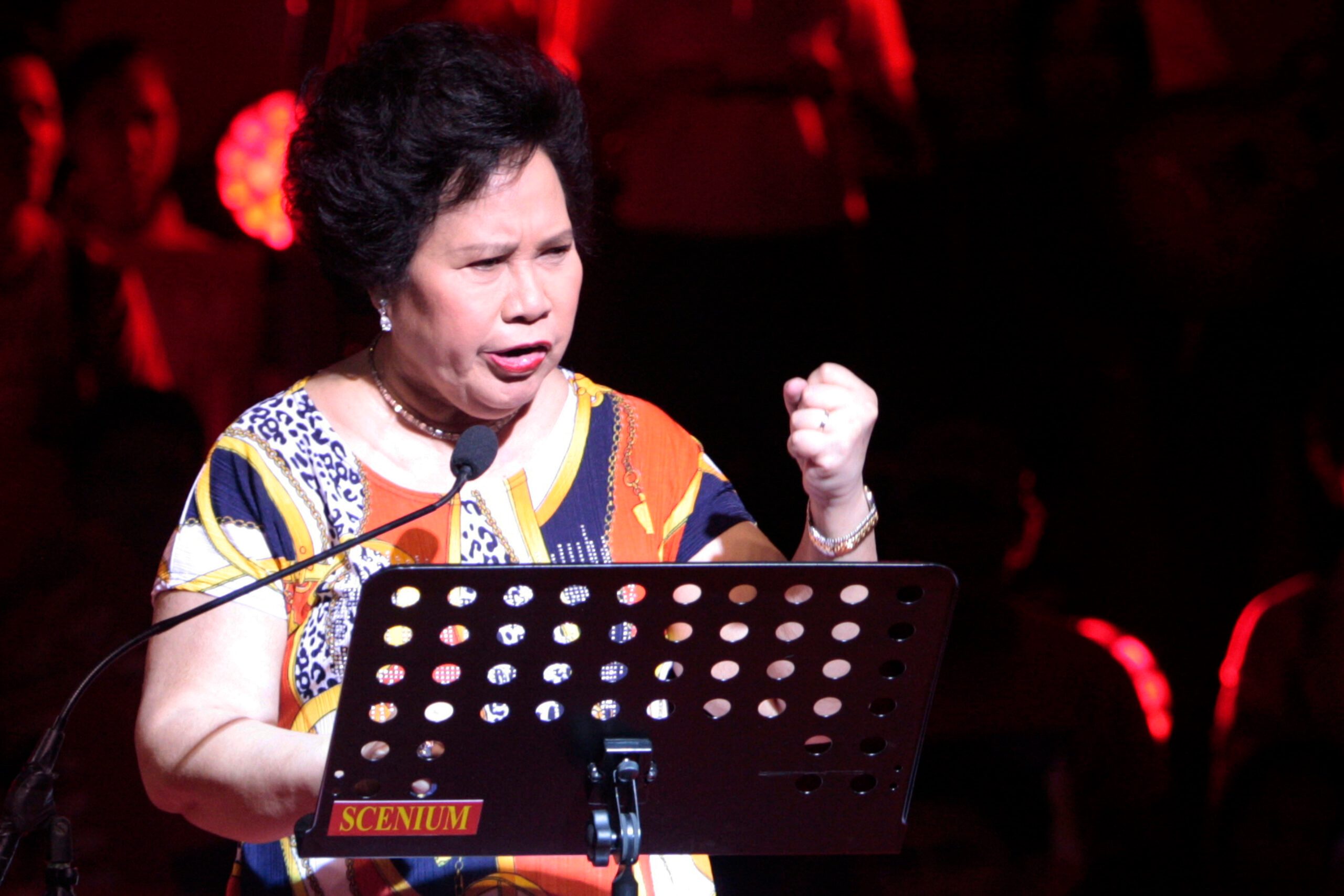 Facebook Twitter Copy URL
Copied
Senator Miriam Defensor Santiago, whose Senate speeches are usually fiery and lengthy, speaks for only about 5 minutes, and has difficulty walking and standing

MANILA, Philippines – Senator Miriam Defensor Santiago said she decided to run for president despite having stage 4 lung cancer to stop corruption in government.

In a concert-like event, Santiago was feted like a rock star in a “meet and greet” with supporters at the University of the Philippines (UP) Bahay ng Alumni. She admitted that her doctors left it up to her to decide on her candidacy. (READ: #AnimatED: Public interest trumps privacy)

“I have passed through the hardest of physical trepidations and hardships known to man. Cancer is not an easy disease to have. I decided upon consultation with my doctors at Saint Luke’s [Medical Center] that it should be up to me to run for president,” she said on Monday, October 26.

“My answer is: do you want a clean, courageous government? A government of, by, and for academic excellence? If that is the case, do you want me?”

A crowd of students, party mates, and multi-sectoral groups answered with a resounding yes, and chanted, “Miriam! Miriam! Miriam!”

Santiago, 70, spoke for only about 5 minutes, far from the fiery, kilometric speeches she is known for at the Philippine Senate. The reading of Santiago’s curriculum vitae was even longer than her address.

The senator also had difficulty walking and standing, and immediately sat after her speech for photo ops on stage.

Yet the legal expert continued to dismiss concerns about her health, and even took a swipe at Doctor Sylvia Claudio, who called on her to release her medical records.

“At least one person on the Internet voiced her urgent wish that I should die in the next 6 years. It is up to you to accommodate that macabre wish,” Santiago said.

In a Thought Leaders piece for Rappler, Claudio urged Santiago to be transparent about her health so the public will know if she can muster a campaign, and the 6-year presidency.

“There is no clear demarcation when the public’s need to know exceeds your right to confidentiality. But as a physician and as a concerned citizen, I believe you tipped the balance when you filed your certificate of candidacy,” Claudio said.

Santiago though has rejected the call, and even criticized Claudio for supposedly being out to ruin her campaign.

She was elected judge of The Hague-based International Criminal Court in 2011 but had to forego the post due to her health. She has been on medical leave from the Senate due to cancer and chronic fatigue syndrome. In her speech, Santiago explained why corruption prompted her to gun for the presidency for the 3rd time.

She first ran for president in 1992 but lost to Fidel Ramos in an election she claims was rigged. She also vied for the presidency in 1998 but finished 7th in the race that Joseph Estrada won.

(I noticed that in the Senate it is easy to steal government money. The problem is those who love talking are the ones stealing. They talk against graft and corruption, but their English is wrong! They are stealing public funds. This must stop! So I will attempt to do all I can even if I am old.)

Santiago did not explain how her anti-corruption stance fit with her choice of a running mate, Senator Ferdinand “Bongbong” Marcos Jr, the son and namesake of the late dictator Ferdinand Marcos.

Senator Marcos was absent in the “meet and greet” but his supporters were there.

Santiago previously said that the Marcos family does not owe the Filipino people an apology for widespread corruption and human rights abuses during martial law.

“I think what should happen is there should be a forthright disclosure of all documents and written remembrances of those times so we can agree at least on what the facts were,” she said when she filed her candidacy on October 16. The UP gathering was lively, far from typical political rallies. Catering to Santiago’s millenial support base, the “meet and greet” featured songs from American singer Ariana Grande and the ’90s band Eraserheads, and Rivermaya.

At one point in Santiago’s speech, a supporter cried out: “Miriam, kasama mo ako!” (Miriam, I am with you!)

Laughing, the senator responded: “Kasama mo ako? ‘Di mo alam ang ugali ko!” (You are with me? You don’t know my attitude!)

Turning serious, Santiago said she wanted Filipinos to take pride in their country.

(I studied in America, in England. I won’t allow our country to be beaten. We are great. Philippines, we are great.)

She ended her speech by quoting her favorite line from William Ernest Henley, who wrote the poem Invictus: “It matters not how strait the gate. I am the master of my fate, the captain of my ship.”

Then she added: “Thank you for becoming the captain of your soul.” Among Santiago’s guests were Ceciilia Ongpauco, mother of actress Heart Evangelista who is married to Senator Francis Escudero. Ongpauco told reporters she was supporting Santiago because the senator is the most competent presidential bet.

Yet Ongpauco refused to talk about other candidates. Escudero is the running mate of independent Senator Grace Poe.

Senatorial bet Susan “Toots” Ople was also present, and was repeatedly endorsed during the event. Ople is a member of the Nacionalista Party (NP) and a guest candidate of the opposition United Nationalist Alliance. Another senatorial candidate, retired general Ramon Montaño, also supported Santiago at the event.

Santiago’s party mates from the People’s Reform Party graced the gathering, along with her relatives.

Yet the bulk of those who attended were students, with some coming all the way from Nueva Ecija. They carried Philippine flags, and banners with the words “Miriam Fight!” and “Miriam 2016.”

Fifty to 60 young volunteers were at the event, including University of the Philippines student Don Christian Fernandez.

A Santiago fan since childhood, the 20-year-old Fernandez told Rappler that Santiago is the kind of candidate the youth is rooting for.

“Among all of the most viable presidential candidates, she’s the most qualified. That is one thing that gives her the edge among other candidates. She’s feisty. She doesn’t sugarcoat. She says it as it is and we need that kind of leader,” he said.

Fernandez said he supports the senator despite concerns about her health.

“The youth are so tired of corruption. We saw the state of our country before, under corrupt leaders. Probably this is why there’s a resounding call from the youth for change that will come from the leadership of Senator Miriam. If she says she can make it, we know she will. We are here. She is not alone in this fight.” – Rappler.com