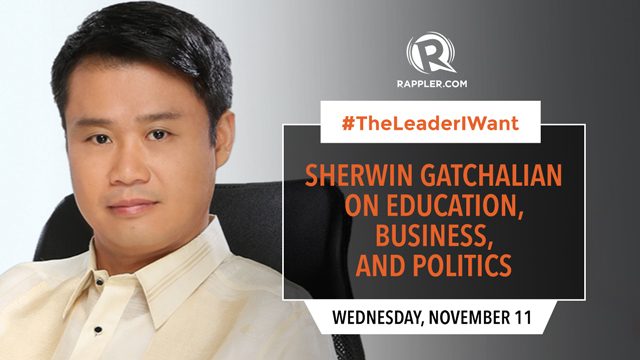 MANILA, Philippines – In October, Valenzuela Representative Sherwin Gatchalian filed his certificate of candidacy (COC) for senator. Gatchalian, once an ally of Vice President Jejomar Binay, is now part of the senatorial slate of presidential candidate Grace Poe and her running mate, Francis Escudero.

Gatchalian is a member of the 2nd biggest political party, the Nationalist People’s Coalition. He is running on a platform of quality education and inclusive growth.

The businessman and son of tycoon William T. Gatchalian says his 15 years of experience as city mayor and congressman would help him push for supposed true reforms on education, governance, and the economy.

Watch the interview with Gatchalian. – Rappler.com