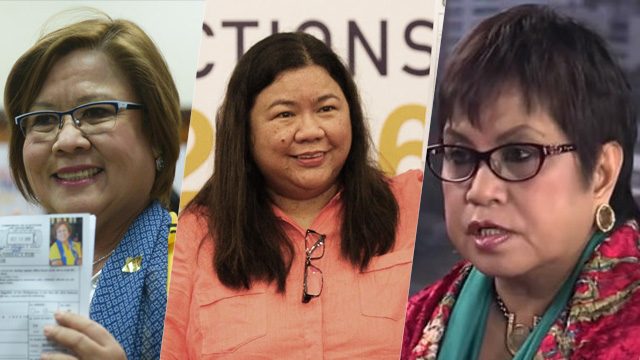 MANILA, Philippines – Recognizing that jobs and livelihood opportunities are top-of-mind concerns for Filipinas, 3 women candidates for the 2016 polls vowed to push for reforms in the workplace and labor landscape if elected to the Senate.

Labor and employment issues are among the key priorities highlighted by the candidates, two of whom – Kapunan and Ople – are running as guest senatorial candidates of independent presidential bet Senator Grace Poe. De Lima is running under the ruling Liberal Party, with administration standard-bearer Manuel Roxas II.

Kapunan, a human rights lawyer who has represented high-profile clients, said millions of Filipinos remain unemployed, and those who do have jobs struggle to make ends meet because of their low salaries.

“Many employees ask for help, because they don’t get living wages. They get libing (burial) wages,” she said.

She also hit the industry practice of contractualization, wherein employees’ contracts are terminated after 6 months to avoid being taken in as a regular employee and afforded full benefits under the law.

Kapunan wants to push for legislation that will support basic industries in the Philippines and guarantee work to millions of Filipinos – a solution, she said, that would also address the problem of poverty.

She added that having decent employment opportunities in the country would help stop the exodus of thousands seeking their fortunes as overseas Filipino workers (OFWs).

For OFW advocate Ople, the government should also set the example by being firm in securing the tenure of government employees, and ending the practice of hiring job-order personnel.

“How can the government claim moral ascendancy if within public offices there are also job-order employees and contractual workers? Security of tenure is very important,” she said.

Ople added, “How can you plan for your family if in 6 months, you’re not sure if you still have a job?”

The former labor undersecretary and daughter of late senator and labor minister Blas Ople also said she would push for a law that would prohibit age discrimination in the workplace.

“It is ability that employers should look at, not age. Now, unless government intervenes by imposing a law, applicants that don’t fit the 18 to 25 age range will always be on the second tier of job applicants,” she said.

As a longtime OFW advocate, Ople also vowed to strengthen the fight against human trafficking. She cited the incidents of abuse suffered by many Filipino women abroad, who fail to get help and justice from their own government.

“Many of our women coming from abroad bear invisible scars. What I’d like to see are specific, well-defined programs. Victims approach one government office to get all the services they need, from recovery to immigration concerns,” Ople said.

Meanwhile, addressing gaps in the legal processes are among the priority concerns of De Lima, a former justice secretary and former chair of the Commission on Human Rights.

In a Rappler Talk interview, De Lima cited her experience both as an outsider to the executive department and later as a member of it, which allowed her to spot the “gaps and deficiencies” in the justice system.

With her background as a lawyer, De Lima’s platform centers on human rights, rule of law, and an anti-corruption campaign.

“Forget about attaining justice if you don’t respect human rights,” she added.

De Lima said she wants to address “obsolete provisions” in the Revised Penal Code which should be updated to address new issues in human trafficking, drug trafficking, and cybercrime.

She also plans to push for the simplification of the criminal investigation process, so that the guilty will be punished and the innocent, freed faster. – Rappler.com