All in the family: ARMM political clans seek posts in 2016 MANILA, Philippines – November 2015 marks the 26th anniversary of the creation of the Autonomous Region in Muslim Mindanao (ARMM). As it faces another critical year, a new set of leaders will hopefully strive to bring about long lasting peace and development in the region.

Based on data from the Commission on Elections, 253 filed their certificates of candidacy (COC) for provincial and congressional positions in ARMM – or 64 government positions.

All too familiar names, however, are again vying for posts in the 2016 ARMM polls.

Out of the total number of filers, families known for their strong hold in Mindanao provinces are well represented, with more than two members running at both levels. (READ: How much of our country will we lose to political dynasties in 2016?)

Hover and click on the dots to see the rest of the data per province. 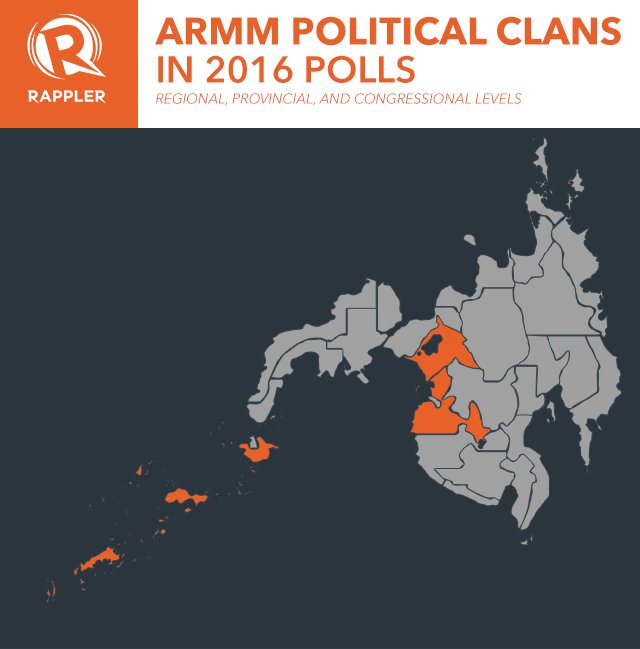 Rappler lists the trends observed in the list of COC filers for ARMM positions:

1. All in the (nuclear) family

The branches of political clans often stretch as far as 3rd degree relationships. In some instances, however, multiple members in government positions are not necessary to see a family’s political grasp – it can be as simple as a parent and a child or even just siblings.

Mother and son tandems from the clans of Alonto-Adiong of Lanao del Sur and Tans of Sulu are seeking the two highest provincial positions in their respective provinces.

In Maguindanao, father and son Esmael and Khing Jhazzer Mangudadatu aim for provincial positions as governor and provincial board member, respectively.

In May, the elder Mangudadatu was the subject of a report which showed him and his family with helicopters – an alleged slap to the face of the poor province. He denied the allegations but admits to owning a Hummer.

When a politician’s allowable term ends, there are usually two options for him on the table: return to private life or run for another position.

However, there have been cases where a family member – usually the wife or child – takes over until said politician is eligible to run again. This keeps the power that comes with the position within the family.

Among the ARMM COC filers, this kind of scenario is evident in Sulu.

From 2001 to 2010, Munir Arbison served as 2nd district representative in Sulu. In 2010, he ran for provincial governor but lost. In 2013, his wife Maryam Arbison ran for the position he vacated and won.

Munir Arbison hopes to return to the seat he held for 10 years in 2016.

But the involvement of at least 15 Ampatuans in the country’s worst case of election violence does not hinder political dreams, as at least 4 individuals in the list of COC filers bear the controversial surname.

Even one of the co-accused, Sajid Islam Uy Ampatuan, is running for mayor of known bailiwick Shariff Aguak. He posted bail early this year. (READ: Grand welcome for Ampatuan son out on bail)

When clan patriarch, Andal Ampatuan Sr, died in July, the youngest Ampatuan son said it is not the end of his family’s rule in the province.

In 2013, 73 members of the Ampatuan clan ran for various positions in ARMM.

The political clans in ARMM are well-represented in several levels of government, according to the official list of COC filers.

This is very evident in Maguindanao as members of the Sinsuat and Mangudadatu clans are aiming for various positions at the regional, provincial, and congressional levels.

The Sinsuats have two members running for provincial board while one aims to join the regional government as 1st district assembly man. Another Sinsuat is seeking reelection as provincial governor.

The Mangudadatus, on the other hand, have 3 in regional, two in provincial, and one at the congressional level.

Members of ARMM clans who are running in 2016 may not necessarily belong to the same political party.

However, 8 parties that stood out based on the gathered data include:

No law but effects

There is no existing law barring members of the same family from various government positions in the same election. Likewise, no law hinders a relative from taking over another relative’s position, given that it goes through an electoral process.

The provinces, on the other hand, belong to the poorest in the Philippines. The latest estimated provincial poverty incidence are all higher than the national average of 19.7.

An increase can also be seen in the poverty incidence in all 4 provinces except Tawi-Tawi.

In an opinion piece published on Rappler, University of the Philippines Professor Clarissa David said that poor communities – especially in rural areas – are often trapped in a political system which leaves them no choice but to go into “patronage-based relationships.” (READ: Limiting dynasties will help the poor)

She added that the best way to end this is to “implement a constitutional prohibition.”

However, the anti-dynasty bill just reached the plenary in 2014 after 27 years at the committee level. In his last State of the Nation Address, President Benigno Aquino III made an appeal to lawmakers to finally pass the controversial bill. – Rappler.com