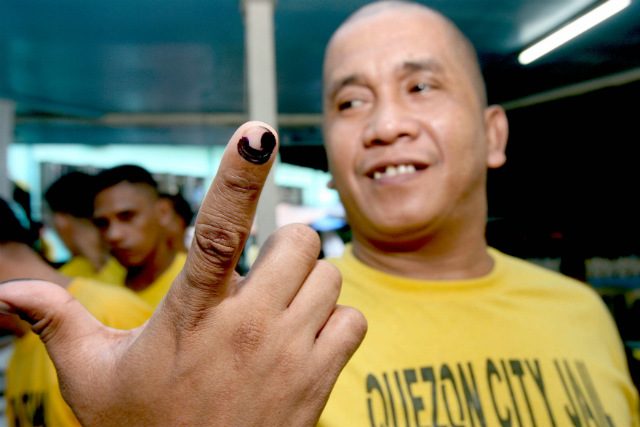 Facebook Twitter Copy URL
Copied
A lawyer says a Comelec resolution is unclear on the situation of high-profile detainees, such as former president Gloria Macapagal Arroyo

MANILA, Philippines – A lawyer has asked the Supreme Court (SC) not to allow all detainees in the Philippines to vote in the 2016 elections unless the Commission on Elections (Comelec) meets certain requirements.

In a petition dated November 12, lawyer Victor Aguinaldo requested the SC to bar the Comelec and other agencies from implementing Comelec Resolution 9371.

Promulgated in March 2012, Comelec Resolution 9371 covers “rules and regulations on detainee registration and voting” in the 2013 and subsequent elections.

If the SC grants Aguinaldo’s petition, this would mean “not allowing all the detainees in the entire Philippines to register and vote in the 2016 coming elections unless clear parameters or guidelines have been set as to cover all circumstances or incidents on detainee registration and voting.”

He said the Comelec resolution, for one, is unclear on the situation of high-profile detainees such as former president Gloria Macapagal Arroyo

He said, “What about those who are currently incarcerated under hospital or house arrest or in another jail not within their residence just like former president Gloria Macapagal Arroyo, Senator Ramon Revilla Jr, Senator Jinggoy Ejercito, and other detainees in similar situations?”

In his petition, Aguinaldo also said the SC should declare certain provisions of Comelec Resolution 9371 “as unconstitutional because of their imperfections, inadequacies, and deficiencies” in their application.

Aguinaldo enumerated the following “loopholes, uncertainties, gaps, and ambiguities” in the application of Comelec Resolution 9371: