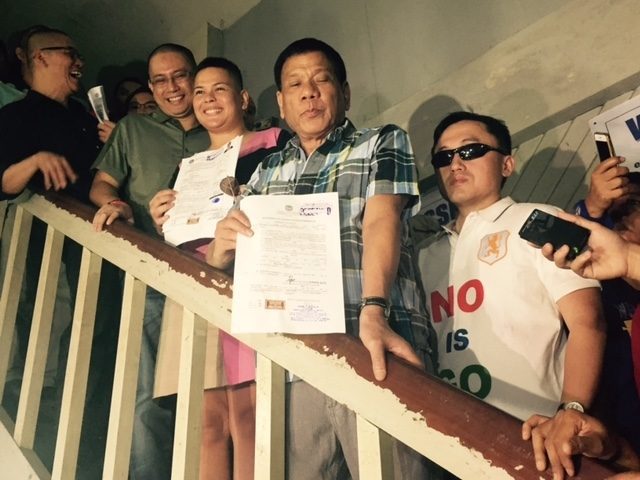 Duterte submitted his certificate of candidacy (COC) for president through a representative on Friday morning. He did not personally appear at the Comelec.

His daughter Sara Duterte Carpio, a former Davao City mayor herself, is running again for mayor as her father’s substitute candidate. The father and daughter appeared at the Comelec at around 11:20 am on Friday.

“Sara is here, she will run for mayor and I am withdrawing my COC because I am running for president,” Duterte said at a press conference on Friday.

With his COC for president filed, it is now up to Comelec to decide if Duterte can run for president. Hours after he filed, a petition was filed against his candidacy. (READ: Duterte faces 1st petition vs presidential bid)

“I really don’t know why I was brought into this crossroad. Whatever decision that Comelec [makes] about my candidacy, I will accept it,” he said.

Duterte is running under political party PDP-Laban who nominated him to take the place of Martin Diño, their presidential candidate who withdrew his COC on October 29.

On October 15, Duterte confused his supporters when his aide filed his COC for mayor, which seemed to dispel persistent talk that he was running for president. He had earlier cited the opposition of his family members, especially Sara, as among the reasons for his reluctance to take on the challenge.

Even after Duterte had filed his COC for mayor, PDP-Laban said it would nominate him as its presidential candidate in case of Diño’s withdrawal.

On November 21, Duterte declared that he was seeking the presidency, supposedly because of his displeasure over the Senate Electoral Tribunal’s decision against Senator Grace Poe’s disqualification case.

Sara was elected Davao City mayor in 2010, but did not seek re-election in 2013  to give way to her father.

Sara was the first to give an indication that her father is bent on a presidential bid. Days ahead of the filing of COCs, she posted a photo of herself on Instagram, having her head shaved, with “#Duterte2016” in the caption. (READ: Has Sara Duterte change her mind about #Duterte2016?) – With reports from Editha Caduaya and Pia Ranada/Rappler.com