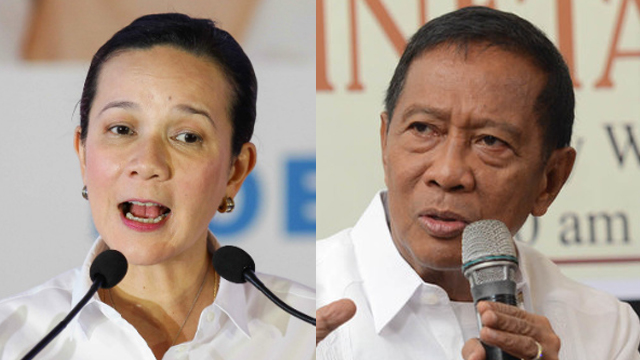 MANILA, Philippines (UPDATED) – Vice President Jejomar BInay will be the biggest beneficiary if presidential candidate and Senator Grace Poe is disqualified from the presidential race.

The Standard Poll said that Binay will be the front-runner, getting 33% of the votes, followed by former Interior secretary Mar Roxas with 29%, and Davao City Mayor Rodrigo Duterte with 26%.

Poll results also said it will be a very tight race between 3 presidential candidates – Binay, Poe, and former Interior secretary Manuel “Mar” Roxas II – if elections were held this December. The survey was conducted from December 4 to 12.

Given a ±2.6% margin of error, Poe – who still faces disqualification threats – leads by the narrowest of margins in the latest The Standard Poll. Nationwide, she obtained a 28% rating, compared to Binay’s 23% and Roxas’ 22%.

Duterte got 19% while Senator Miriam Santiago got 3%. 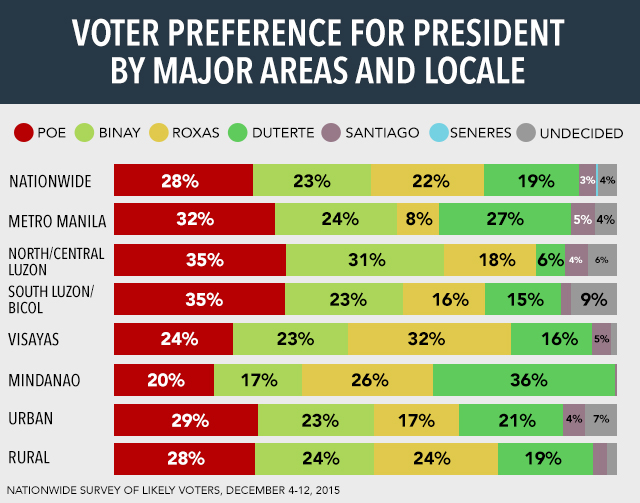 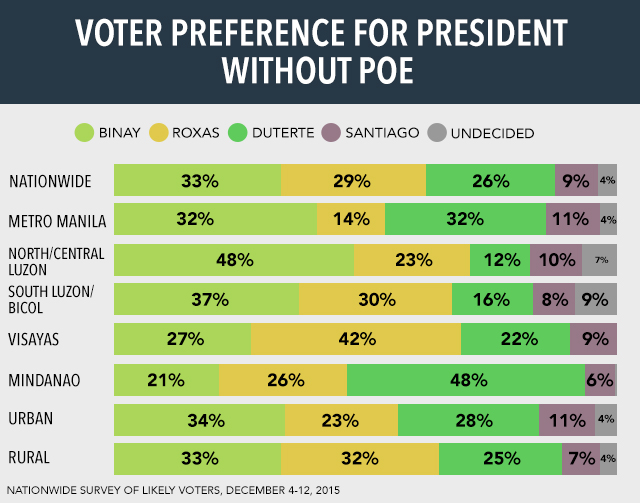 Poe has been battling citizenship and residency issues at the Commission on Elections. (READ: Comelec division disqualifies Grace Poe)

In a press statement on Monday, December 21, Poe said the poll results proved that Filipinos are not swayed by the legal and political maneuverings of her opponents.

“It gives me strength to know that our countrymen continue to stand with me in our pursuit of a better, livable and equitable society that benefits all Filipinos and not just a favored few,” Poe said. She added, “I remain committed to serving them as well.”

Poe’s core voter base, or those who are sure of not changing their preference, is 17%. Binay’s core supporters dropped from what his camp had claimed to be about 20% to 14%. Roxas’ core supporters stood at 13%; Duterte, 12%; and Santiago, 1%. 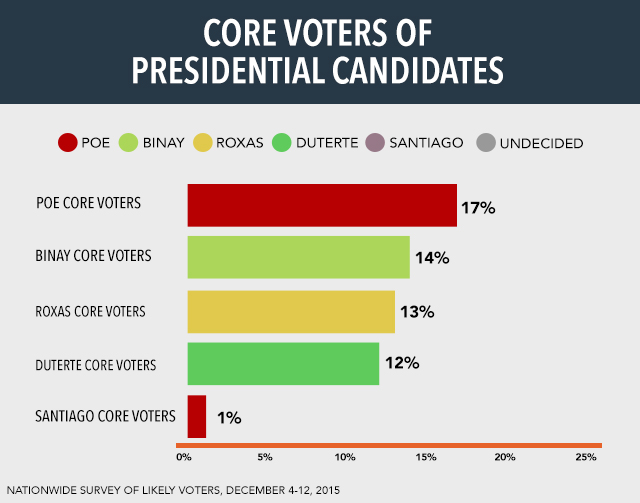 If for some reason, Duterte does not run, Poe will benefit the most, as her rating increases by 10 percentage points to 38%.

Binay will be the second beneficiary, gaining 7 percentage points and rising to 30%. Roxas will be hardly affected as he improves by a mere 1%. Santiago will benefit more than Roxas, increasing by 3 points to 6%. 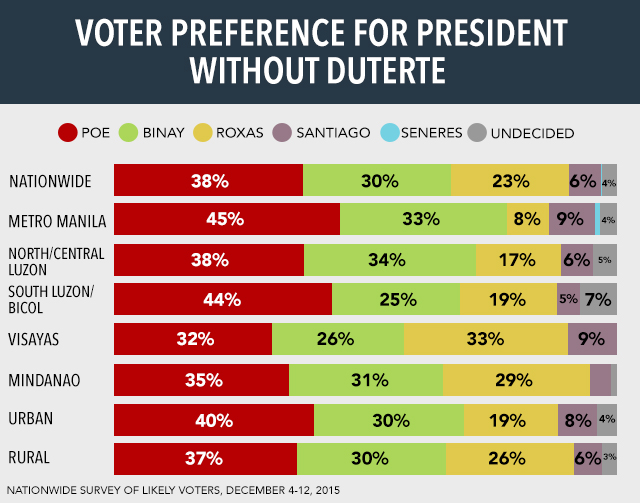 The survey, conducted by pollster Junie Laylo had 1,500 respondents, covering 76 provinces across the country and 17 cities in the National Capital Region. It covered respondents who were all registered voters with biometrics, and who said they were sure to vote in May 2016.

Among those voting for Poe, 31% said they will do so because they want to try her style of governance. 23% said they have not heard of any corruption issue against her, while 11% said they were attracted by her platform.

Among those voting for Binay, 23% said they are doing so because he might be able to replicate for the entire country what he has done in Makati. 16% said he has helped senior citizens, giving them free medicine, allowance, and benefits. 10% cited as reason the help he extends to overseas Filipino workers who face problems in other countries.

Among those who want Roxas, 52% pointed to the possibility of his continuing the 4Ps or poverty alleviation program of President Benigno Aquino III. 12% said Roxas has not been linked to corruption, while 9% said they are voting for him because they want to try his governance style and see if he can push the country to progress.

Supporters of Duterte are attracted to his ability to stop crime under his leadership (24%), his being a disciplinarian (21%), his governance style (14%), his ability to stop drug pushers and illegal drugs (13%), and his strictness in implementing the law (11%).

Santiago supporters said they are voting for her because of her courage (37%), she is not afraid to speak up and express her opinion (24%), she is intelligent and knowledgeable about governance (16%).

Roxas, for his part, has a strong hold over the Visayas (32%), while Duterte has the most number of supporters from Mindanao (36%).

Among those who own a mobile phone and have access to the Internet and social media, Poe was the preferred candidate for president, obtaining 28%, followed by Binay with 23%, Roxas with 22%, and Duterte with 19%. 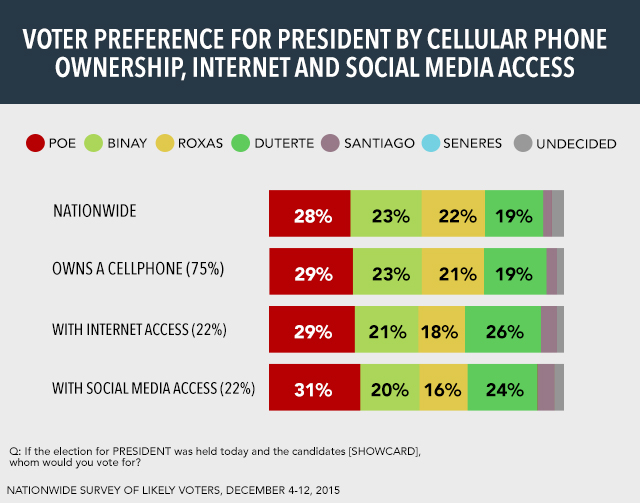 In terms of economic class, Duterte is most popular among the ABC classes (32%), while Poe dominates classes D and E (28% and 31%, respectively). 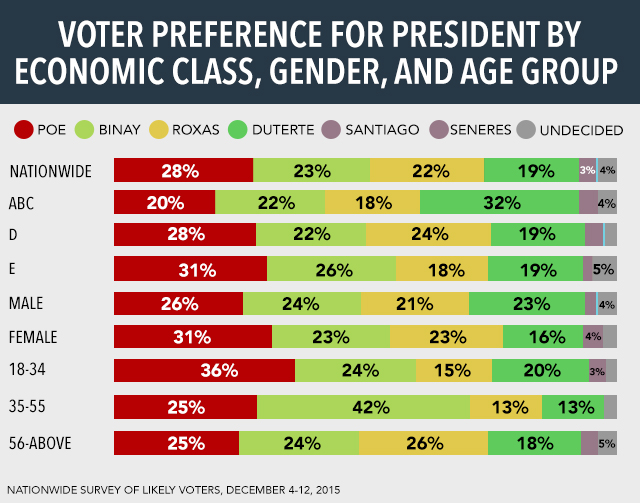 In terms of religious affiliation, among Muslims, Poe and Duterte are preferred (33% and 30%, respectively). The Born Again followers are for Poe, the Iglesia for Duterte (23%) and Binay (22%), and the Catholics for Poe (29%). 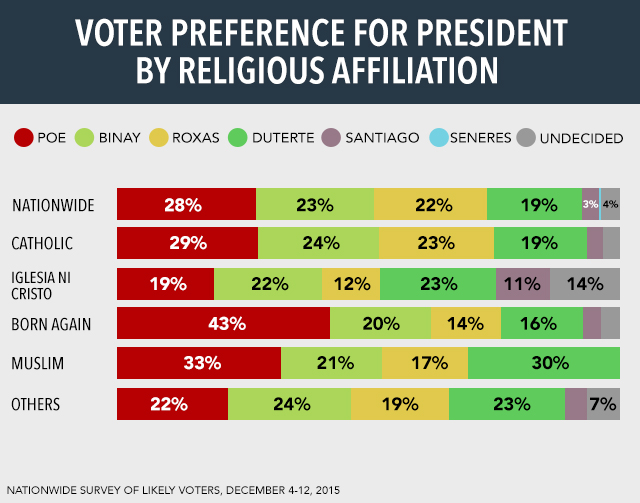