MANILA, Philippines (UPDATED) – Senator Francis Escudero kept his lead in the latest Pulse Asia survey on the 2016 vice presidential race, but Senator Ferdinand “Bongbong” Marcos Jr has closed in after a double-digit gain from his previous numbers.

It’s a 10-point jump for Marcos who was chosen by only 13% of respondents in a Pulse Asia poll conducted before the filing of certificates of candidacy (COC), September 8-14. The son and namesake of ousted dictator and former president Ferdinand Marcos is running with presidential candidate and Senator Miriam Santiago.

Escudero and Marcos were equally strong among respondents in the National Capital Region and Mindanao. But Balance Luzon, where Escudero’s Sorsogon province belongs, and the Visayas gave Escudero big wins.

Escudero pulled away with 33% in Balance Luzon and 27% in the Visayas. Marcos got 26% and 17% in the two areas with 3 points and 5 points error margins.

Escudero leads across all socio-economic classes. 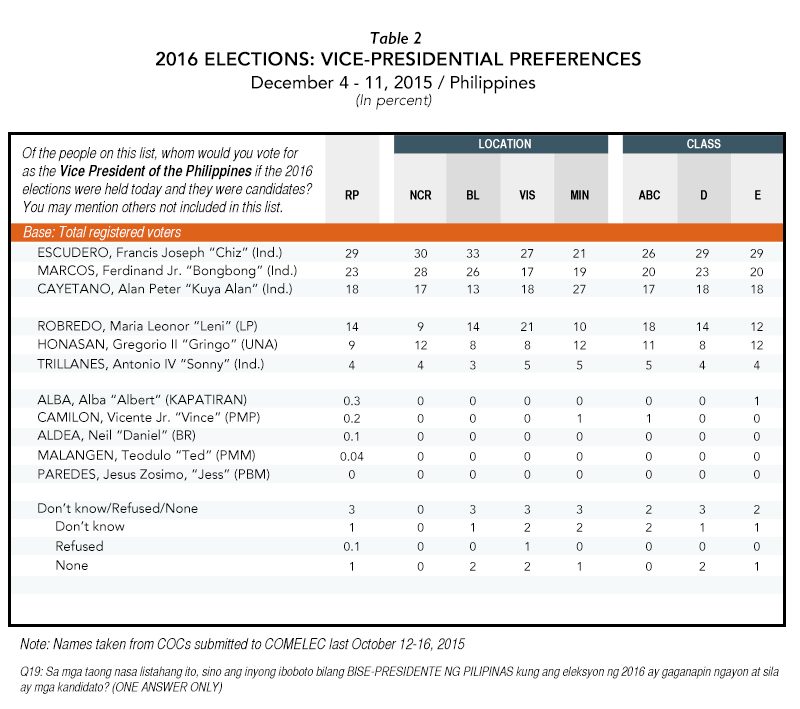 Marcos’ jump was also reflected in the survey released by the Social Weather Stations (SWS) two weeks ago, where his 24% was only 6 points behind Escudero’s 30%.

Administration candidate Maria Leonor “Leni” Robredo had the biggest gain in the survey – 11 points – from 3% in September to 14% in the new survey.

Senator Alan Peter Cayetano also gained 9 points from 9% in the September survey to 18% in the new survey. The Pulse survey has a 2% error margin.

The same trend was reflected in the SWS survey. All 4 candidates showed double digit numbers.

The official campaign period begins in February 2016. The elections will be in May 2016. – with reports from Carmela Fonbuena/Rappler.com