What now for Grace Poe? 3 things to expect MANILA, Philippines – With the Commission on Elections’ final decision stopping her from running for president in 2016, what are the options for Senator Grace Poe? How much time does she have to hurdle the legal obstacles to her candidacy?

Here are 3 things to expect after the Comelec’s decision:

Very much like her father’s journey during the 2004 presidential race, the senator will have to bring her case to the Supreme Court, which has the final say on whether or not she can run for president in May 2016. Poe herself has said that the ultimate battleground would be the High Tribunal.

The earliest that the Poe petition may be filed is on Monday, December 28, because the Court is on Christmas break, according to SC spokesman Theodore Te.

The Supreme Court justices are also on recess until after the New Year, but they can always hold a special en banc session during the break – depending on what the Poe camp would be asking for.

Once a petition is filed with the SC, the case is raffled off, based on internal rules, and a Supreme Court justice gets assigned to the case.

Given the small window it has between now and the printing of ballots in January 2016, will the Poe camp ask for a special raffle?

Rule 7, Section 7 of the Internal Rules of the SC states that a special raffle may be called should a pleading calling for a TRO cannot be included in the regular raffle.

The provision states: “Should an initiatory pleading pray for the issuance of a temporary restraining order or an urgent and extraordinary writ such as the writ of habeas corpus or of amparo, and the case cannot be included in the regular raffle, the Clerk of Court shall immediately call the attention of the Chief Justice or, in the latter’s absence, the most senior Member of the Court present. The Chief Justice or the Senior Member of the Court may direct the conduct of a special raffle, in accordance with the following procedure:

Poe’s spokesman and Valenzuela Mayor Rex Gatchalian said they believe the High Court, filled with appointees of President Benigno Aquino III and former President Gloria Macapagal-Arroyo, would be fair to the neophyte senator. “We believe that the SC will show impartiality and fairness,” Gatchalian told Rappler, reiterating that Poe remains a candidate.

Poe has to act quickly.

Commissioner Rowena Guanzon said any candidate has to immediately secure a temporary restraining order from the High Court against the Comelec en banc’s decision.

Based on Guanzon’s timetable, a candidate has only 5 days from receipt of the decision to secure a Temporary Restraining Order (TRO) or Status Quo Ante Order (SQA) from the Court. “Once we are finished promulgating the decision, the rules only afford 5 days within which you can get a TRO from the Supreme Court. Pag inabot po sila ng deadline at di sila nakakuha ng TRO ay hindi ho sila masasama sa balota. I’m not speaking about any particular candidate, yan lang po ang rule. Mas maganda na po na umakyat sa Supreme Court ang mga kasong ito,” Guanzon said.

(If they don’t meet the deadline to get a TRO, they will not be on the ballot. I’m not speaking about any particular candidate, that’s just the rule. It’s better for the cases to go up to the Supreme Court.)

The Comelec en banc on Wednesday agreed with Guanzon’s assertion that Poe only has 5 days to get a TRO.

Poe’s lawyer Garcia does not agree, citing Section 257 of the Omnibus Election Code which states that the poll body’s decision “shall become final thirty days after receipt of judgment.”

2. The Chief Justice may issue a TRO or SQA while the Court is on recess 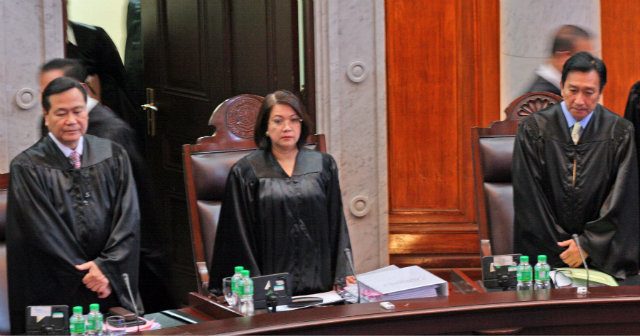 Te said Chief Justice Lourdes Sereno might still grant a writ – TRO or  SQA – depending on the recommendation of the SC justice assigned to the case.

“The Chief Justice can issue a TRO if the member in charge recommends it, subject to en banc confirmation later,” he said.

Asked if the en banc can overturn the Chief Magistrate’s decision, Te said there have been no instances like that in the past. “It has never been done [of] en banc revoking it. It usually confirms. It is done only when SC is in recess,” Te said.

It is also possible that the High Court convenes its special en banc session on December 28. Sereno earlier said the Court is prepared to act on urgent petitions even during the break.

Te stressed: “The Court can’t act on anything unless a petition is filed. It’s premature to talk of a special session cause there’s no petition filed yet. It will also depend on the recommendation of the member in charge.”

Another matter that will be likely discussed by the Court is the prescription period – whether 5 days, as earlier stated by Comelec, or 30 days, according to the Omnibus Election Code. The Comelec en banc decided on Wednesday that the poll body has from January 18 to 20 to finalize the list of candidates that will be printed on the ballots. Any names after that will no longer be accepted.

The SC is thus faced with another question: should it consolidate the Poe cases into one given time limitation?

The High Tribunal already scheduled oral arguments for the Poe case that’s pending before it – the Senate Electoral Tribunal verdict in her favor – on January 19. Will the justices decide to treat the Comelec case a separate one and therefore also hold separate oral arguments on it?

Comelec spokesman James Jimenez on Tuesday, December 22, said that until a case is resolved “definitively,” Poe’s name would still be on the ballot. But he also stressed the Comelec’s deadline.

“It becomes definitive when either natapos ung kaso with conclusiveness or at a Comelec level, wala na kaming magagawang iba. Kapag mayroon kaming decision tapos nagpunta sa Supreme Court tapos di natapos with the time left  sa editing (of data in its EMS), that’s not conclusive but at that point what else can the Comelec do, right? At that point maybe Comelec will decide to take it out or leave it [there],” Jimenez said.

The uncertainty naturally affects Poe’s campaign. Poe’s camp has questioned the timing of the Comelec’s decision.

“Why release the decision in haste when the holiday breaks are upon us? Is it meant to disadvantage Senator Poe’s legal response?” Gatchalian asked. – Rappler.com