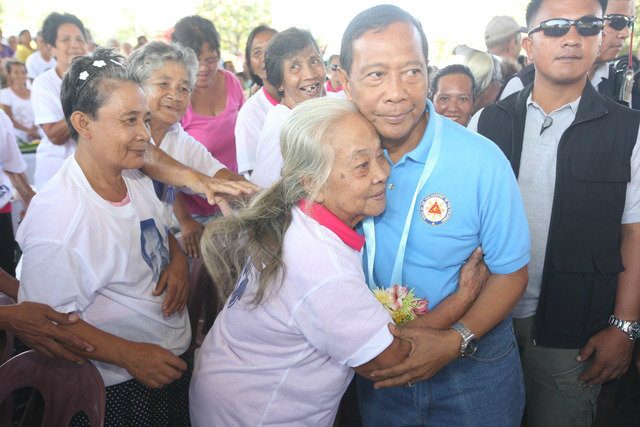 Facebook Twitter Copy URL
Copied
From ads, sorties, spokespersons, to the candidate himself, Binay stuck to a focused campaign message on poverty. Can he continue to evade corruption allegations?

MANILA, Philippines – In mid-2015, Vice President Jejomar Binay’s spokespersons fired the first shots in what would be a rowdy presidential campaign. Even before Senator Grace Poe announced her candidacy, Binay’s men faced cameras to declare her unfit to be president for supposedly lying about the length of her stay in the Philippines, and for being “stateless.”

When the Commission on Elections came to a similar conclusion in December, Binay’s spiky-haired allies and “American girl” soundbites were gone from the airwaves. There was one deafening response to Poe’s disqualification, Davao City Mayor Rodrigo Duterte’s cursing, and his verbal slugfest with administration bet Manuel “Mar” Roxas II: silence.

Silence became the strategy for the opposition leader who suffered from a major corruption scandal, and a series of communications gaffes. He evaded reporters, cut short chance interviews, and got his combative spokespersons busy with party work. It was when rivals wrote him off that he made the loudest noise: regaining his lead in the race.

(He did not want to meddle with the problems of the other candidates that have no bearing on him. His survey numbers won’t go up so he preferred to be quiet and just work.)

While some analysts attribute the comeback merely to his opponents’ disqualification cases or to his tireless barnstorming, Binay’s silent strategy in recent months reflects a more organized, disciplined campaign. From ads, sorties, spokespersons to the candidate himself, it wasn’t so much that Binay said nothing, but that he stuck to a focused campaign message. The dark horse in the 2010 vice presidential race, Binay was early on perceived to be a strong contender for the presidency. At 73, the former mayor of the financial center Makati is the oldest and one of the most experienced candidates for the May 2016 polls.

Yet in 2014, the once teflon aspirant took a heavy beating as his local rivals teamed up with administration-allied senators to mount the longest Senate inquiry into corruption allegations against the Binay dynasty. For over a year, accusations of million-peso kickbacks, rigged bids, and a lavish estate resembling London’s Kew Gardens put Binay in the headlines.

Overwhelmed, he cried political persecution, and refused to face the probe. As the hearings dragged on, he resigned from the Cabinet, and launched his opposition party, the United Nationalist Alliance (UNA). He attacked the “callous and failed” administration he was part of for 5 years, and its tuwid na daan or anti-corruption campaign.

This confused defensive-offensive message changed after Poe overtook him in June and he filed his candidacy in October. From discussing corruption, his biggest weakness, Binay harped on what he believes to be his strength.

“The moral problem actually is not corruption; the moral problem is poverty. That is what I have to face, not a fight against all these allegations but a fight to alleviate poverty in the life of every Filipino,” Binay told businessmen in October.

In a country hailed as Asia’s rising tiger, Binay’s goal is to illustrate that one in 4 Filipinos lives in poverty. This is his constituency, as seen in the December survey of Pulse Asia Research Incorporated, where he led in the socio-economic classes D and E.

While it’s tough to explain the millions allegedly in his and his dummies’ bank accounts, talking solutions to poverty, hunger, and jobs fits squarely with the Binay story line. In wet markets and schools, the Vice President recounts that his mother died of breast cancer without medication, and he became a house boy who worked his way up.

“We say in Makati, people should not die of poverty or because they cannot buy medicine or afford hospitalization. It’s not poverty that must cause people’s death,” he said.

Images of the second highest official hugging senior citizens, and eating with poor communities bolstered his spokespersons’ message of a “compassionate Binay presidency.”

Adding to the “empathy” theme, he highlights his “competence” as a former local chief executive to brand himself not just as the best but the only candidate who has and who will deliver health and education programs.

It’s a message encapsulated in his tagline and upbeat ad: “Only Binay.”

Incidentally, the Senate investigation abruptly stopped in August as its proponents focused on their vice presidential campaigns. Pulse Asia president Ronald Holmes told Rappler that timing favored Binay. The UNA standard-bearer scored 33% in December, much higher than his so-called core vote of 22% to 25%, and his September rating of 19%.

“I would say corruption is still an issue but it was not the most salient issue that had traction in the news. The headlines were not so much about the corruption allegations against the VP but the Duterte candidacy, and the disqualification cases against Poe,” said Holmes. With the message clear, execution through the messenger was next.

Previously open to freewheeling interviews where he would often get peeved, Binay began limiting his engagement even with friendly reporters by skipping questions on controversies or other candidates. When the boss goes off message, Ilagan and lawyer Rico Quicho, Binay’s spokesperson for political affairs, intervenes or signals that it’s time to go.

When reporters chased Binay in October to ask why he requested that a presidential debate format be changed to a one-on-one, he dodged them. Quicho apologetically faced the group, and joked: “Poverty! Poverty is the moral issue of the time.”

Access even to Binay’s schedule during provincial visits became so difficult that one frustrated reporter on the beat quipped, “Mas kailangan pa ata namin kayo kaysa kailangan ninyo kami eh (It seems we need you more than you need us).”

Stonewalling journalists was deliberate. “This was the approach he saw: going to provinces and explaining. Because the VP said he cannot get good treatment in Manila, especially in the media. He doesn’t get the chance, the good angle to explain,” Ilagan said.

The absence of negative news came with a blast of positive ads.

‘He focused on services he delivered in Makati but that begs the next question, at what price? This is the corruption issue that hasn’t been answered yet.’

Despite a freeze order on his and his supporters’ bank accounts, a leaked survey from research firm Nielsen Philippines shows that Binay spent P695.55 million ($14.66 million) in TV, radio and print ads in 2015. He was among the top spenders even before the start of the February campaign period.

The Vice President’s TV ads include one on the Senate probe (to say his ordeal is nothing compared to Filipinos’ poverty), nognog at pandak (to paint him as an underdog who performs), testimonials (to show benefits from Makati services), and Only Binay.

In January, Binay launched a new nognog at pandak series to say that the average Filipino is dark-skinned, short, and “poor” like him. In the ad, the candidate says, “Sino pa ba ang magtutulungan kundi tayo (Who else will help each other but us)?”

“He maximized the comments against him. He spins it positively to say that the person others are criticizing is the one who has done things. What others are still planning, Binay has already done. He focused on services he delivered in Makati but that begs the next question, at what price? What did he earn? This is the corruption issue that hasn’t been answered yet.” 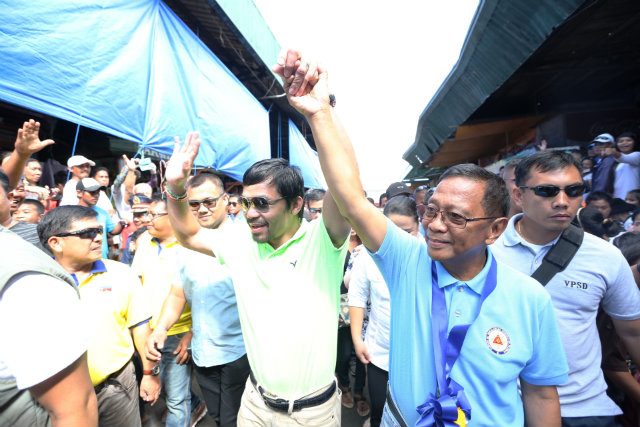 The Pacquiao and Visayas coup

Binay’s tried and tested ground campaign from 2010 sought to reinforce the poverty message bombarded in ads.

Preparing for these trips is the job of UNA and “parallel groups,” an umbrella term for non-partisan Binay supporters. These include volunteers, the Makati network that benefited from patronage, sister cities, the Alpha Phi Omega fraternity, and the Boy Scouts of the Philippines. Overseeing the campaign is a core group of decision-makers and advisers, including the Binay family.

Speeches, press releases, and radio interviews are tailor-made for the province. Binay cites the poverty incidence specific to a region, and the particular problems of the community.

When he was in Bohol over the weekend, he said plans to build an airport in Panglao back in 2010 remain unfulfilled. “Until now, I can still hear it. That’s still the problem.”

Binay’s familiarity with local issues is a result of his early and relentless ground work. His ally former senator Ernesto Maceda estimates that Binay is now on his fourth round of visits to the provinces.

The Binay team declared him the first national official to check on towns hit by Typhoon Nona in Northern Samar in December. At the start of 2016, daughter Senator Nancy Binay tweeted that her father was the “1st presidential candidate to visit Camotes Island [in] history,” referring to the remote diving area in Cebu.

In going around the Philippines, Binay has a free celebrity endorser: boxing champion and Sarangani Representative Manny Pacquiao. The UNA senatorial bet stuck it out with Binay despite the candidacy of his friend, Duterte. With his own rags-to-riches story to tell, Pacquiao proved to be a walking exhibit of the poverty message.

Besides Pacquiao’s endorsement, topping in the Visayas in Pulse Asia was another upset. Binay scored 34% in what is known to be his Achilles’ heel and the bailiwick of Roxas, who was just second at 27%. The former interior chief’s allies said the result was “illogical.”

“The Visayas is not a monolithic region,” said Holmes. “There are indicators the Vice President is getting support in Samar, Leyte, and beyond the Yolanda areas, in provinces like Negros Oriental so you have a splattering of support. I don’t take it as a question of overtaking [Roxas] but just getting a sizable share.”

Binay continues to criticize Roxas’ response to Yolanda as “incompetence.” During the monster storm’s second anniversary in November, the UNA chairman pointed out that poverty even worsened in Eastern Visayas. Is the Vice President unstoppable? Roxas’ Liberal Party warns that Binay’s numbers are bound to dip again once the public is “reminded” of claims he amassed wealth from Makati.

While Binay managed to keep a low-profile, DLSU’s Cuarteros believes there is a difference between his camp’s line of “directly talking to the people,” and candidly answering lingering questions about corruption.

“If there is new evidence that will come out, and it’s strong enough to convince people, that will stick as an issue. But if it’s the same Makati [City Hall] Building II and cakes, that has been set aside by most people except the thinking crowd,” the analyst said.

Holmes agrees that Binay’s lead is not secure, saying voter preference is still fluctuating 5 months before the polls. He points out that in 2010, then presidential bet Benigno Aquino III also led the December survey only to be locked in a statistical tie with former Senator Manny Villar in January.

“It will be much more heated. Both for the presidency and the vice presidency, it’s too tight to call. It’s not a safe race for anyone at this point. They really have to work hard in order to maintain the level of support,” Holmes said.

Whatever controversy comes out and whatever happens to his opponents, the Binay camp thinks its principal is prepared and confident with his message.

With election debates coming up, the question is whether or not Binay’s message of eradicating poverty will be the only issue people will demand answers on. – Rappler.com