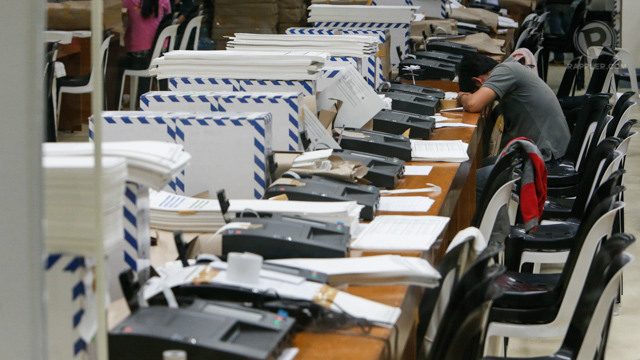 Facebook Twitter Copy URL
Copied
Without a final ruling from the Supreme Court on the disqualification cases, the names of Poe and Duterte will have to be included in the ballot.

MANILA, Philippines – The Commission on Elections (Comelec) said it is moving the start of ballot printing to February 1 from the original January 27, as the final list of candidates remains in limbo.

Jimenez also said the Comelec will release an initial list of candidates on the ballot next week.

The change in schedules comes as pending petitions leave the Comelec hanging.

Leading presidential aspirant Senator Grace Poe, for one, has filed petitions against the Comelec before the Supreme Court (SC).

Poe wants the SC to junk the Comelec ruling that would cancel her certificate of candidacy and take her out of the ballot.

Another leading presidential aspirant, Davao City Mayor Rodrigo Duterte, is facing petitions before the Comelec to also stop him from running.

Duterte on Friday filed a memorandum asking the Comelec to junk these petitions “for lack of merit.”

This is different from the ballot printing, which had originally been set on January 27.

Without a final ruling from the Supreme Court on the disqualification cases, the names of Poe and Duterte will have to be included in the ballot. – Rappler.com