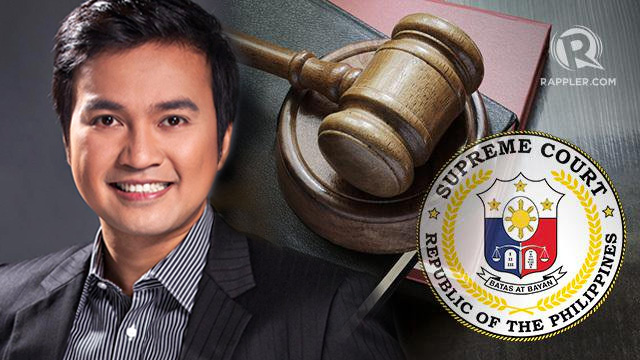 The HRET decision came a day after the Supreme Court (SC) also maintained its earlier ruling that “denied with finality” the motion for reconsideration filed by the House of Representatives, through its Office of the Solicitor General (OSG), in favor of Reyes.

This was confirmed to Rappler by at least two members of the HRET.

Marinduque Representative Lord Allan Velasco had protested Reyes’ assumption to office as congresswoman. The Commission on Elections (Comelec) had cancelled Reyes’s certificate of candidacy on the grounds that she was a naturalized American citizen during the 2013 elections.

Last December 14, the HRET voted 4-3 that the protest was no longer under its jurisdiction. It in turn acknowledged the High Court’s decision that Reyes is considered disqualified from the 2013 polls.

Reyes‘ camp had contended that the HRET’s ruling was invalid. They said that Gabriela RepresentativeLuzviminda Ilagan, who voted in favor of Velasco, was no longer a lawmaker when the decision was rendered.

Reyes’ lawyer Harry Roque claimed that Ilagan is considered resigned from her post as a member of the 16th Congress after she filed her certificate of candidacy (COC) to run as Davao City councilor last October 12. (READ: After SC ruling, will the House swear in Velasco as Marinduque rep?)

Ilagan defended that the rule only is only applicable to party-list representatives shifting political affiliation or sectoral representation. It didn’t apply to her because she is seeking a local government post in 2016, and she can finish her term in the 16th Congress.

“We hope this decision clears all doubt on the validity of the decision made last December 14 as well as any misconception on the legitimacy of the vote rendered by Gabriela Women’s Party Rep. Luzviminda Ilagan on the aforementioned petition against Ongsiako-Reyes,” said Gabriela lawyer Minerva Lopez.

On January 12, the SC voted 8-1-6 to recognize Velasco as the rightful winner of the 2013 congressional election.

The SC ordered Speaker Feliciano Belmonte Jr and the OSG to allow Velasco to take his oath and be part of the roster of the elected House members.

The ruling also stressed that Reyes’s oath as Marinduque representative was invalid because she had no valid certificate of candidacy when she was sworn into office.

“Comelec in SPC No. 13-010 cancelled respondent Reyes’ proclamation and, in turn, proclaimed Velasco as the duly elected member of the House of Representatives,” said the decision released January 12.

On Tuesday, January 26, the High Court denied with finality Reyes’ motion for reconsideration of its January 12 ruling.

Despite the clear HRET and SC rulings in favor of Velasco, Speaker Belmonte said the House leadership is still mulling whether to swear in Velasco.

“We are still studying it. But we will definitely decide before we adjourn,” Feliciano told Rappler in a text message.

Belmonte is the party mate of Reyes. They both belong to the ruling Liberal Party.

The Speaker had twice defied rulings to install Velasco. – Rappler.com