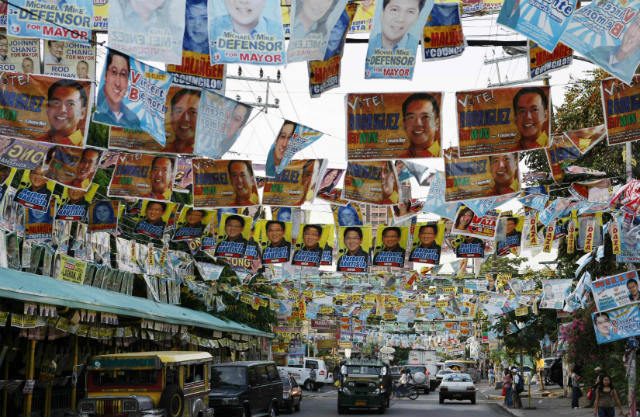 Facebook Twitter Copy URL
Copied
The DENR, DILG, and Comelec call on political parties and candidates to clean up after campaign events and on election day

MANILA, Philippines – Three government agencies will work together to ensure the holding of 2016 elections respects the country’s law on garbage management.

The launch of the drive renews a commitment made by the DENR, the Commission on Elections (Comelec), and Department of the Interior and Local Government (DILG) to make sure candidates will clean up after themselves during both the campaign season, which begins on February 9, and election day on May 9.

The 3 agencies have signed a manifesto of commitment to implement a Joint Memorandum Circular they issued in preparation for the mid-term polls in 2013.

The agencies once again vow to keep an eye on political parties, national and local candidates, and their supporters to make sure they abide by the Ecological Solid Waste Management Act of 2000 (Republic Act No. 9003).

“With the number of candidates on the campaign trail, one can just imagine the volume of campaign materials that will be generated and most of these will end up as garbage,” said Environment Secretary Ramon Paje.

Specifically, they are asked to clean up posters, flyers, banners, and other elections paraphernalia after campaign events and election day on May 9.

Political parties and candidates will also be told not to cut, destroy, or damage trees and plants of scenic value along public roads, plazas, parks, schools, or other public places not designated as common poster areas.

“This is the topmost concern we have and our partners in the green movement who are intensifying their campaign for a greener election, calling on the candidates themselves to clean up their act,” said Paje.

A total of 45,990 individuals filed their certificates of candidacy (COCs) for 14 national posts, 59 party-list representatives, and 18,010 local posts.

The campaign also has the support of the Metropolitan Manila Development Authority and environmental civil society groups.

One green group, EcoWaste Coalition, even picketed in front of the Comelec office in October 2015 with more specific demands.

The renewal of the 2013 Joint Memorandum Circular was part of EcoWaste Coalition’s wish list. – Rappler.com