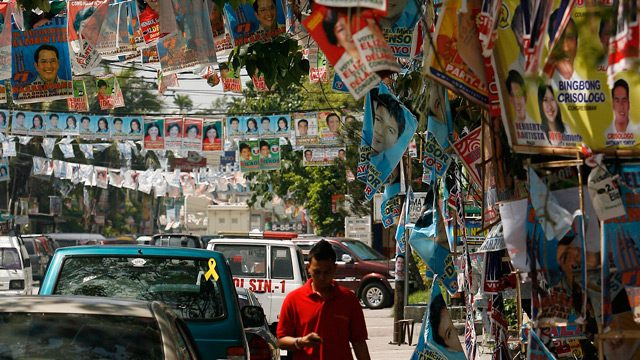 Facebook Twitter Copy URL
Copied
The poll body also partners with the MMDA and public works department, which will remove signages that bear the names of government officials running in 2016

MANILA, Philippines – A week before the start of the official campaign period, the Commission on Elections (Comelec) called on the public to join its online “shame campaign” by reporting political camps that will violate election propaganda rules.

(We want the people to join and help take photos of campaign paraphernalia that are posted in areas where they’re not supposed to be posted.)

(Social media is very prevalent nowadays. Photos posted might go viral and might affect their campaign. [People online] might see that they are not following the law. In effect, they may not get votes.)

Posted by Commission on Elections on Sunday, December 13, 2015

The partnership aims to encourage the use of recyclable and environment-friendly campaign materials and prevent “wasteful and polluting campaigns” through littering and “irresponsible” disposal.  (READ: Gov’t aims for ‘garbage-free’ 2016 elections)

Under the agreement, DPWH and MMDA are authorized to take down paraphernalia that are posted on trees, plants, and private or public places outside the designated areas.

The public areas where posting of campaign materials is prohibited include:

In local government units outside Metro Manila, the DPWH will ask help from the Philippine National Police (PNP) and the Armed Forces of the Philippines (AFP) to control roads where seating officials, also seeking elective posts, are dominant.

“We are announcing [this] one week before the actual implementation. We are giving fair warning to our candidates,” Bautista said.

DPWH also reminded candidates that they will remove “epal” posters or those signages of local projects that bear the names of incumbent officials.

“We will continue to campaign against any politician who will use [a] project billboard,” Singson said during the MOA signing.

Bautista stressed that, aside from “epal” tarpaulins, that greetings from politicians and and brand endorsements are also prohibited under the Fair Elections Act.

The poll chief also noted that they cannot keep private persons from posting their own endorsements. However, Comelec will just have to provide limitations on the size of these publicity materials.

Candidates who violate these rules will face imprisonment for one to 6 years, not subject to probation. They will also be disqualified from seeking public office and be ineligible to vote.

As soon as Comelec received reports from its partners – and even from the netizens – it will investigate whether a misplaced poster was authorized by a candidate or a political party.

Bautista said they have yet to clarify the arrest procedure in the coming weeks, but said the first step is to remove posters from prohibited areas.

Campaign for the national posts will kick off on Tuesday, February 9. Local candidates may start campaigning on March 25. Read Rappler’s story to know the complete list of prohibited acts during the campaign season. – Rappler.com