SC affirms disqualification of more bets for May 2016 polls 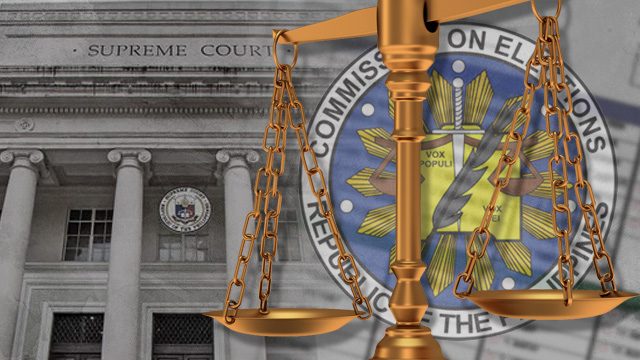 MANILA, Philippines – The Supreme Court affirmed on Tuesday, February 2, the disqualification of more aspirants vying for various national posts in the May 2016 polls.

In its latest en banc session, the High Court dismissed the petitions of the following individuals to reverse the earlier ruling of the Commission on Elections (Comelec) that declared them nuisance candidates:

SC claimed “Comelec did not act with grave abuse of discretion” in disqualifying them.

The number of presidential candidates has since dropped to only 6, after the disqualification of independent candidate Dante Valencia and the withdrawal of Pwersa ng Masang Pilipino’s Mel Mendoza.

Valencia’s and Mendoza’s names remain in the draft ballot, however, until the Comelec finalizes the list of candidates on February 3.

The High Court also dismissed the petitions of the following groups, who appealed Comelec’s refusal to accredit them:

They are among the 213 party-list organizations that filed in 2015 their intent to join the May 2016 polls, but were not included in Comelec’s “final” list.

The names of the first 7 party-list groups above were among the 84 whose inclusion in the party-list raffle – which determines their order of listing on the official ballot – was initially up in the air due to pending motions for reconsideration before the Comelec en banc by the time the Comelec issued Resolution 10025 on December 3, 2015.

The names of the last 3 party-list groups were not in the same resolution, while ALIF is listed in the Comelec resolution as among those “for consideration of the Commission en banc.”

SC also ruled that “Comelec did not act with grave abuse of discretion” in disqualifying them.

Apart from these, the SC also dismissed the petition filed by the following parties for lack of merit:

The High Court already affirmed on January 12 the Comelec’s disqualification of these poll aspirants, but they still filed a motion for reconsideration. – Rappler.com