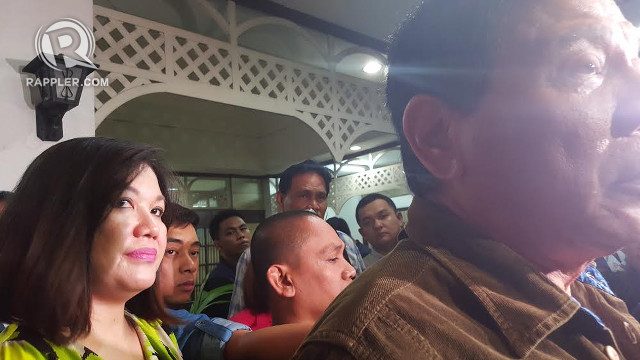 MANILA, Philippines – The woman who shares Rodrigo Duterte’s home and is mother to his youngest child joined him on the campaign trail for the first time.

In a floral dress and wearing minimal make-up, she listened to Duterte’s more than one-hour speech and was beside him during an ambush interview with the media.

“Alalay lang ako. Sa likod lang niya (I’m just his assistant, always just behind him),” she said to reporters from behind Duterte.

She earlier told Rappler she was something of a personal assistant and personal nurse, watching his choice of clothes, making sure his health does not suffer from the back-to-back events he will be attending.

This is the first time Avanceña has appeared in public with Duterte outside Davao City.

Duterte considers Avanceña his second wife even if they are not married legally. His marriage to his first wife, Elizabeth, was annulled. Elizabeth is the mother of Duterte’s grown children – Sara, former Davao City mayor; Paolo, current vice-mayor; and Basti. Avanceña usually keeps a low profile, avoiding public events. But this time, she said she wanted to see for herself Duterte going around the country.

True enough, she stood quietly behind Duterte as he jokingly wiped the bare arm of a female television reporter who was sweating from the heat.

Duterte is known to call the attention of beautiful ladies during events he attends.

In public, he has bared the details of his relationships with two girlfriends.

A source close to the family said Avanceña would always ask him about any woman requesting to speak with him.

On Wednesday, after his speech, Duterte himself joked in her presence, “Kasi nahuli ako kaya buntot nang buntot ‘yan (I was caught that’s why she’s now following me).”

On his alleged involvement with death squads in Davao City, Avanceña said, “Hindi niya ginagawa yun (He doesn’t do that).”

She insisted that Duterte has been honest with the electorate, right from the start, about who he is as a person.

”You know what, inunahan na niya lahat, kwinento niya, sinabi niya para wala na kayo sisilipin sa kanya,” said Avanceña. (You know what, he pre-empted everyone, he told all so there’s nothing to hide from you.)

Will Avanceña become the country’s First Lady if Duterte wins in May? Duterte said, “Para walang away (So there is no fighting)” he would make Sara his First Lady.

When the campaign season starts on February 9, insiders said Sara and Paolo will likely be joining him in sorties. – Rappler.com