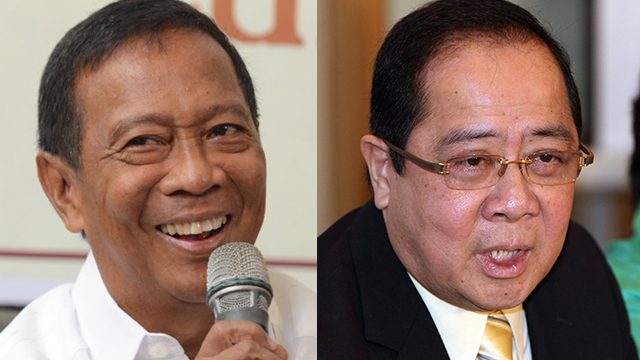 Facebook Twitter Copy URL
Copied
Vice President Jejomar Binay says his recovery in recent poll surveys is a 'team effort,' and not just because of the help of the former interior secretary

“Talagang tinutulungan kami ni Secretary Puno, at saka magaling siya (Secretary Puno is really helping us, and he is good),” Binay told reporters as he visited several municipalities in Quezon on Friday, February 5.

United Nationalist Alliance (UNA) spokesman Mon Ilagan told Rappler that Puno, National Unity Party secretary-general, has been helping out in Binay’s campaign since 2015. An Inquirer report said he is doing this for free.

(He is good! Because you know, he is battle-scarred. He was a campaign manager in several elections and he has good ideas. Very innovative.)

Puno’s presence in Binay’s campaign team is crucial because he was the political strategist credited with the victory of 3 presidential candidates – Fidel Ramos, Joseph  Estrada, and Gloria Macapagal Arroyo.

Puno served the Arroyo administration as interior secretary and as presidential adviser on political affairs.

The Vice President dismissed allegations that Puno was behind the reported poll fraud that paved the way for Arroyo’s victory over actor Fernando Poe Jr in the 2004 presidential race, which earned him the moniker “magikero (magician)” in political circles.

To this, Binay replied: “As usual, I don’t want to reply on a question like that. Kasi biktima ako niyan, bintang bintang, demolition by perception….So lahat iyan puro bintang.”

(As I usual, I don’t want to reply on a question like that. This is because I am also a victim of accusations like that, demolition by perception….All of these are mere allegations.)

The Vice President, however, has bounced back, leading in the latest Pulse Asia and Social Weather Stations surveys. (READ: Binay’s strategy of silence)

Binay said his resurgence in election polls cannot just be attributed to Puno.

(It’s a collective effort; it’s a group work. So everyone has participation. Everytime we see each other, we exchange notes until we arrive at a final decision.)

Binay’s camp remains unfazed despite a string of negative advertisements against him as well as the Ombudsman’s latest move to uphold its decision  to indict him over an allegedly overpriced building in Makati, where Binay was mayor for 21 years.

(In fact, many of the political analysts admitted they never expected I’d recover. They said I’d continue to fall.)