Duterte showing too much love for Pampanga supporters? 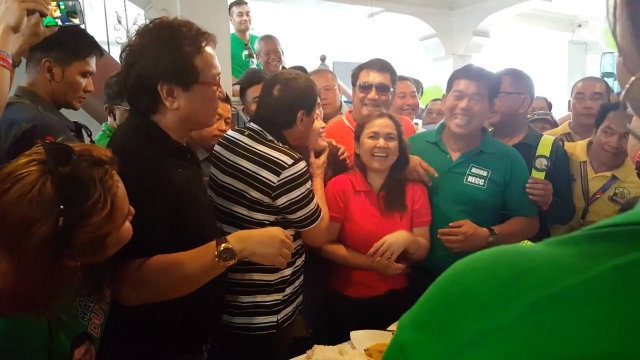 While formally opening the provincial headquarters of his supporters, Duterte gave some of his female supporters a bit of love.

He rewards some of them with a public display of affection.

The girls don’t seem to mind.

He admits he went on a kissing spree with some of his prettier supporters.

RODRIGO DUTERTE, PRESIDENTIAL CANDIDATE: I haven’t been to a place where I’ve kissed as many girls. Lips to lips, even with tongue, because it’s delicious. Never mind if I lose, as long as I get to kiss all the beautiful women.)

His Pampanga campaigners say volunteers chipped in with their own funds and resources.

ALLAN GARCIA, DUTERTE PROVINCIAL CAMPAIGN MANAGER: Mayor Duterte arrives on a limited budget. We won’t mind that because I’m proud to say that the piso-piso for true change, every peso will count.

On display are a kaleidoscope of Duterte t-shirts and accessories.

His supporters listen intently as he explained his platform.

They cheered, especially when he expressed his determination, Duterte-style.

AGNES ESPIRITU, DUTERTE SUPPORTER IN PAMPANGA: I will really campaign for him because this is the start of change.

With his campaign taking off supporters are ready to stick with him until the very end.