2016 elections: How much can a presidential candidate spend?

Facebook Twitter Copy URL
Copied
The unrealistic spending cap set by law allows a presidential candidate to spend P836 million at the most for this election. See how expenses for local campaigns are computed.

The commencement of campaign period means that those who filed their certificates of candidacy (COC) between last October are now officially considered as “candidates.” This follows the Supreme Court ruling in Penera vs. COMELEC (GR Number 181613, November 25, 2009) that known aspirants, who put out propaganda meant to increase their awareness, are not considered to be doing premature campaigning.

With that commences the counting of the campaign expenses, pursuant to Republic Act Number 7166 (November 26, 1991) or an Act Providing for Synchronized National and Local Elections and for Electoral Reforms, as implemented by Comelec Resolution Number 9991 (October 2, 2015).

Under Section 13 of Republic Act Number 7166, the maximum amount that can be spent for election campaign by candidates and political parties are as follows:

1.For candidates. – Ten pesos (P10.00) for President and Vice-President; and for other candidates Three Pesos (P3.00) for every voter currently registered in the constituency where he filed his certificate of candidacy: Provided, That a candidate without any political party and without support from any political party may be allowed to spend Five Pesos (P5.00) for every such voter; and

2.For political parties. – Five pesos (P5.00) for every voter currently registered in the constituency or constituencies where it has official candidates.

Based on the above provisions, the number of registered voters in the constituency where the candidate filed his certificate of candidacy (COC) determines how much can he spend for his campaign.

On top of this, their political party is separately entitled to spend P278,696,980 (55,739,396 total registered voters x P5) for the campaign. That means P5 for the entire slate per voter, or they may opt to spend the P5 on just one candidate.

If the spending that a party is allowed goes to the presidential candidate only, this means the standard-bearer is allowed to spend a total of P836,090,940 at the most.

Take note that this expense cap covers only those expenses incurred during the campaign period – as enumerated in Section 3 of Comelec Resolution 9991. They exclude those spent for the following: 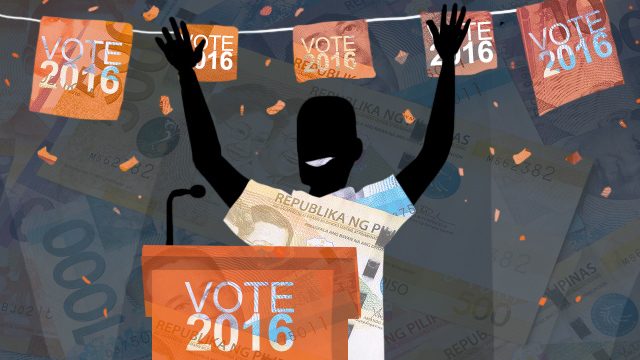 The most common complaint of politicians is that the expense cap set in 1991 is unreasonably low to stage a campaign. While this claim may seem hyperbolic looking at the above figures, it however makes sense when scaled down to the context of a local campaign.

For example, candidates running in a municipality with a voting population of 10,000, would have an expense cap of P30,000 (10,000 registered voters x P3). This would mean that if that municipality has 20 barangays, that would translate to P1,500 per barangay, an amount which would not even allow one to rent a decent sound system for a barangay caucus.

This poses a problem as either you comply with the unrealistic expense cap and compromise your campaign (which no one will do) or lie about your real expense. The Commission on Elections, in many instances, has recognized this problem and in fact been very vocal in campaigning for the adjustment of the cap. Unfortunately, these corrective bills are still pending before the Senate or the House of Representatives.

While the above rules may seem straightforward, even elementary, many candidates still get this wrong. Some were too honest (or rather, stupid) to declare an amount that exceeds that in their SOCE or Statement of Contributions and Expenditures. Their most common excuse is that they do not know the rules on campaign finance. Most, however, simply do not take the spending cap seriously, thinking that it’s perfunctory and inconsequential. This is understandable since the present version of the law has been there since 1991, but never been fully implemented.

EXPLAINER: Why ‘candidates’ can spend so much and not report it
Remember ‘Team Patay’? Here’s how it will affect campaigning now

It was only in 2013 that Comelec created the Campaign Finance Unit (CFU) under Commissioner Christian Robert Lim. Its sole mandate of monitoring campaign spending, educating the public, receiving the SOCEs, auditing, and filing appropriate cases if needed.

The CFU was able to successfully pursue high profile campaign expense cases, like the one of then Laguna Governor ER Ejercito, who was consequently disqualified retroactively. It was a great reminder to everyone not only of the importance of stating your campaign finances correctly, but also of the terrible consequences when you don’t.

Next week, I will discuss more about campaign finance, the common errors and mistakes committed by candidates, consequences of violating the rules, including the case of  ER Ejercito. – Rappler.com