Duterte launches campaign: If I make a promise, I’ll do it 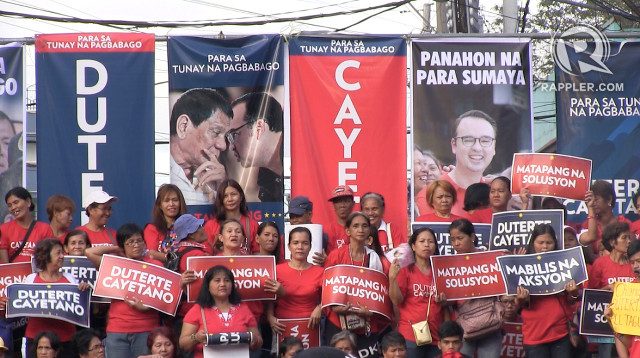 Facebook Twitter Copy URL
Copied
'I will do it even if I lose my life, my honor, and even the presidency,' says Duterte during his proclamation rally, offering his political will as his best asset

MANILA, Philippines – Sheer political will was the trait Davao City Mayor Rodrigo Duterte sought to sell to voters at his proclamation rally in Tondo, Manila, on Tuesday, February 9.

“I have promised you something and if you know me, I will really do it,” he told a crowd of around a thousand people gathered in an intersection in Tondo.

“I will do it even if I lose my life, my honor, and even the presidency,” he added.

There were no pre-written speeches for Duterte and running mate Senator Alan Peter Cayetano during their campaign kick-off event.

As irreverent as ever, Duterte teased the crowd, even refusing to face a certain part of the audience because he found more beautiful women on the other side. (READ: Duterte showing too much love for Pampanga supporters?)

As usual, his speech was peppered with expletives. This only stoked the crowd’s enthusiasm because the cursing was directed at the supposed sorry state of affairs in the country.

Rody #Duterte bows in front of crowd in his proclamation rally in Tondo. #PHVote pic.twitter.com/C8ZGV744SX

Such corruption will end under a Duterte presidency, he promised.

(Corruption will really stop. I’ve given myself only 3 to 6 months. Because if I am president and I cannot stop all these fuck-ups in the Philippines in one or two months, they will not stop even if you give me 10 years.)

He repeated his advocacy for federalism, saying it is the “last card” the Philippines can offer to separatists in Muslim Mindanao if the proposed Bangsamoro Basic Law is not realized.

If elected president, Duterte said he would allot the biggest budget to 3 sectors: education, agriculture, and health services.

He said he would continue the  Aquino administration’s Pantawid Pamilyang Pilipino Program (4Ps) but with an added livelihood component. His conditional cash transfer initiative would include loans for poor but bright Filipinos who want to put up small and medium enterprises.

Cayetano also emphasized Duterte’s political will and credibility as his top assets as a future president.

Cayetano said that in stopping corruption, rival candidate Senate Grace Poe is a neophyte who can easily be fooled by other politicians while Vice President Jejomar Binay is facing corruption charges.

Cayetano, introduced as the “senator who asks the hard questions,” also took a swipe at the Aquino administration for not doing enough to solve problems like Metro Manila traffic.

The root of the problem, he said, is the concentration of development and government investment in Metro Manila, at the cost of progress in other regions.

Members of the audience randomly picked by Rappler for an interview said they will vote for Duterte.

For 56-year-old government employee Robert Tuason, Duterte is the only candidate who will do what he promises “unlike other candidates who say the same but nothing happens,” he said in Filipino.

(If ever he wins as president, he should lessen or if not avoid cursing in public because cursing is not good.)

Duterte called on stage senatorial candidates he is endorsing. These include:

Standing next to Duterte on stage as he delivered his speech were his common-law wife, Honeylet Avanceña; and their young daughter, Veronica. (READ: Duterte’s common-law-wife joins in in Manila events)

During the same event, Duterte took his oath as chairman of political party PDP-Laban.

But being Duterte, he gave the crowd a naughty look as he raised his left hand instead of the customary right, explaining he is a Leftist in terms of political beliefs. – Rappler.com