Duterte: ‘Don’t worry’ about my health 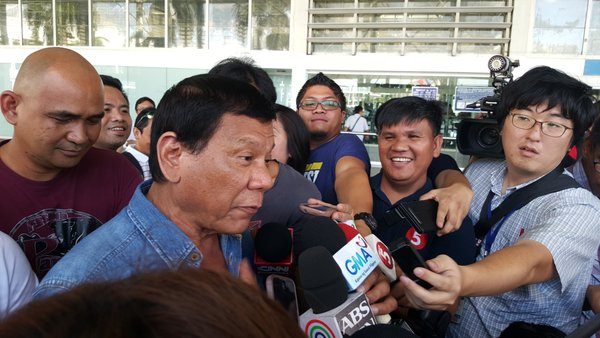 “Don’t worry about my health, worry about yourselves,” he said, addressing worried supporters.

He granted media a last-minute interview at the Ninoy Aquino International Airport (NAIA) Terminal 2 before his 3 pm flight to Davao City.

Duterte said he had a headache and bronchitis. Because he forgot to take his maintenance medication, he was vulnerable to heat and low resistance.

He confirmed that he stayed at Cardinal Santos Medical Center in Greenhills for some tests Thursday, February 11.

“I stayed overnight. I am on antibiotics. I have to continue the medication. Uwi ako, pero okay na (I’m going home, but I’m okay now),” he told the media gathered at NAIA Terminal 2.

There were rumors he had a mild stroke after he pulled out of a medical association’s event Thursday afternoon supposedly because of a severe migraine. He was set to speak during the event.

Reporters already saw him in the hotel hallway outside the ballroom where the event was being held. But after speaking with his assistant, he inexplicably turned back and left the venue.

Duterte explained that he was already feeling ill even before reaching the hallway. At the hallway, his headache grew stronger, giving him the feeling that he wanted to puke.

Duterte admitted he vomited when he got to his hotel room. He rested for a while then was brought to the hospital for some tests. He ended up staying overnight, missing his original flight to Davao City.

Duterte’s staff had told media that he was able to fly back to Davao City that night. Duterte clarified that he told his staff to say this because he “didn’t want media going into his hospital room.”

The headache, he said, was likely due to the fact that he forgot to take the maintenance medication for his spinal problems. Compounded by back-to-back events and the heat, his resistance was weak.

The doctors also found that he had acute bronchitis or chest cold.

At the Thursday event, after Duterte was seen walking out of the venue, media were initially told that he had gone to the comfort room. But after a few minutes, his running mate, Senator Alan Peter Cayetano, told media that Duterte had a migraine and had gone up to his hotel room to rest. Cayetano spoke during the forum in Duterte’s stead.

That evening, rumors about a mild stroke circulated. Duterte’s executive assistant Bong Go had told Rappler he had his blood pressure taken.

Duterte, on Friday, told media that he would not accept the challenge of Manuel “Mar” Roxas II to reveal his medical records.

The presidential candidate, now 70 years old, maintained he has always been transparent about his health.

In public speeches, he has admitted having spinal problems due to a motorcycle accident years back. He has also spoken of his Barret’s esophagus, a disease involving the tissue in the esophagus.

He also admitted having Buerger’s disease, a condition that causes constriction of the blood vessels due to nicotine.

Sources close to him say he has suffered from severe migraine before and is particularly weakened by heat and long hours under the sun. – Rappler.com