Facebook Twitter Copy URL
Copied
Being 'nationalistic/did not leave the country' is least mentioned as an important consideration in choosing the next Philippine president, based on the poll conducted by Pulse Asia

MANILA, Philippines – Twenty-eight percent of Filipino voters are supporting a presidential candidate based on his or her “untarnished reputation,” according to the latest Pulse Asia Research, Incorporated survey released on Friday, February 19.

“For a little over one (1) in every four (4) Filipinos (28%), the most important reason why they are supporting a particular presidential candidate is because of said candidate’s having an untarnished reputation or a reputation for not being corrupt,” Pulse Asia president Ronald Holmes said in a statement.

In the Pulso ng Bayan January 2016 Survey, conducted from January 24 to 28, 1,800 registered voters nationwide were provided a list of possible considerations that they may have in choosing a presidential candidate.

They were asked, “Sa mga kumakandidato para sa pagka-presidente sa 2016, alin sa mga sumusunod and pinaka-importanteng dahilan sa inyong pagboto sa isang kandidato? (Among the presidential candidates for 2016, which of the following is the most important reason in voting for a candidate?)”

The survey showed that next to “untarnished image,” the second most mentioned reason for voting for a presidential candidate is having a clear program or platform or action (14%),  and extensive experience in governance (12%).

It also showed that 9% of Filipinos cited knowledge in government management as an important factor, while 6% cited being “god-loving/religious” and helpful as important considerations.

Being “nationalistic/did not leave the country” was least mentioned as the most important consideration in choosing a candidate (0.4%). This particular consideration applied to Senator Grace Poe, who is leading other contenders in two polls, even as she faces disqualification cases over citizenship and residency questions. Two percent of the respondents cited “endorsement of a respected person” as their most important consideration. Administration standard-bearer Manuel Roxas II is the anointed candidate of President Benigno Aquino III.

Among the presidential candidates, only Binay is hounded by corruption allegations which he had repeatedly denied.

Higher workers’ pay and illegal drugs were cited as the most urgent concerns Filipinos want their new leader to address, at 38% and 36%, respectively. The respondents were asked to choose their top 3 concerns from a provided list.

This was followed by controlling inflation and fighting corruption, both at 30%; reducing poverty (29%); creating more jobs (26%); fighting criminality (24%); and enforcing the rule of law (20%).

Holmes said that one in 10 Filipinos, want their presidential bet to immediately address, upon assuming office, the following issues: promoting peace (12%), curbing the spread of illegal gambling (11%), protecting the environment (10%), defending national territorial integrity (8%), and preparing for disasters and calamities (8%).

The least cited urgent national concerns that the new leader should address are protecting the welfare of overseas Filipino workers (7%), quick response to the needs of those affected by calamities (6%), and preparing to successfully deal with terrorism (4%). 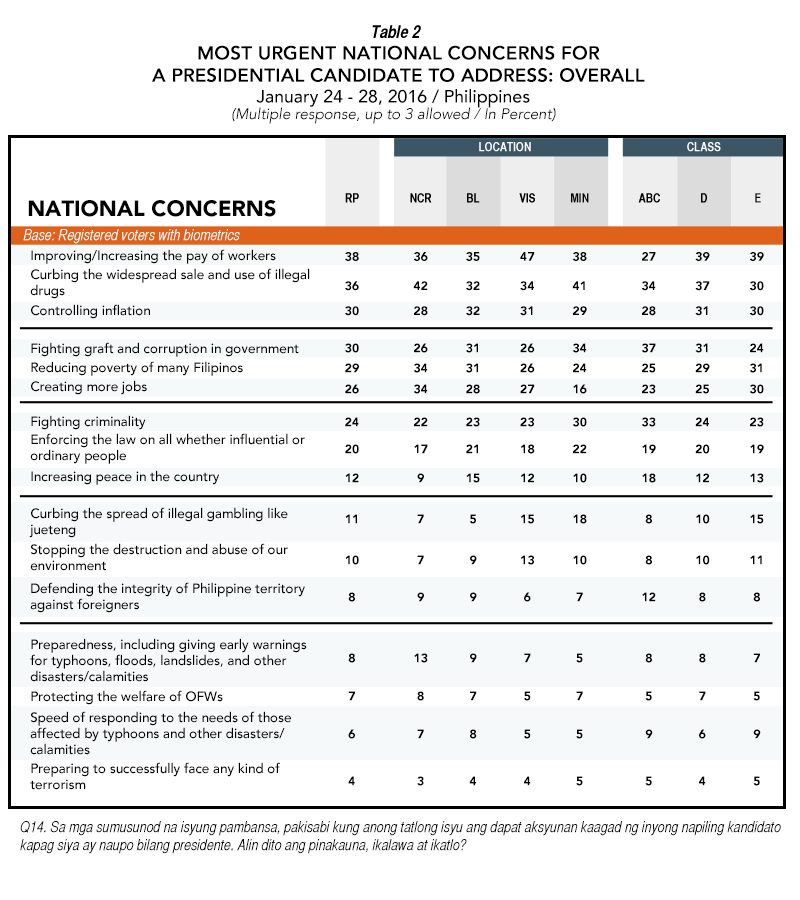 In terms of voters in different geographical locations, Holmes bared the following findings:

During the survey period, among the major issues were the oral arguments before the Supreme Court on Poe’s cases, the conclusion of the Senate probe into corruption allegations against Binay, the re-opening of the Senate inquiry into the Mamasapano clash, and the presidential veto on the proposed hike in the Social Security Systems pension. – Rappler.com