Duterte, Cayetano to require facility for poor in all hospitals 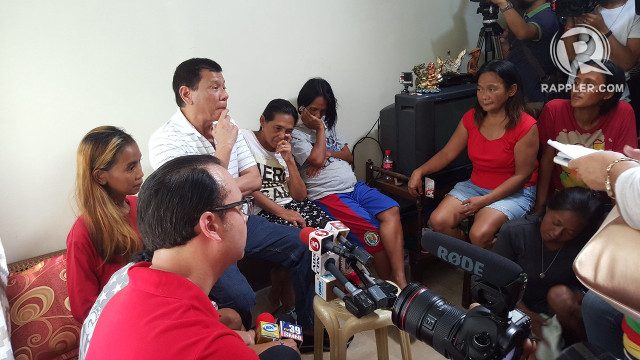 Facebook Twitter Copy URL
Copied
The tandem proposes that all hospitals should provide a certain number of free patients' beds and health services for the poor, with government footing the bill

MANILA, Philippines – If elected, the tandem of Rodrigo Duterte and Alan Peter Cayetano will require all hospitals in the country to have a facility for treating very poor patients, with the government footing the bill.

Duterte said this during a dialogue with urban poor women in Pasay City, accompanied by Cayetano on Wednesday, February 24.

(Hospitals need to put 10 free beds and then you go in. Just tell the doctor what your aliment is, “Tell me what I am sick of as long as the check-up is free.”)

Yesterday: #Duterte tells urban poor women in Pasay about his health program for the poor if elected. #PHVote pic.twitter.com/iBV6u1gmtc

Later that day, Duterte elaborated: “I will mandate that there should be a law, irrespective of whether you are a 5-star, 4-star, 1-star hospital, you must provide a facility for the indigents. Not really indigents because I will pay. When a person enters, you need to help them, cure them, operate on them. I will pay.”

The facility, he said, would take the form of a room or area where a certain number of patients’ beds and the corresponding health services for the patient, will be paid for by the government.

(Cure them, give them medicine, I will pay. The government has a lot of money so I will use it to pay.)

The proposal is the latest to be added to their platform. Read their entire platform here.

‘The money is there’

The Duterte-Cayetano tandem said the government has enough money to pay for this health program.

“First of all, the money is there. The P50 billion a year which we want audited from Sin Taxes, because they promised us senators and congressmen primary health, mobile clinics, mobile X-ray. They promised us regional and provincial hospitals. Number two, PhilHealth (Philippine Health Insurance Corporation) has so much reserves, hundreds of billions,” said Cayetano.

Duterte adds to platform: Mandatory health facilities for the poor in all hospitals in PH paid for by gov't. #PHVote pic.twitter.com/B8CU65sVJD

In 2011 for instance, Senator Franklin Drilon questioned why the agency’s reserve fund at the time was 3 times the level required by law.

As for sin tax, the government collected P120 billion by the end of 2014, according to a Philippine Star report quoting the Department of Finance.

The government estimated that revenue from sin tax would amount to P42.9 billion in 2015.

According to the Sin Tax law, revenues generated should go to programs promoting alternative livelihood for tobacco farmers and workers, universal health care under PhilHealth, and “medical assistance and health enhancement facilities programs” to be determined by the Department of Health.

In his proclamation rally, Duterte said health services will be his 3rd top budget priority if elected president. The first two are agriculture and education.

Myrla Magno, a young mother 5 months pregnant when she listened to Duterte in Pasay City, said she appreciates the presidential candidate’s proposal.

[What he said was good, giving the poor assistance in the hospital. He is not just for the rich, he is also for the poor.]

Unsurprisingly, she liked best the idea of free birthing services for the poor.

During the dialogue, Duterte also explained Davao City’s program of paying for the tubal ligation of poor women.

He has said in previous statements that, if elected, he will “insist on family planning” as a poverty-alleviating measure. – Rappler.com