The results of Pulse Asia Research’s February 2016 Pulso ng Bayan Survey,  conducted among 1,800 registered voters from February 15 to 20, showed Poe with 26% voter preference and Binay with 25%.

Administration standard-bearer Manuel “Mar” Roxas II and Davao City Mayor Rodrigo Duterte are not far behind, both with 21% support of registered voters.

In a race as tight as this coming presidential election, the favor of this undecided segment is crucial. The nationwide survey has a ± 2% error margin at the 95% confidence level.

Among the presidential candidates, Poe experienced the biggest drop in voters’ ratings – 4 percentage points less than in January – while Santiago’s rating dropped by 1 percentage point. 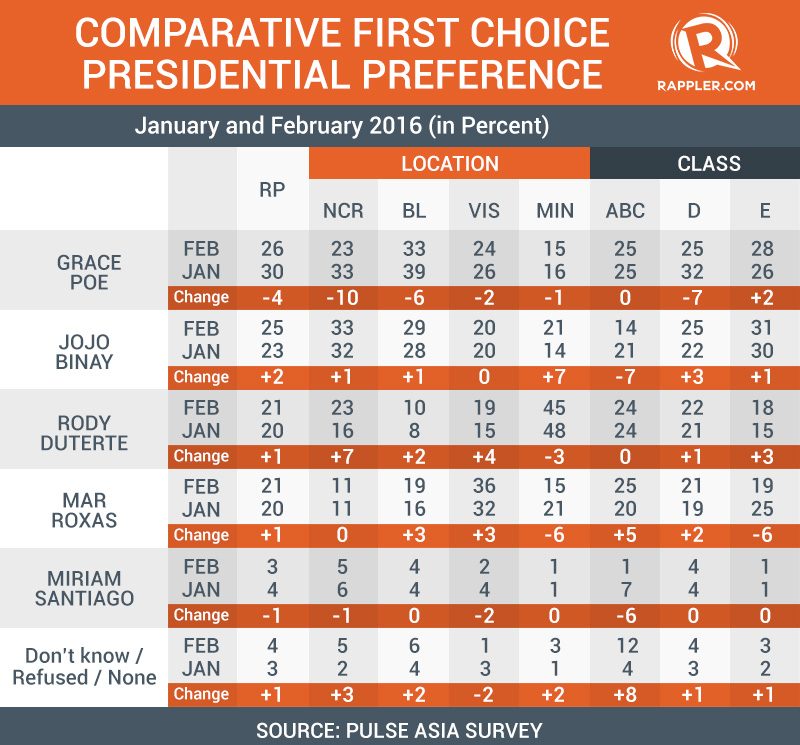 Based on the survey results, each of the top 4 presidential candidates leads in a specific geographical location.

In Metro Manila, the leading presidential bet is  Binay (33%), followed by Poe, and Duterte, both at 23%.

In Mindanao, Duterte leads with 45% while Binay is a distant second at 21%, though this is a 7 percentage-point increase from January. Roxas experienced a 6-percentage point drop in Mindanao, or to 15% from 21% in January.

Pulse Asia said subnational estimates for the geographic areas covered in the survey have the following error margins at 95% confidence level: ± 6% for Metro Manila, ± 3% for the rest of Luzon and ± 5% for each of Visayas and Mindanao.

Among socio-economic classes, voters in the well-off Class ABC favor Poe and Roxas, both at 25%, and Duterte (24%).

In Class D, the primary choice are Poe and Binay, both at 25%, followed by Duterte and Roxas at 22% and 21%, respectively.

Those in the poorest Class E are most inclined to vote for either Binay (31%) or Poe (28%). Roxas’ voter support in this class dropped by 6 percentage points, while the other 3 contenders – Poe, Binay, and Duterte, increased by 1 to 3 percentage points.

“During the period January to February 2016, levels of support for the presidential bids of these candidates remain generally constant – both at the national level and across geographic areas and socio-economic classes.The only significant movement at this time is the decline in the level of support enjoyed by Senator Poe in the most numerous Class D (-7 percentage points),” said Pulse Asia president Ronald Holmes.

During the survey period, among the major issues were oral arguments at the Supreme Court on the disqualification case against Poe, the controversial statement of Sarangani Representative Manny Pacquiao on same sex unions, and the Poe-led Senate panel report recommending the investigation of transportation officials led by Secretary Joseph Emilio Abaya on the MRT3.

The Binay camp attributed the Vice President’s current standing in the polls to his focused ground campaign.

(Work, work, and work. This does not only apply to the Vice President’s sorties around the provinces but also in his fight against poverty.)

The Poe camp thanked its supporters for keeping the senator in the top spot, and expressed confidence that more people would rally behind her as she steps up her campaign.

“Despite all the left-handed attacks against the person of Senator Poe, the Filipino voters continue to stand behind her. Their steadfast support will serve as inspiration for Senator Poe to intensify her campaign,” said Poe’s spokesman, Valenzuela City Mayor Rex Gatchalian.

Reacting to the latest survey results, Roxas’ spokesman, Akbayan Representative Ibarra Gutierrez, said, “What is clear from the latest Pulse survey is that this is still a tied race.”

“Mar’s numbers have gone up slightly, and we are grateful to our supporters who worked hard to make this possible, but we are determined to make the most of the two months left in the campaign,” Gutierrez said.

Duterte’s spokesman, Peter Laviña, said the survey results are not reflective of what the campaign team is experiencing on the ground.

“The survey results do not reflect what we believe are the real sentiments of the Filipinos. We have seen our numbers steadily advancing overall. But we have also seen where we are weak and need to catch up, as well as recognize where we are making great headways,” Laviña said.

“The elections are still a good two months away and we have plenty of time to move up,” he added. – Rappler.com