Facebook Twitter Copy URL
Copied
Here's how you can join the online conversation and make your voice heard during the second presidential debate in Cebu on Sunday, March 20

MANILA, Philippines – Rappler is again providing comprehensive coverage of the 2016 presidential debate series, and we are inviting you, our readers, to join us in a critical and meaningful discussion. Who is the leader you want?

The second presidential debate is set for Sunday, March 20, at the University of the Philippines (UP) Cebu, with 4 presidential candidates facing off:

The only candidate who won’t be attending is Senator Miriam Defensor Santiago, who earlier announced she would skip the debate to participate in a clinical trial for an anti-cancer pill.

In an opinion piece for Rappler, analysts Julio Teehankee and Mark Thompson noted that the second debate is “crucial for all 4 major candidates to differentiate themselves from one another and take the lead in this close presidential race, the tightest since 2004 or even, given the large number of viable candidates, since 1992.”

Also crucial – the participation of the electorate. Scrutinize the candidates’ plans and promises, and tell us what you think.

Similar to the first debate in Cagayan de Oro City last February 21, you can weigh in through our live blog’s mood meter. Click either Happy, Sad, Angry, Don’t Care, Inspired, Afraid, Amused, or Annoyed for each individual post on the live blog. The link for our live blog will be announced on our social media accounts on debate day.

Also on our website, vote on the poll which we will be releasing for every round of the debate. Which candidate do you think won a particular round? In the previous face-off, Duterte got the most votes for all rounds – 1, 2, and 3. Will he sweep the second debate, too, or will social media users pick the other candidates?

On Facebook and on Twitter, share your thoughts on the debate using the hashtag #PHVote, plus the hashtag for the candidate you’re referring to: #PHVoteBinay, #PHVoteDuterte, #PHVotePoe, #PHVoteRoxas, or #PHVoteSantiago (yes, she won’t be around, but her supporters may be joining in on the online action).

How did your candidate perform? How did his or her rivals fare? Did they actually answer the questions? Are their plans feasible, or are they making empty promises? What are your own ideas or proposals? Post your comments online. 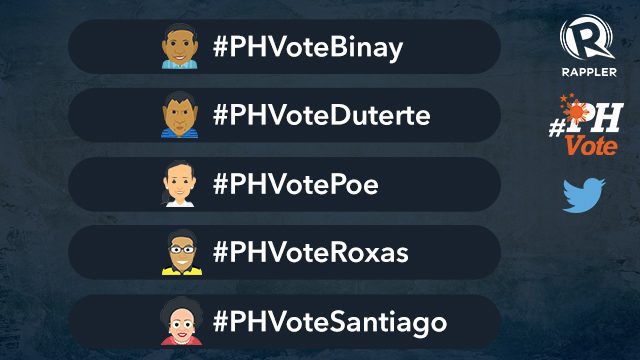 Through real-time, in-depth monitoring via Reach, Senti, and Radian 6, plus data from Facebook and Twitter, Rappler will map out the online conversation on the debate. Our aim – provide a clear picture not just of how social media users reacted to the candidates’ pronouncements, but also show underlying patterns and trends. Be part of the online conversation on Sunday as Filipinos scrutinize the leader they want. – Rappler.com