Southern Leyte governor from LP, but ‘can’t say no’ to Duterte

Mar 22, 2016 5:47 PM PHT
Pia Ranada
Facebook Twitter Copy URL
Copied
Not supporting Duterte would be a betrayal of his province and his people, says Governor Roger Mercado, who belongs to the Liberal Party 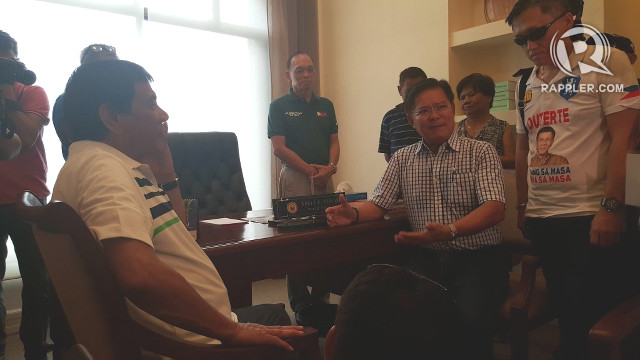 MAASIN CITY, Philippines – Southern Leyte Governor Roger Mercado, a member of the Liberal Party (LP), said he can’t say no to the presidential bid of his “fellow Maasinhon” Rodrigo Duterte.

“Here is a person who claims and is very proud to claim that he was born in Maasin, Southern Leyte. Who are we to say no to him?” said Mercado in front of Duterte during the latter’s visit to Maasin on Tuesday, March 22.

Mercado added: “Mayor, we are proud of you as a Southern Leyteño. We will pray hard that you will become the president of this country.”

A few minutes earlier, Mercado had congratulated Duterte for gaining the top spot in a March 8 to 13 Pulse Asia survey, a spot Duterte shares with Senator Grace Poe.

The governor also told everyone in the room that though he is an LP member, “we cannot disassociate ourselves in terms of culture, blood, and relationship.”

Despite being prodded by reporters, Mercado did not categorically say he is endorsing Duterte.

But he acknowledged the difficulty of his position, belonging to the LP and thus duty-bound to promote the candidacy of its standard-bearer Manuel “Mar” Roxas II.

But he said he won’t be able to stop fellow Southern Leyteños who choose to vote for Duterte instead.

“As a party man, I am Liberal Party so we have party discipline. But we give freedom [to the people]…I cannot say no because I will be a traitor to my own province, city, and people if I hold them,” he told reporters.

In response to Mercado’s declaration of support, Duterte said he only visited the LP governor “to pay respects, no impositions.”

“Ako, kung may sobra, akin na lang (If there are extra votes, those can be mine),” he joked.

All he asks for from Southern Leyte: “Huwag akong dayain. Kung talo ako, talo (That I won’t be cheated. If I lose, I really lose).”

After his courtesy call on Mercado, Duterte spoke at a public gathering attended by thousands of Maasin residents, including his old classmates and his relatives on his mother’s side.

Duterte was born in Maasin, Southern Leyte on March 28, 1945, and lived there until he was around 11 years old. He and his family then moved to Davao City.

Members of the Roa clan, of which Duterte’s mother Soledad is a member, still live in Maasin. – Rappler.com