The Leader I Want: Dionisio Santiago’s to-fix list for 2016

Apr 14, 2016 8:23 PM PHT
Facebook Twitter Copy URL
Copied
Rappler #PHVote's 'The Leader I Want' series looks at Dionisio Santiago's stand on key issues the next batch of senators will have to address 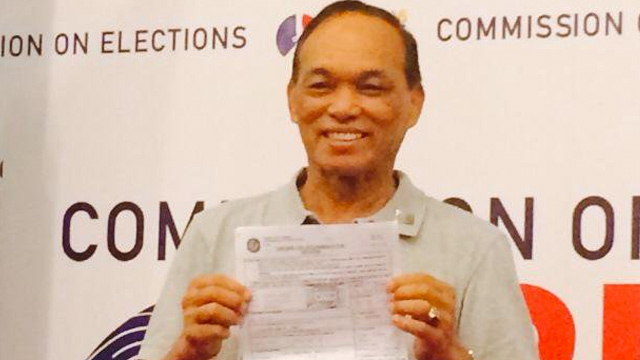 MANILA, Philippines – Dionisio Santiago is a former chief of staff of the Armed Forces of the Philippines.

He retired in 2010, but decided to run for a Senate seat because he has the expertise to address one of the biggest problems in the country: illegal drugs.

As former head of the Philippine Drug Enforcement Agency, Santiago has a platform that focuses on civil security and defense, anti-drugs program, and national development.

As part of Rappler #PHvote’s “The Leader I Want” series, we look at Santiago’s stand on key issues that the next batch of senators will have to address.

On the issue of politicians involved in illegal drug trade, Dionisio said a lifestyle check should be done among the employees of PDEA, according to a Philippine Star article.

“There is something wrong going on with PDEA. A lifestyle check should be done among PDEA personnel. The cleansing should be a continuing process…. Kailangan tutukan ang investigation ng mga personnel na may kaso hanggang sa civil service (We must closely watch the investigation of personnel who have cases all the way up to the Civil Service Commission),” he said in the article.

In a special interview with the Manila Times, he said that illegal drug trade in the government is rampant and that he sent a list of government officials who are involved in the trade to the Defense Secretary Voltaire Gazmin in 2010.

While he supports Rodrigo Duterte’s, Santiago thinks that it is impossible to solve crime and drug issues in 3 to 6 months, as promised by the presidential candidates. (READ: Duterte vows peace in 3-6 months if elected president)

In an interview with News5, he said: “You cannot totally eradicate it (crime). At least p’wede mong pababain. I think pag-assume pa lang ni Mayor Duterte bababa na ‘yan eh, dahil matatakot ‘yung ibang mga talagang…identified naman ‘yung iba. And maybe there are so many ways by which you can stop them from continuing with their trade.” (You can at least lessen it. I think the number of crimes will decrease shortly after Mayor Duterte assumes [the presidency] because [drug lords] will be scared, some of them are already identified.)

Santiago said in an ABS-CBN News article that, once elected, he would push for amendments to the Comprehensive Dangerous Drugs Act. He also said he would propose laws that would change the anti-drug enforcement campaign in the country.

To punish criminals, especially drug lords, Santiago said he is for restoration of the death penalty.

Santiago thinks the procurement law should be reviewed first before the government continues the modernization of the Armed Forces of the Philippines.

Santiago is against labor contractualization. He is also pushing for the increase in social security pension, which President Benigno Aquino III recently vetoed. An ABS-CBN article quoted Santiago as saying, “There should have been a compromise if the proposed P2,000 increase was too high.”

Santiago said in an interview with News5 that the law should be implemented more strictly, especially when it comes to buying cars.

(How will you stop that? Maybe follow Singapore’s legislation, make it difficult to buy cars. In Singapore, you cannot just buy cars. Even military officials there take public transportation such as MRT and buses.)

He also slammed some traffic enforcers who apparently do not follow the law they are implementing.

Santiago is against the proposed Bangsamoro Basic Law, saying that it makes the country more divided, instead of unifying it, according to a Philippine Star article. – with a report from Stephanie Ilacad/Rappler.com

Dionisio Santiago is among the senatorial candidates who will participate in Rappler’s #TheLeaderIWant Senatorial Debates at the University of the Philippines School of Economics Auditorium in Quezon City on Friday, April 15, from 3 pm to 5:30 pm.