MANILA, Philippines – Risa Hontiveros was again deemed the senatorial candidate who did best in the second round of Rappler’s 2nd Senatorial Debate on Friday, April 15.

Support for her surged since the first round, which netizens also say she won. For the second round, Hontiveros got 76% of the votes, when in the previous round, she was voted by 53% of those who took the poll.

During the second round, all candidates were asked a question by Rappler CEO Maria Ressa. Other candidates were also given a chance to rebutt or respond to the answer of the candidate on the hot seat. 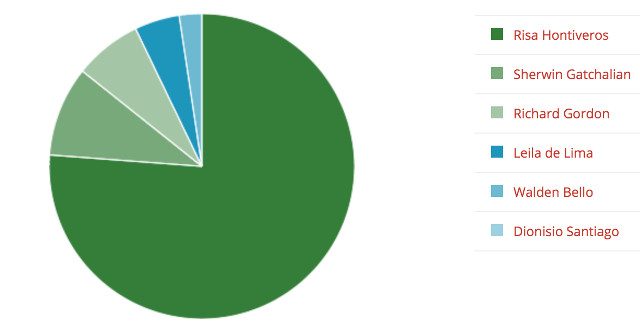 Netizens voted “Happy” in Rappler’s live blog and analysis page when Hontiveros began talking about what the Philippines still needs to do go achieve its Millenium Development Goals when it comes to reducing maternal mortality. The Philippines fell short of its goal.

Netizens also felt Hontiveros did well in responding to Gatchalian’s question on whether or not the kumadrona or traditional midwives should be banned because of the informal methods they use.

But Hontiveros said these midwives can be integreated into more formal health care services under the Department of Health.

Hontiveros pointed out the need to give climate change legislation a push. She said more groups and local governments should be told about the P1-billion People’s Survival Fund, a fund created by a law to provide communities with resources to address climate change impacts. – Rappler.com