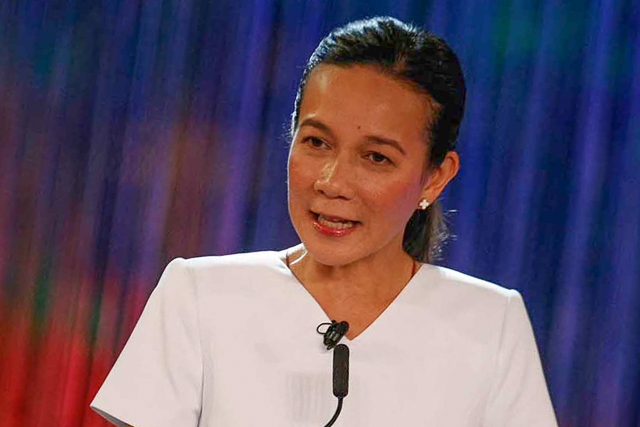 MANILA, Philippines – All 5 presidential candidates gathered for the third and final presidential debate Sunday, April 24, at the University of Pangasinan – PHINMA education network.

Rappler editors named Grace Poe the winner of the first round, a town hall-style question-and-answer portion where candidates fielded questions from affected men and women on various issues.

She appeared most prepared and was able to make best use of the limited time to answer. She gave specific plans and suggestions on policies and issues.

On the issue of the West Philippine Sea, candidates were asked what they could do to help those living in affected areas to live peacefully and alleviate the tense situation in the area.

In general, candidates agreed that diplomacy would be critical towards navigating the problem. Poe and Roxas addressed the issue two ways: concerning the individual and the nation. Both cited specific measures to assist fishermen caught in the war – provide radios (Poe), improve the Navy (Poe), extend government assistance of 4 Ps, Philhealth (Roxas) but not at the expense of giving up what we own (Roxas).

(First, they should be given radios, we can order this. Second, we should provide radios for our fishermen. The West Philippine Sea is not a personal aquarium of the Chinese. You know, they are like school bullies.)

Roxas also spoke about being a commander-in-chief. This is a crucial point since this is a security dispute, too. He noted the importance of not being too rash and being very careful with orders given that people’s lives will be on the line.

Roxas’ statement was prompted by Duterte’s remarks about going to the contested islands to lead troops against China. Duterte did not provide any specific measures to address the concerns of the fishermen.

On the traffic issue, Roxas and Binay listed different approaches that a president might be able to take on in his level. What to do with DOTC? Merge it with DPWH (public works and highways) under one leader, says Roxas. This would make projects more cohesive and aligned.

Binay said it was important to break apart DOTC, one into a department of transportation, another into a department of communications. These are public statements that they can be held accountable to, and it concerns national departments. It shows they have studied this issue – both having been in the executive roles.

Binay talked with credibility as far as traffic is concerned because he’s been Makati mayor and headed MMDA.

Candidates generally agreed that improving the mass transit systems would be critical to solving the problem, though Roxas pointed out that many of the plans stated were actually already in the works – later hit by other candidates who noted the too-long lead time, which failed to yield results for citizens.

Poe also noted that she would appoint a traffic czar whose job would be to monitor these traffic projects. Santiago spoke about the need for a new capital city near Clark, which would help to decongest Metro Manila. Duterte emphasized that there would be no magic solution to solve the problem – constant incremental improvements would be important.

She added, “Ang mga tao ay hindi makina. Hindi sila basta-basta pinagtratrabaho tapos itatapon na lang kapag hindi na kailangan.” (People are not machines. You can’t just use them and throw them away when you don’t need them anymore.)

Duterte said that contractualization will end “immediately” after he assumes the presidency.

He would do this by convening lawmakers like those from the dominant Liberal Party and telling them to pass a law that would end contractualization. “I will call the Liberal Party congressmen, you pass this bill immediately. I need it, first week of my administration. Ganoong lang, gawin ninyo (That’s it, just do it),” he said.

On the situation of overseas Filipino workers, candidates proposed various suggestions to alleviate their challenges.

Poe said they were truly modern heroes, and that they deserved portable Phil Health cards they could use internationally, as well as a 24-hour hotline to field their concerns. Along with this, it would be important to create jobs for returning OFWs. The “red carpet treatment,” she said, was in order for them – including faster renewal procedures for seamen, cancellation of terminal fees, and leaving their possessions in balikbayan boxes alone.

Binay spoke about a pension plan and legal assistance for OFWs. Santiago and Duterte emphasized the importance of the role of a consul general to assist and protect OFWs.

Roxas emphasized the significance of continuing economic growth that was already in place, as this would help returning OFWs.

Duterte spoke about committing PAGCOR funds as a “trust fund” to be used for Filipinos’ medical expenses. He said he would require hospitals to reserve a number of beds for certain citizens. He pointed to his experience heading up Davao City.

Poe said she would champion zero billing for the poorest people and would also push for improvement of hospitals.

Roxas said that proposals from his opponents were actually already in place, such as the PhilHealth trust fund proposed by Duterte and the zero billing proposal from Poe.

Binay rebutted this by saying that if this were true, there would be no such complaints. Roxas named figures that were included in spending for this purpose, again rebutted by Duterte. Roxas said he would send him a list of Davaoeños who benefited from PhilHealth. Roxas insisted he could show results in Davao City and hit Duterte for insisting otherwise.

Duterte challenged him and asked why Roxas was lagging in surveys, but Roxas insisted that he would prevail.

This is a Roxas handicap: he knows issues, but when he starts citing government projects, he crumbles because his data doesn’t reflect reality.

Santiago said she opposed privatization of hospitals as well as the requirement to present a letter of recommendation from a politican to have funds released.

On the issue of peace in Mindanao, candidates were asked if peace was still possible in the region. A woman said that she was still living in an evacuation center and asked candidates how they would address the conflict in Mindanao.

Santiago said it was important to dismantle private armies stemming from corrupt officials. A tweaking of the justice system was in order, she said.

Duterte said historical injustices should be corrected, something he has mentioned in the past. Discussions with the New People’s Army, more peace talks and negotiations, he said, were very important.

Binay brought up his previous record and experience. He said it was key to address poverty in the region, a root cause of conflict in the area and something he would target as president.

Poe addressed the concerns of the woman who asked the question, saying she understood her concerns. All-out war against terrorists, she said, should go hand in hand with all-out developments in the region, particularly for medical supplies. Bilateral talks to address terrorism would be continued.

It was only Poe who cited the terror threat, which was not mentioned by other candidates in relation to security problems in Mindanao.

Poe stressed government should not hold negotiations with terrorists. The terror threat is real in Mindanao.

The event was organized by the Commission of Elections (Comelec) in partnership with ABS-CBN and Manila Bulletin.