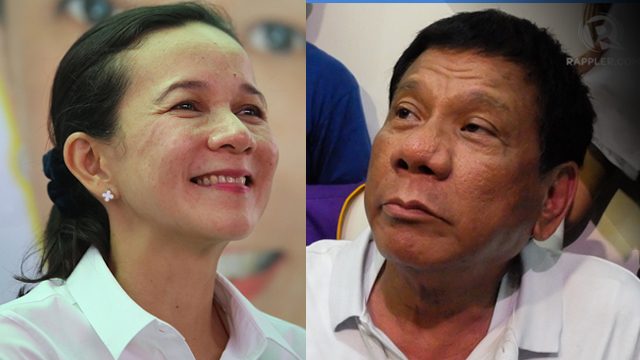 LEGAZPI CITY – At an ambush interview at the Legazpi City Domestic Airport on Thursday, April 28, independent presidential candidate Grace Poe urged voters to choose a candidate who can fulfill the pledges they’ve made during the campaign period.

“The Philippines is in need of a President who is true to his promises with a word of honor. So this coming election, vote for the candidate who can fulfil pledges made in the campaign,” Poe said.

Poe’s pronouncement came after she was asked to comment on Rodrigo Duterte’s sincerity regarding his bank account.

Senator Antonio Trillanes earlier accused Duterte of having P211 million in undeclared wealth. Trillanes, who is running for vice president, claimed Duterte did not declare this bank account in his Statement of Assets, Liabilities, and Net Worth (SALN). If the bank account exists, Duterte can be impeached if he becomes president.

“The issue here is we want a leader with word of honor,” she reiterated. (READ: Poe to Duterte: Why blame me? Disprove bank account)

Poe also defended Trillianes against critics from Duterte’s camp, saying his agenda is not malicious.