Facebook Twitter Copy URL
Copied
Since I started covering Vice President Jejomar Binay in July 2015, I discovered a great deal about him that headlines fail to show

Covering the candidacy of Vice President Jejomar Binay is my baptism of fire.

Several months ago, my editor told me that I would be assigned to follow Binay on the campaign trail.

I was a fresh graduate – Rappler was my first job – and I entered the industry at a time when the controversies about Binay and his family were at their peak.

His son, Makati mayor Junjun Binay (now dismissed from office) just left city hall after being served a second suspension order. On the same day, the elder Binay launched the United Nationalist Alliance (UNA) – the opening salvo of his bid for the presidency.

Since I started covering Binay in July 2015, I discovered a great deal about him that headlines fail to show.

He is not just the Vice President, former Makati mayor or ex-MMDA chief; he is also a husband, a father, and a lolo (grandfather) to 13 grandchildren. (READ: 9 things to know about Jejomar Binay)

I have compiled  some of my most memorable first-hand experiences while covering Binay, in the hopes that readers would know more about this man who is pursuing his childhood dream to become the leader of the country.

1. He pokes fun at his own dark skin.

Binay’s critics used to call him “nognog,” a derogatory Filipino term taken from sunog (burnt). The term was popularized by Filipino cartoonist L.S. Martinez who created the Nognog comic series on the dark, short, curly-haired, and stubby-nosed character in the 1970s. (It was turned into a movie starring Niño Muhlach in 1980).

The Vice President has since embraced the term, using it as a campaign strategy to make him more appealing to the masses.

He often jokes about being “nognog,” too. After an ambush interview in Caloocan City, Binay removed his pedometer and showed off his tan line to us reporters.

“Ito na pala ang magiging issue (This will be the issue now),” Binay quipped as he obliged one cameraman’s request for him to raise his wrist higher.

2. He loves to crack jokes.

The Vice President uses his humor to get his point across to his audience at campaign sorties.  (READ: An anatomy of Jejomar Binay’s campaign speeches)

He has jokes about senior citizens, his plan to expand the Pantawid Pamilyang Pilipino Program, and even about the typical Filipino looking like a “nognog” like him.

Whenever a local politician endorses him onstage, the Vice President would thank his ally in his speech by opening it with this classic line: “Siya ay isang CSB – Certified Sipsip kay Binay!” Like any typical candidate, Binay hands out t-shirts, ballers, and even arm sleeves marked with his name during his sorties and motorcades.

Unlike some, he gives away “Binay for President 2016” candies.

During the first few weeks of the campaign, the candies were tamarind-flavored and wrapped in orange, UNA’s color during the 2010 and 2013 elections.

Later on, Binay started handing out mint-flavored candies wrapped in blue, the color of his party for the 2016 elections.

VP Binay when asked about his state of health for the campaign. He says he's "in pink of health" #PHvote pic.twitter.com/hWzcFTyF92

A day after Binay officially launched his presidential bid, he told reporters in Laguna that he is in the “pink of health” to run his campaign. He made the statement to respond to questions about his physical fitness to lead the country.

To prove his point, the 73-year-old jumped several times. He then shared that his doctor recommended that he play badminton again.

(Badminton is one of the sports I got into before that caused me several injuries. The shuttlecock hit my eye. My knees always swelled. But I’m saying this just to emphasize the fact that I’m really in the pink of health.)

In Gutalac, Zamboanga del Norte, Binay shared that his personal distance running record stands at 10 kilometers, which he could complete in under 44 minutes.

5. Morning exercise and early afternoon siestas are non-negotiables for Binay.

There was a point during the campaign period when embedded journalists following Binay fell ill, myself included. I had to take a sick leave twice due to tonsilitis and fever.

Binay, however, seems indefatigable – his pedometer even registered up to 30,000 steps on some days, according to a source.

A staff member said the Vice President never misses his breathing exercises in the morning. He also sets aside around one to two hours every day to take an early afternoon nap. These help reenergize Binay on the campaign trail.

He also eats a lot of fish, fiber-rich meals, a little rice, and minimum to no sugary foods.

6. He is a doting grandfather. The first 4 Binay children blessed the Vice President with 13 grandchildren – who immediately light up the UNA standard-bearer’s face when their parents bring them to their grandfather’s sorties.

When Binay went onstage during Abby’s proclamation rally in March, he  approached his apos (grandchildren) and showered them with hugs and kisses.

VP Binay hugs and kisses some of his grandchildren on stage pic.twitter.com/u38cfH764u

I then asked Binay in another sortie in Pampanga if his grandchildren call him “grandpa” or “lolo.”

7. He does not mind eating with his hands. And he’ll share his food with you that way, too. 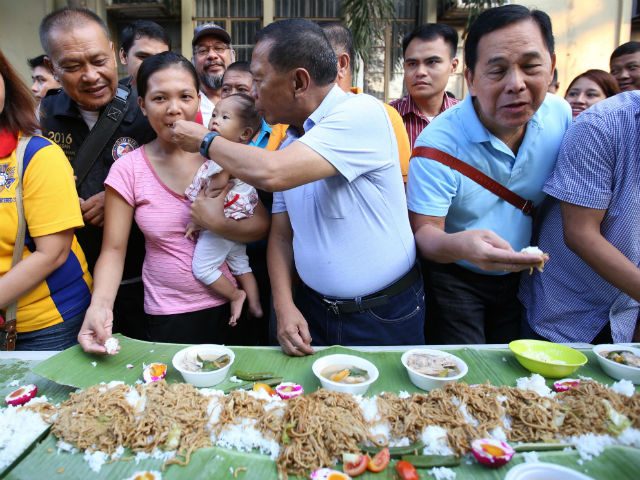 Even before start of the official campaign period, boodle fights have been a staple in Binay’s provincial visits.

He would ditch the utensils and eat the prepared food – sinigang na isda, pancit, rice, salted egg and tomatoes – with his bare hands whenever he can.

The Vice President does not mind sharing either: he would feed the person standing or sitting next to him the same way. 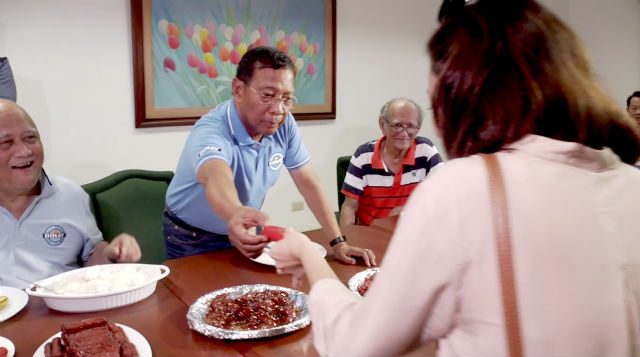 He then proceeded handing out hotdogs the same way to the other reporters in the room.

The Vice President rarely dances during sorties, though he allows celebrities like rapper Gloc-9 and Wynwyn Marquez, the daughter of UNA senatorial bet and Parañaque Councilor Alma Moreno, to perform during his rallies.

But prod him enough and Binay will bust out his dance moves – or his dance move, rather – to the delight of his screaming supporters.

He will stand then bob his shoulders up and down, but only for a few seconds.

In fact, a video of him dancing at a sortie in Alabel town with Moreno and Sarangani Representative Manny Pacquiao went viral online (though netizens focused more on Moreno, not Binay).

9. He holds hands with the people he meets on the campaign trail.

One thing I noticed about Vice President Jejomar Binay is that he holds the hands of the people he meets on the campaign trail – police and military officials, businessmen, politicians, the common folk. Here he is during his arrival in Alabel town, Sarangani on April 19, 2016. #PHVote

Binay’s early life in poverty makes him endearing to the common folk. The Vice President does not hesitate to approach them as he does his rounds across the country.

Debating on national television may not be his strength, but Binay is at his most comfortable whenever he starts light conversations with market stall owners or when he obliges selfie requests from supporters who wait for him inside barangay courts.

“Taong-kalye kasi si Vice President (He is a man of the streets),” UNA spokesperson Mon Ilagan described his boss.

During sorties, I have noticed that the Vice President would always reach out to the person he is with, to hold his or her hands briefly.

He does this with everyone – military and police officials, business executives, a longtime politician, his loyal supporters, and even embedded reporters like me.

10. He considers several seasoned politicians as his most trusted allies, several of whom run his campaign. Binay’s campaign team is a mix of familiar faces. Many of them include longtime allies and trusted friends who also helped steer his victorious 2010 vice presidential bid. (READ: Who are the people behind Team Jejomar Binay?)

The Vice President constantly consults with them, especially on matters involving key decisions on the campaign. But Binay still makes the final call.

“In the end, he is the candidate. His decision is final. In politics, the candidate has to be comfortable with it,” said Tiangco. – Rappler.com

Do you have other personal encounters with Binay you’d like to share? Let us know in the comments section below!