Robredo to Marcos: Don’t use me to woo Duterte voters 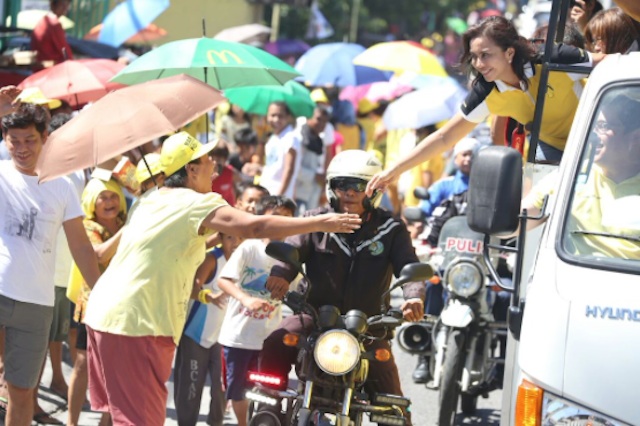 MANILA, Philippines – Administration vice presidential candidate Leni Robredo  on Friday, May 6, urged Senator Ferdinand “Bongbong” Marcos Jr not to use her or the false scenario of a Liberal Party-led power grab to woo voters of Davao City Mayor Rodrigo Duterte.

In an interview with reporters at the Ateneo de Manila University, Robredo said she was “saddened” by Marcos’ allegation that the LP was plotting to wrest the presidency from Davao City Mayor Rodrigo Duterte, if elected and if Robredo wins as vice president.

(It’s disappointing. I think he’s courting Duterte votes. He can court the supporters of Mayor Duterte without lying. It’s disappointing that he has to resort to allegations such as his. Perhaps, he doesn’t know me. That’s not my world. They are the politicians.)

(I’m very new to politics, and the kind of politics that my husband and I started is nothing like that, not like their kind of politics. He should just court [voters] without using me.)

Robredo, a pro-bono lawyer for marginalized sectors, was thrown into the political ring after the death of her husband, former interior secretary Jesse Robredo. She was elected Camarines Sur Third District Representative in 2013.

Marcos has been hitting Robredo since his closest rival to the vice presidency experienced a surge in her voter rating in the latest surveys. Marcos had questioned Robredo’s rise, and claimed this was part of the administration’s alleged mind-conditioning strategy.