Mission #ProtectVPLeni: How the Robredo campaign guards a tight race MANILA, Philippines – There was silence in the room the evening of May 9, Monday, as election results from precincts all over the country started pouring into the transparency server.

Liberal Party (LP) vice presidential candidate Leni Robredo, her daughters, aides, and a handful of key campaign personalities were huddled inside a hotel in Naga City, closely monitoring the partial, unofficial results of the elections.

It was a tense few hours, punctuated only by a joke or two from Robredo’s young campaign staff or a supporter or two on social media.

(A lot of you, even as my children and I were depressed over the initial election results, made us laugh because you’d say you were willing to give up your lovelife just so I could win. Or that you’d be fine with failing your exams just so I could win.)

Between 7 to 9 in evening that day, Robredo’s chief rival, Senator Ferdinand “Bongbong” Marcos Jr surged past her as precincts from his bailiwicks in the northern regions started transmitting voting results.

Kilometers away in Quezon City, the rest of the Robredo campaign team – a motley mix of (former) government workers, civic society champions, and Senate staff – the mood was just as somber.

Robredo supporters online began crunching the numbers – and predicted a surge in the wee hours of the morning.

“I don’t understand what the experts are saying, but I know we’re going to win this,” said another campaign team member, as the senator from Ilocos Norte, the son of the late dictator Ferdinand Marcos, seemed like he was poised to beat the neophyte lawmaker from Naga City.

It would take hours before Robredo finally took the lead at 3 in the morning, as votes from her bailiwicks finally began to transmit.

In Naga, there were cheers and tears. In Quezon City, it was the same – plus someone had the presence of mind to play Robredo’s campaign song, the same that sold her as a candidate who would champion women all over the country.

That initial lead – of a mere 500 votes or so – has slowly grown into a narrow 6-digit advantage over Marcos.

It’s a lead that the Robredo team is working hard to protect. “Of course we’re very vigilant. The first night, none of us slept. Talagang kinakabahan kami (We were really nervous). And even though we took the lead, we know that this will be won with a very slim margin,” Robredo’s newly-minted spokesperson Georgina Hernandez told Rappler in a May 14 interview.

“So hindi kami nagkukumpiyansa, nagbabantay kami at naguusap kami kung papaano ba natin i-prove yung (So we never overly confident. We continue to monitor the vote and talk about how we can prove) vote protection so that the results of the elections will be protected and will have integrity,” added Hernandez who, only a few days ago, was a nameless fixture in Robredo’s many sorties.

A former Department of Social Welfare and Development (DSWD) employee, she has since turned into the face of Camarines Sur representative’s campaign. Many of Robredo’s key campaign members share the same background.

Robredo’s eldest daughter, Aika, herself worked in government, first in the Department of Transportation and Communications (DOTC) and later, the National Disaster Risk Reduction and Management Council (NDRRMC).

The bulk of Robredo’s people on the ground – from the media, political and non-convential clusters of the campaign team – are mostly young, predominantly millennial. A majority of them have never worked in a national campaign until Maria Leonor Gerona Robredo took on the “challenge” of running for the second-highest post in the land.

“I thought we’d finally be able to relax after May 9,” says one campaign aide, while tucking in a huge cup of iced coffee. At the Microtel Hotel in Acropolis, people wearing yellow shirts shuffle in and out of the hotel, around its different conference rooms, and into hotel rooms the campaign team has since fashioned into their post-election day headquarters.

On May 10, hours after Robredo finally cinched a hairline advantage over Marcos, the hotel lobby overcome by the chatter of journalists, sleep-deprived team members, punctuated only random instructions from the more senior members of the campaign.

“We need a team in Eastern Visayas.”

Hernandez explained that while the ruling party already has election lawyers stationed all over the country, the Robredo campaign on May 10 decided to deploy its own team of volunteer lawyers “primarily to go to areas with very low transmission of votes.”

Some of these “lawyers” are either recent law school graduates or bar passers. A handful of them have yet to take their oaths.

Not all the areas the Robredo team closely monitored are necessarily bailiwicks of the LP candidate. For example, there’s Davao del Sur, where president-elect Rodrigo Duterte’s running mate Senator Alan Peter Cayetano won big. Or even Pangasinan where, despite an alliance with the incumbent governor, it was Marcos who trumped Robredo.

But in a hotly-contested race – one that’s likely to be won by a hairline – every transmission, every vote counts.

“’Yung binabantayan talaga yung hindi na tratransmit ng mga boto (They’re really just waiting for the votes that have yet to be transmitted) where we sent 10 teams. We had volunteer lawyers, some of them mga kasama pa sa Saligan (some of them members of Saligan, the NGO Robredo used to be part of). So their role was to go to the provincial canvassing center to find out the reasons for the delay, to determine the corresponding number of votes that have not been transmitted yet and to just basically wait until lumabas (they’re transmitted),” explained Hernandez. 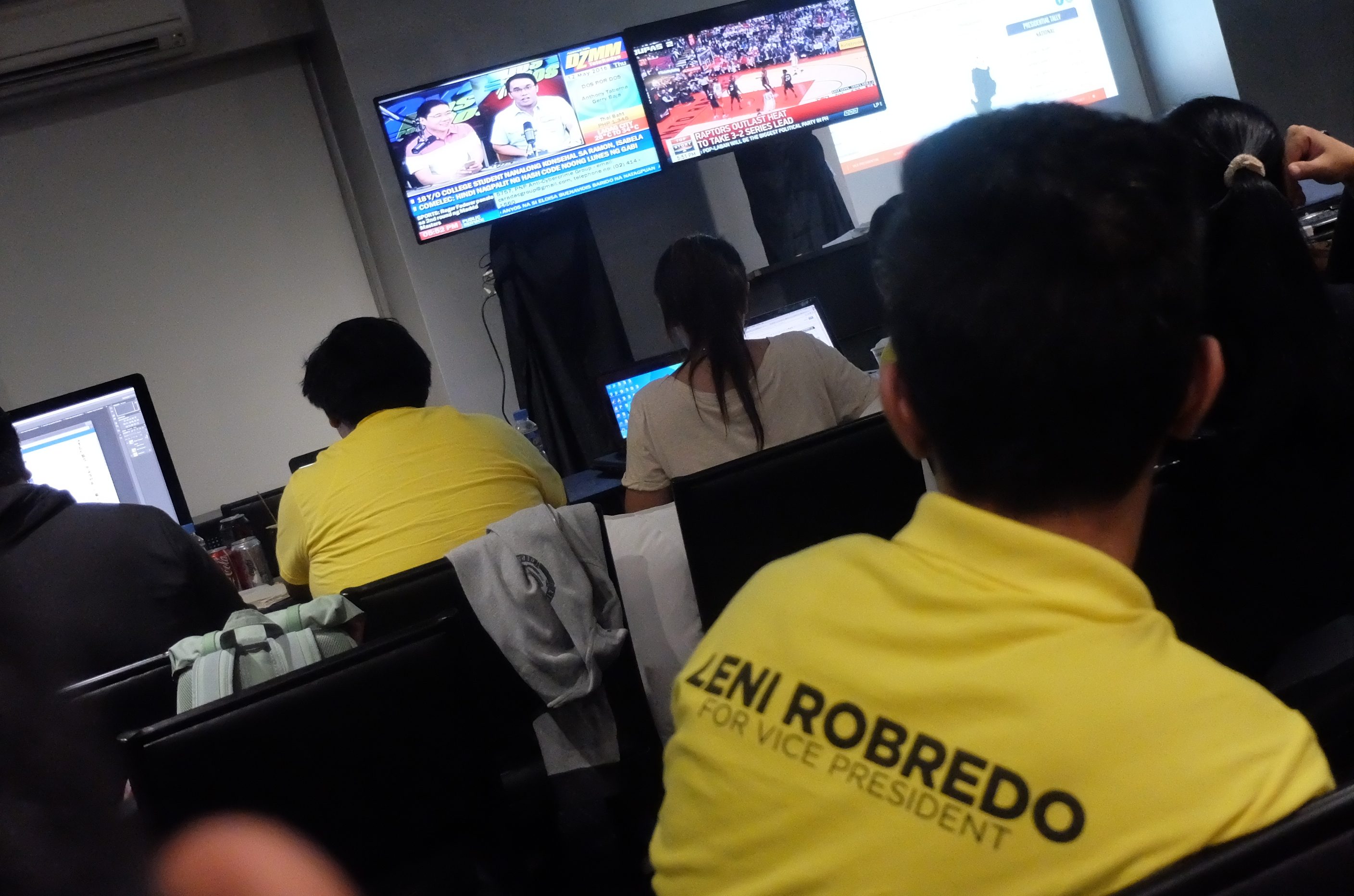 For some members of the Robredo legal team, the job entails taking pictures as each town or city with transmission problems begins canvassing votes.

“Uy (Hey), you’re back. Get ready to visit another province tomorrow,” is what usually greets these young, enthusiastic but tired campaign team members.

Hernandez told Rappler none of the teams have monitored any irregularities – at least not of the suspicious kind. But it’s the other camp that’s now crying foul.

Even before May 9, or just around the time Robredo inched dangerously close to the top of preference polls, there was already talk of cheating, irregularities during overseas absentee voting (OAV), and the LP’s so-called “Plan B.”

The rumors – spread primarily through fake news sites and internet memes on social media – prompted Robredo to call for a rare press conference on May 7, the last day candidates are allowed to campaign.

“Plan B,” according to Marcos, was the ruling party’s plan to allow Duterte to win but make sure Robredo would bag the second-highest post. The LP would then allegedly impeach Duterte, paving the way for another LP official in Malacañang.

Robredo did not take Marcos’ theories lightly. She admonished him for supposedly using her to win over Duterte supporters. Even before the campaign official began, there were several groups who aggressively pushed for a Duterte-Marcos tandem.

Besides, Robredo said, it wasn’t her who had presidential ambitions – it was Marcos.

One of Robredo’s aides was quick to make light of the allegation. “Plan B,” Magno posted on Facebook, actually meant “plan bangs.”

This has been the mood in the Robredo headquarters the past week – a mix of sadness over standard-bearer Mar Roxas’ loss (some of Robredo’s campaign staff also worked closely with Roxas in government), tepid nervousness over their principal’s slim lead, and a sense of humor that just won’t go away despite the lack of sleep.

The past few days, Robredo, Hernandez, and the rest of her campaign team have had to fend off or downplay allegations of cheating. Marcos and his camp questioned how Robredo was able to overtake him, despite leading by over 900,000 votes Monday evening.

Robredo supporters, pundits, and experts, using data from the Commission on Elections (Comelec) transparency server, have argued against Marcos’ allegations by pointing out that the early morning surge can be explained in simple terms: Robredo’s bailiwicks simple transmitted much later than Marcos’. (READ: Election data quash Marcos’ cheating pattern claim)

The Marcos camp later speculated that the insertion of a “new script” into the transparency survey could have altered the count. Both Comelec and the Parish Pastoral Council for Responsible Voting (PPCRV) have allayed these fears, saying the chance was nothing more than a “cosmetic” change to make sure “ñ” didn’t show up as a question mark (?) in the names of certain candidates. (READ: Comelec on change in hash code: ‘No cheating’)

“Definitely sa number of votes, wala (in the number of votes, there’s no effect). But of course we want the general public to trust whatever the results will be and that’s why we do not want to condition the minds of the public that there is some irregularity and there is cheating,” said Hernandez, when asked about the possible effects on Marcos’ allegations on the vice presidential race.

It’s a war that’s now being waged on social media, as the Robredo camp rallies supporters to debunk Marcos’ claims, to cast any cheating doubts aside.

One of the many shirts the Robredo campaign sports is a cheeky allusion to Robredo’s sorry numbers early in the race. “From 1% to vice president,” reads the print on one yellow shirt.

It was a candidacy that supporters acknowledged as difficult and critics dismissed as impossible. Can the neophyte legislator trump another political big wig, as she did in 2013?

But more importantly, will her win – and her term as vice president – survive cheating allegations? – Rappler.com