Proclamation of 12 senators set for May 19 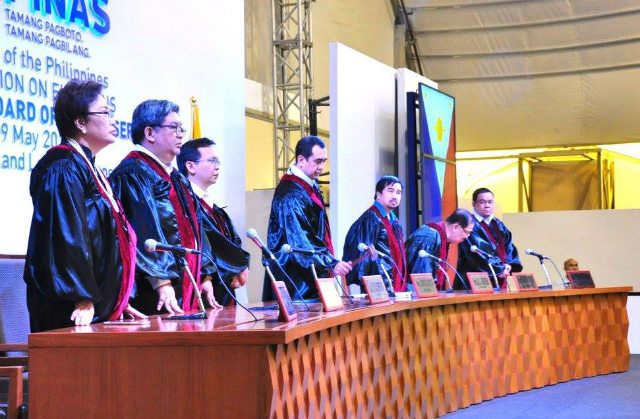 MANILA, Philippines – The Commission on Elections (Comelec) sitting as the National Board of Canvassers (NBOC), is set to proclaim the Philippines’ 12 new senators on Thursday, May 19.

Comelec Commissioner Rowena Guanzon confirmed this in an interview with reporters on Tuesday, May 17.

Guanzon said the NBOC will proclaim the new senators along with newly elected party-list groups.

The proclamation is set to be held at the Philippine International Convention Center in Pasay City, where the NBOC is canvassing votes for senators and party-list groups.

In the Philippines’ last national elections in May 2013, the Comelec proclaimed senators piecemeal, on separate days.

For this year’s elections, the Comelec earlier said it wants to proclaim all senatorial candidates at the same time.

Based on the NBOC’s canvass report past 4:40 pm on Monday, the NBOC had canvassed 121 of 164 certificates of canvass (COCs).

Based on the latest partial, official tally in the senatorial race, below is the list of senatorial candidates in the winning circle so far:

The 13th placer, Francis Tolentino, has blocked moves to proclaim the winning senators until 100% of votes have already been canvassed. – Rappler.com