MANILA, Philippines (UPDATED) – One of the closest allies of President Benigno Aquino III, Liberal Party stalwart Senator Franklin Drilon, topped the list of 12 new senators whom the Commission on Elections (Comelec) proclaimed on Thursday afternoon, May 19.

In second place is Joel Villanueva, who headed a government agency in charge of technical and vocational courses.

Pacquiao served for two terms as Sarangani congressman, and is entering national politics for the first time. (READ: Manny Pacquiao, the senator)

Meanwhile, third time’s the charm for Hontiveros, who already ran for senator but lost in 2010 and 2013.

Reading from Comelec Resolution Number 007-16, Chairman Andres Bautista proclaimed the 12 candidates with the highest number of votes based on the final, official tally: 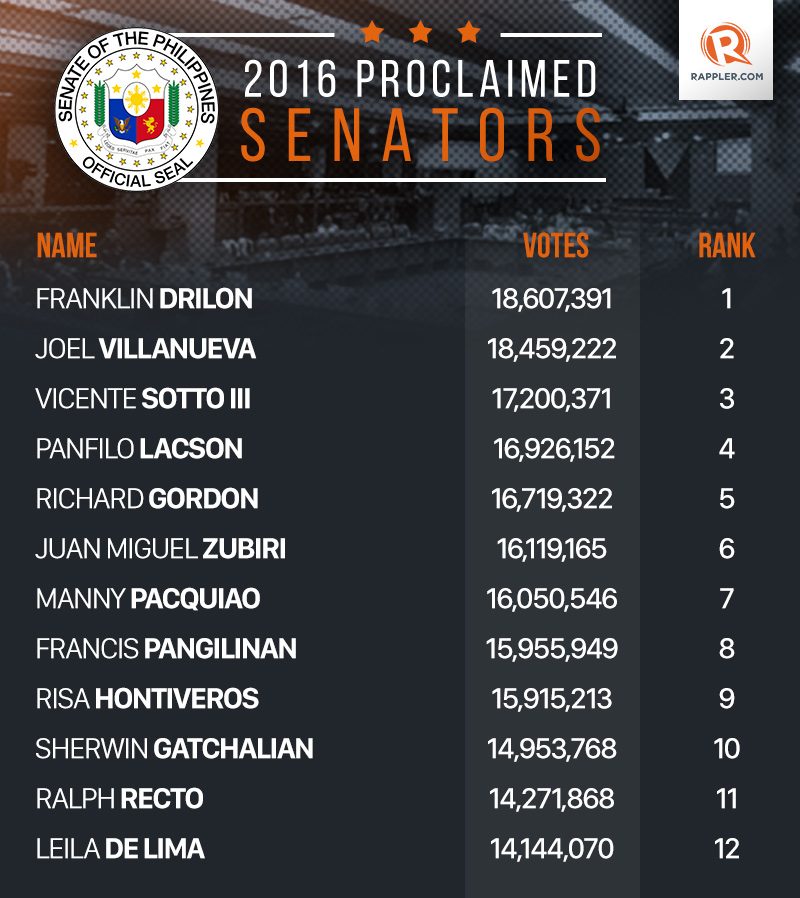 Until early Thursday afternoon, the proclamation of the last 3 winning senators was in limbo

This was after the 13th placer, Francis Tolentino, ran to the Supreme Court (SC) to stop the proclamation of the senators in the 10th to 12th slots in the winning circle.

Tolentino said the recent unauthorized change in an election-related hash code could have compromised the automated election system.

Given that only 1,211 votes had yet to be canvassed, the number “will not materially affect the ranking of the 12 winning senators.” – Rappler.com

Read the other stories from the proclamation: