Vote on Senate president done? Cayetano says yes; others, not yet 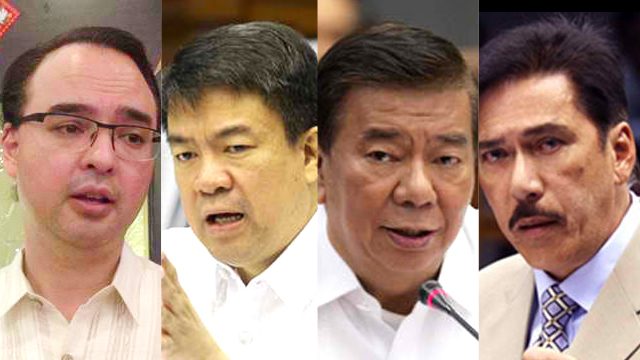 MANILA, Philippines – From several accounts, the Senate presidency is shaping up into a 4-way race, but Senator Alan Peter Cayetano claimed on Monday, May 23, that senators had already reached a consensus on who will be the next leader of the chamber.

He did not name names, but said it is clear to his colleagues who is the preferred Senate president of incoming President Rodrigo Duterte.

Cayetano was Duterte’s running mate. He placed 3rd in the vice presidential race.

Cayetano has admitted he is interested in the top Senate post but remained mum about his numbers. A candidate for Senate president needs to get 13 votes to unseat Senator Franklin Drilon, the incumbent chamber leader.

(The 24 senators already know it. Their statements are only for media and publicity. They already know the legislative agenda, the preferred choice of the majority, who the President prefers.)

“It’s just a matter of posturing for committee chairmanships and whether you agree or not with some of the controversial measures. More or less, it’s 80-90% sold up already,” he added.

Cayetano said the “posturing” is normal because senators are supposedly jockeying for various positions in Senate committees.

How about PDP-Laban head?

Asked if he had met with Pimentel, Cayetano said they talked once but refused to elaborate.

For Cayetano, the “direction” of the Duterte bloc is clear. If Pimentel would want to deviate from it, Cayetano said, it’s up to the PDP-Laban president.

“Im not at liberty to talk about ‘yung sariling pag-uusap namin ng presumptive president about the Senate presidency, pag-uusap namin ni Koko about it (my conversation with the presumptive president on the Senate presidency and my conversation with Koko about it). But nagkakaintindihan naman kami. Malinaw naman ang direksyon namin as a group (But we have an understanding. Our group’s direction is clear). If he’s going to change direction, It’s really up to him,” Cayetano said.

But for Drilon and Sotto, Cayetano’s claim of a “consensus” is not true.

Asked if he feels threatened with reports of a looming change in leadership, Drilon said: “I don’t. The posturing is a natural episode once a new Congress comes.”

Drilon expressed confidence that all 6 Liberal Party senators are still supporting him.

While some LP members in the House of Representatives are jumping ship, for Drilon it is something normal and not a cause of alarm. After all, he said, the Senate has always had a different dynamics.

“Hindi ako nagugulat (I am not surprised). Our political history will teach us that indeed the President’s choice in the House is given respect. Sa Senado, the Senate has maintained its independence. The Senate is independent,” he said.

Sotto, for his part, said he is not aware of the supposed consensus among senators. For him, it is too early to call the shots now.

Asked about his chances, Sotto claimed that his numbers are now increasing. He earlier said he already had the support of 11 senators – 9 of whom are solidly behind him.

He also revealed that his core group continues to meet with the 3 other candidates for Senate president.

“Nag-uusap kami, kausap namin si Alan, Koko, Frank. When we talk, I don’t talk with them alone, usually with our core group. Our group meets every now and then,” he added.

Sotto said he was being asked by his group mates to seek the Senate presidency to espouse a neutral chamber. Without naming anyone, Sotto said his supporters include independent senators and those from his political party, the Nationalist People’s Coalition.

“In our perspective, we would be able to provide unpolarized version of the Senate unlike the other two groups that are eyeing it,” he said, referring to the LP and the groups supporting Duterte. – Rappler.com