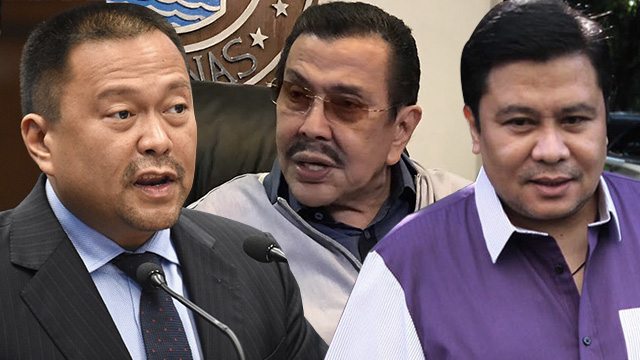 Ejercito said he would be leaving his father’s Partido ng Masang Pilipino (PMP) and take his oath with the Nationalist People’s Coalition (NPC) this week.

NPC, however, is also considering to support Jinggoy for 2019, according to Senate President Vicente Sotto III, a senior party official and Jinggoy’s friend.

Politics as root cause: Ejercito said he and his father have not been on speaking terms “for a long time now,” following Jinggoy’s announcement early this year that he would also run for the Senate.

“Yes, differences in principle. I don’t agree with the position of allowing 2 siblings to run at the same time. It does not look good and it just isn’t right,” Ejercito told Rappler on Monday, October 8.

Ejercito also said he wished his father would support him this time, after supposedly failing to do so in 2013.

“Medyo may tampo, kung kailan ako reelectionsist, sana hindi na lang pinayagan [si Jinggoy], ‘di maganda. My chances of winning now ay talagang apektado, nahahati kami, nahahati boto, yung Estrada name wala sa akin,” Ejercito, who ran and won using the name JV Ejercito in 2013, said in an interview with Radyo Singko. (I feel bad because I’m a reelectionist, he should not have approved of Jinggoy’s Senate run. It does not look good. My chances of winning now are affected because the votes are not solid and the Estrada name is not with me.)

In response, Jinggoy, in the same radio show, debunked his half-brother’s claim.

“I doubt it. Ang tatay ko pantay-pantay ang tingin sa mga anak nya, walang nakakalamang. Yung sinasabi ni Senator JV na hindi sya tinulungan in 2013, I was a first-hand witness to that, tinulungan sya ng tatay ko, imposibleng hindi,” the former senator said. (I doubt it. My father treats all his children the same, no one is his favorite. Senator JV said our father did not help him in 2013. I was a first-hand witness to that, our father helped him. It’s impossible that he did not help him.)

Jinggoy said there is nothing wrong with the two brothers running for the same post. After all, he said it is the Filipino voters who will ultimately decide.

Who gets to use Estrada? As for the use of the Estrada name, Jinggoy said it was legalized since the 1990s, when he first ran for San Juan vice mayor in 1988.

“I am my father’s son. Since I entered politics in 1988, na-legalize na po yung apelido ko. May court order po yan,” he said

Jinggoy is out on bail after being in detention for 3 years over plunder and graft charges in the multibillion-peso pork barrel scam.

The estranged brothers are sons of the former president with different women. The elder Jinggoy is the son of former senator Loi Ejercito Estrada, while JV’s mother is actress-turned-San Juan City Mayor Guia Gomez. The brothers’ rivalry worsened because of politics in San Juan City, where both had served as mayors.

The animosity grew when Ejercito signed a Senate committee report against former senators Juan Ponce Enrile, Bong Revilla, and his half-brother over the alleged misuse of pork barrel in 2014.

Ruling party PDP-Laban is eyeing Ejercito as one of its candidates.

Meanwhile, Ejercito and Estrada are both being endorsed for senator by Davao City Mayor Sara Duterte Carpio, daughter of President Rodrigo Duterte. – Rappler.com