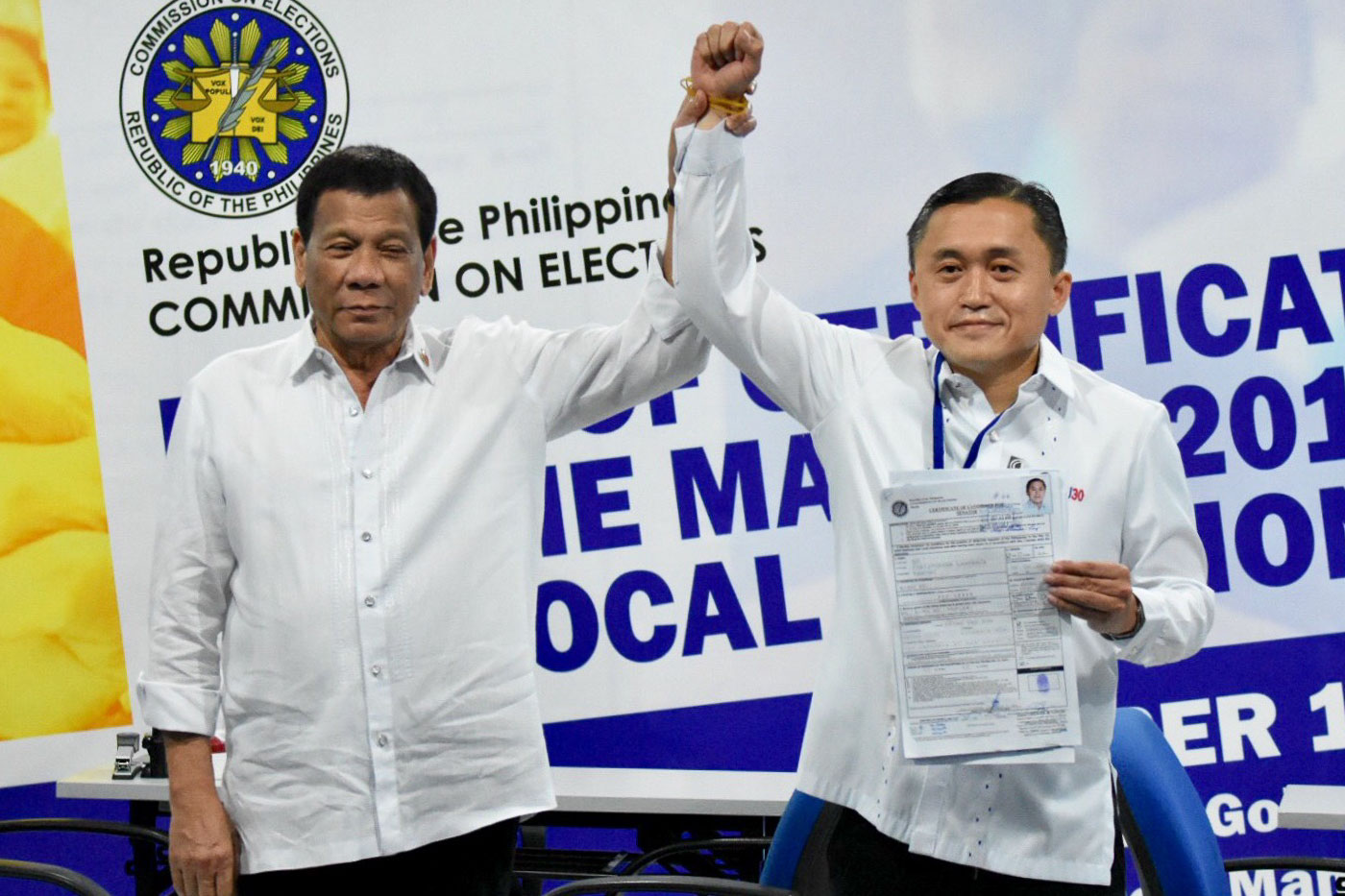 MANILA, Philippines (UPDATED) – Accompanied by no less than President Rodrigo Duterte, Christopher “Bong” Go, filed his candidacy for senator, ending months of speculation on his 2019 plans.

With Duterte by his side, Go filed his certificate of candidacy on Monday, October 15, at the Commission on Elections (Comelec) office in Manila.

Aside from Duterte, several Cabinet members were also there to cheer on the presidential aide.

This is Reminiscent of almost all-Cabinet support for Go during his attendance to the Senate hearing on his alleged involvement in a billions-worth Philippine Navy frigate project.

Before arriving at Comelec, Go visited the San Miguel church beside Malacañang. Some reporters covering him said he appeared teary-eyed. He later on exited the church on a motorcycle. Like the President, Go is a fan of big bikes.

Go’s supporters made themselves felt around the Comelec as early as 10 am. Large throngs of supporters in matching green, orange, or red shirts carried banners and posters screaming Go’s face and name, in an impressive show of mobilization.

Until Tuesday, Go had played coy about whether or not he would seek a Senate seat, even after Duterte himself announced his aide’s intention to run.

Once he files his candidacy, Go is deemed automatically resigned from his post as Special Assistant to the President (SAP), an office created especially for him by Duterte, which also gave him the rank of “secretary.”

But in a DZXL radio interview last Tuesday, October 9, Go said there would still be a way for him to stay close to Duterte even after resigning.

“Kung gusto ko magsilbe sa isang tao na libre at walang sahod, hindi naman bawal ‘yun,” he had said. (If I want to serve a person even without pay, that’s not prohibited.)

Go has been Duterte’s assistant since 1998 when he was Davao City congressman.

As top aide, Go is known as the “gatekeeper” to Duterte. The President relies on him to manage his schedule, contact persons he needs to get in touch with, and follow up on his priority initiatives with Cabinet members or other government officials.

In recent months, Go had stepped out of his shell, attending events without Duterte, entertaining media interview requests, and giving public speeches. His use of private funds for giant and expensive billboards and a brand new ambulance for a provincial hospital raised concerns on whether he violated the government ethics code.

The Philippine Center for Investigative Journalism also found that the company of Go’s father and stepbrother won several contracts from the Department of Public Works and Highways in Davao.

As a government official, Go’s pet project is establishing Malasakit Centers nationwide – one-stop shop facilities to hasten the delivery of medical services and other forms of assistance to poor patients. – Rappler.com