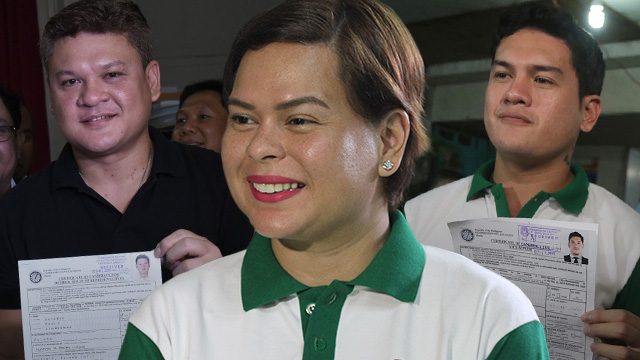 The President’s eldest son Paolo is running for Davao City 1st District congressman and was the first of the 3 to file his certificate of candidacy (COC) on Friday, October 12.

The 3 are Duterte’s children with his first wife Elizabeth Zimmerman.

Veronica, Duterte’s child with Honeylet Avanceña, is only 13 years old.

The President himself was Davao City’s longest serving mayor, having held the post for some two decades.

Victories by all 3 in 2019 would cement the domination of the Duterte family as it would be the first time that the highest local positions in Davao City would be occupied by members of a single family. (READ: The Dutertes: A family in the national spotlight)

It’s not unusual in Philippine politics for the children of presidents to seek electoral positions.

But Sara and Paolo had served in local positions in Davao City even before their father’s presidency. Sara had been mayor and vice mayor, while Paolo had been vice mayor, councilor, and barangay captain. – Rappler.com