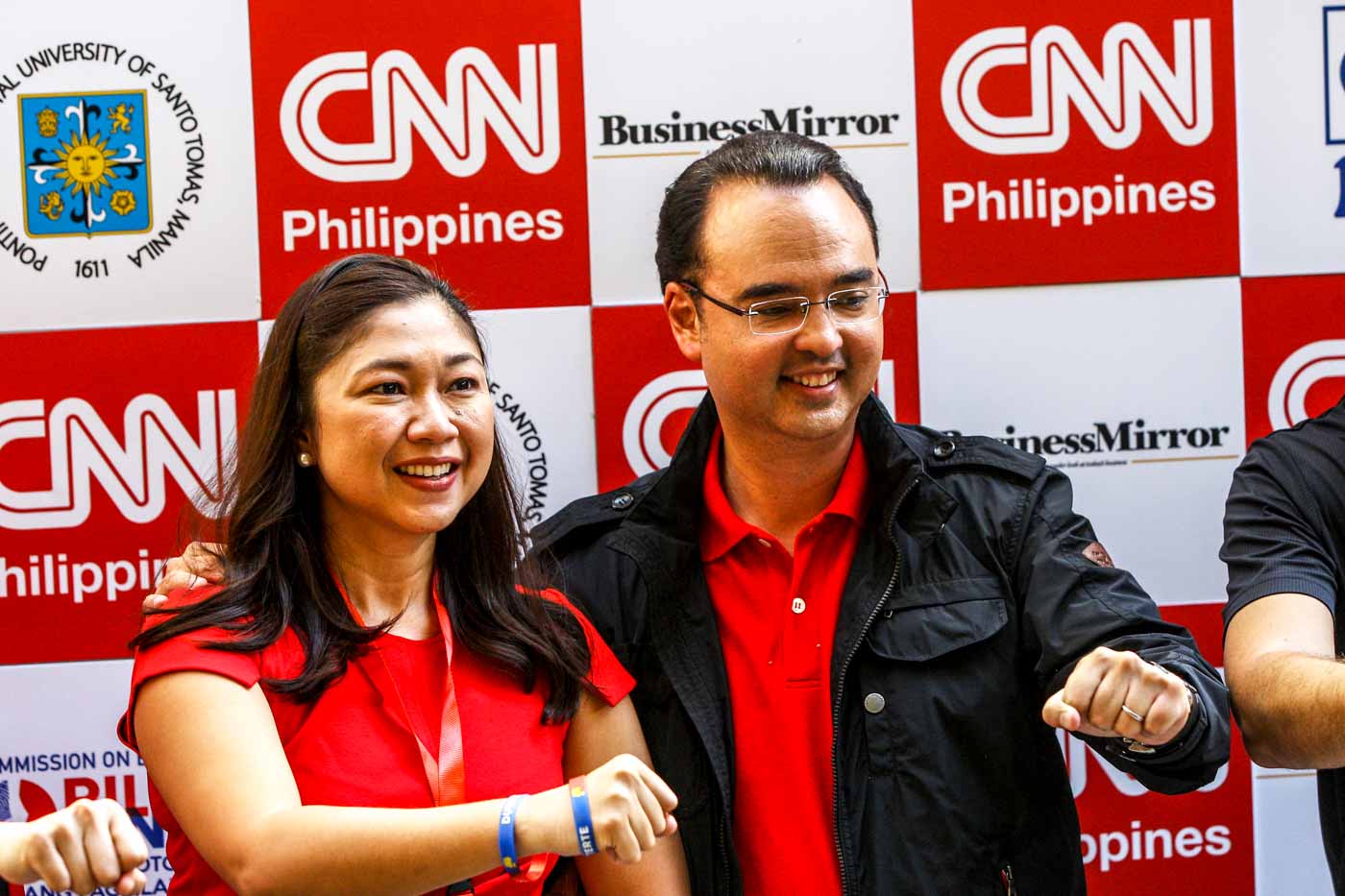 MANILA, Philippines (UPDATED) – Two separate petitions have been filed with the Commission on Elections (Comelec) to stop the congressional bids of spouses Alan Peter Cayetano and Lani Cayetano, who are running in different districts of Taguig in 2019.

To run in the first district of Taguig, the former senator declared in his COC that he is a resident of Barangay Bagumbayan. Lani, who is running in the second district, declared that she resides in Barangay Fort Bonifacio.

Why is having separate addresses anomalous? In separate complaints against Alan Peter and Lani filed on Monday, November 12, Marañon said Articles 68 and 69 of the Family Code mandate a couple to live together in one matrimonial domicile or residence.

“As a consequence of this obligation to live together, the chosen abode of the husband and wife is deemed to be their domicile or legal residence for all legal intents and purposes…. Thus, one spouse cannot keep his or her own domicile, separate and independent from the matrimonial domicile,” the complaints read.

“For this reason, the matrimonial domicile is controlling in determining the residence of the spouse who is seeking to run in an election.”

“Thus, Alan cannot claim domicile in Barangay Bagumbayan, while his wife, Lani Cayetano, in Barangay Fort Bonifacio. In other words, they cannot run in two different districts or jurisdictions at the same time,” Marañon, a Rappler columnist, said in a complaint brief.

Yet, the Cayetano couple, “despite being married and obliged by law to live together in one domicile…ran in TWO separate districts, thereby raising serious legal infirmities as to their qualifications,” the complaints pointed out.

What are the Cayetanos’ alleged liabilities? Since the complaints will force the couple to choose which is their domicile, one of them will turn out to have declared a false address.

If the more recent address is identified as the domicile, then the one using it has the burden to prove he or she has established residence there in time for the elections.

Article VI, Section 6 of the 1987 Constitution requires that a congressman or congresswoman is a resident of his or her district “not less than one year immediately preceding the day of the election.”

Either way, the Cayetanos can be held liable for having declared false information, which will merit the cancellation of their COCs.

If Comelec grants this, then the names of Alan and Lani will not be included in the list of candidates that the poll body is finalizing as of this posting. Their names will also not appear on the ballots for the 2019 elections.

What has the Supreme Court said about similar cases? The complaints cited Supreme Court (SC) decisions establishing this principle.

In Larrazabal vs Comelec in 1991, the poll body cancelled the COC of Adelina Larrazabal, who was running for governor of Leyte. She had declared her residence in Kananga town, but the Comelec cited her marriage to a resident of Ormoc City, where voters don’t vote for provincial posts.

The SC upheld the Comelec, saying: “For the purpose of running for public office, the residence requirement should be read as legal residence or domicile…. Husband and wife as a matter of principle live together in one legal residence which is their usual place of abode.”

In Marcos vs Comelec in 1995, the SC explained that “residence is synonymous with domicile.”

Domicile, meanwhile, is defined in the New Civil Code as “the place of [natural persons’] habitual residence.”

The Court recognized that Imelda Marcos, a resident of Leyte, “gained a new ‘domicile’ after her marriage” to Ferdinand Marcos of Ilocos Norte.

She “only acquired a right to choose a new [domicile] after her husband died.”

Who lives in Two Serendra? The petitioner cited the address declared by Lani Cayetano to also point out how the Cayetano siblings are establishing not just a political dynasty but “a super dynasty” in Taguig.

Lani’s address in her COC is Unit 352-A, Two Serendra, Fort Bonifacio, Taguig City. It is also the residence declared by her in-laws – Alan’s siblings – in their own COCs in several elections.

Alan’s sister Pia, the current representative of Taguig’s 2nd district (whom Lani is seeking to replace), is running for senator. The unit was her address in the 2016 and 2019 COCs.

Alan’s brother, Lino (who served as 2nd district congressman before Pia did), is running for Taguig mayor to replace Lani. Unit 352-A was also his address in his 2013 COC.

“If that condominium unit is the legitimate domicile of the three (3) of them, how can three (3) families HABITUALLY RESIDE and MAINTAIN LIFE together in such a tiny space?” the petitions asked.

Marañon said the cases against the Cayetanos should be an opportunity for the Comelec to also “address this scheme of dynastic expansion…duly guided by the Constitutional policy against political dynasties and [Comelec’s] mandate to ensure greater access to opportuities for public service.” – Rappler.com