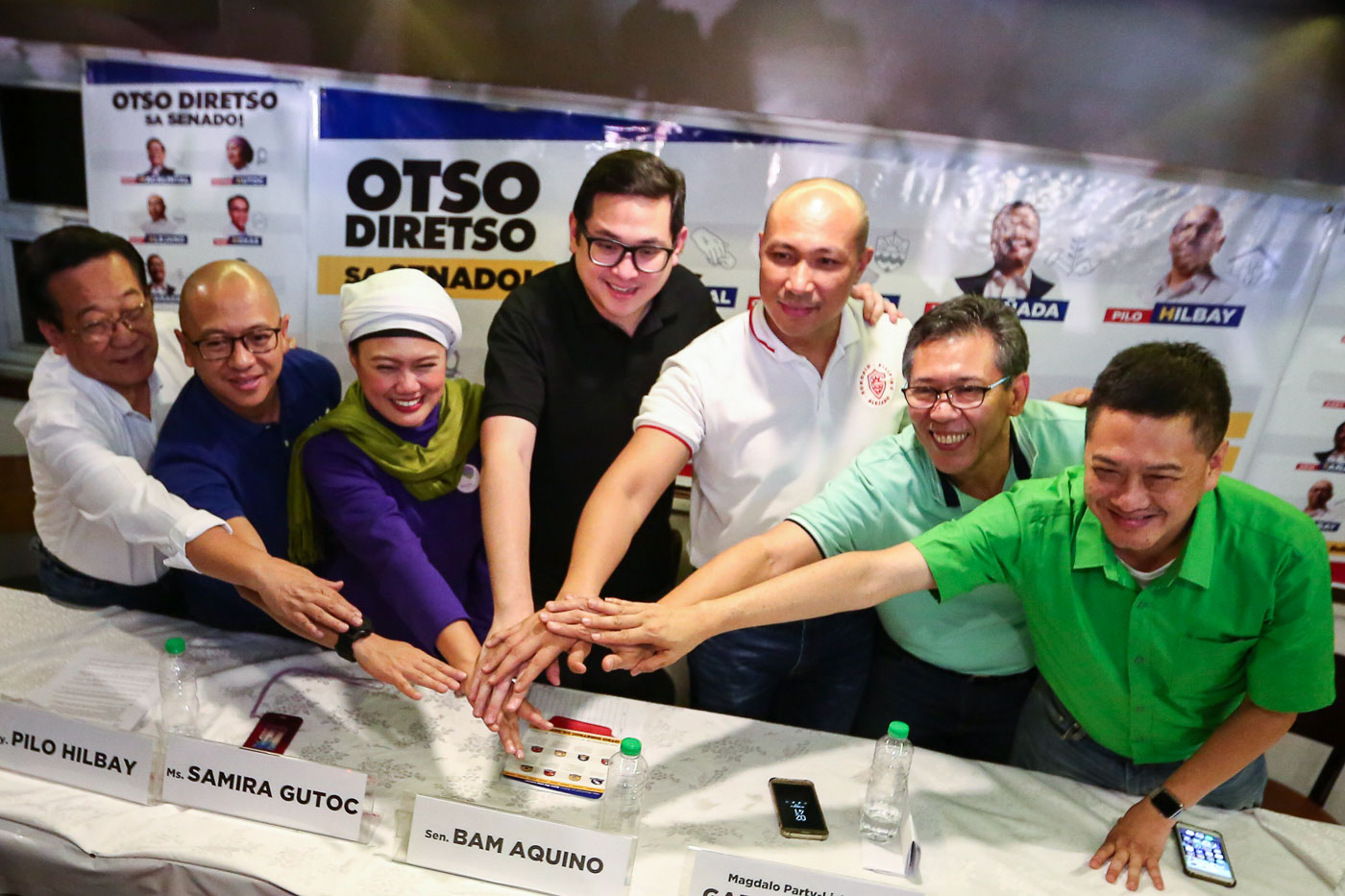 MANILA, Philippines (UPDATED) – The moment of truth has begun for the opposition senatorial slate as they begin Day One of what would certainly prove a difficult 90-day campaign period for the underdogs.

The slate, which has had to change its name from the tongue-twisting “Oposisyon Koalisyon” to the sharper-sounding “Otso Diretso,” kicked off its campaign on Tuesday, February 12 in Caloocan City.

Caloocan City is a strange place to begin. Although it has 719,447 registered voters in 2019, Mayor Oscar Malapitan is an ally of President Rodrigo Duterte. And it shows.

While their opponents, the Sara Duterte-led Hugpong ng Pagbabago, is welcomed by large mass of crowds in the Arroyo bailiwick of San Fernando, Pampanga, Otso Diretso had to make do with a handful of Muslim supporters for Samira Gutoc, the slate’s most trending candidate as of late.

But with membership of the Liberal Party (LP) dwindling, Otso Diretso has to settle for second, or even third best. LP’s Edgar Erice, Representative of the 2nd District of Caloocan, still has influence over the city, said slate coordinators in the quiet Tuesday morning that kicked off their campaign. 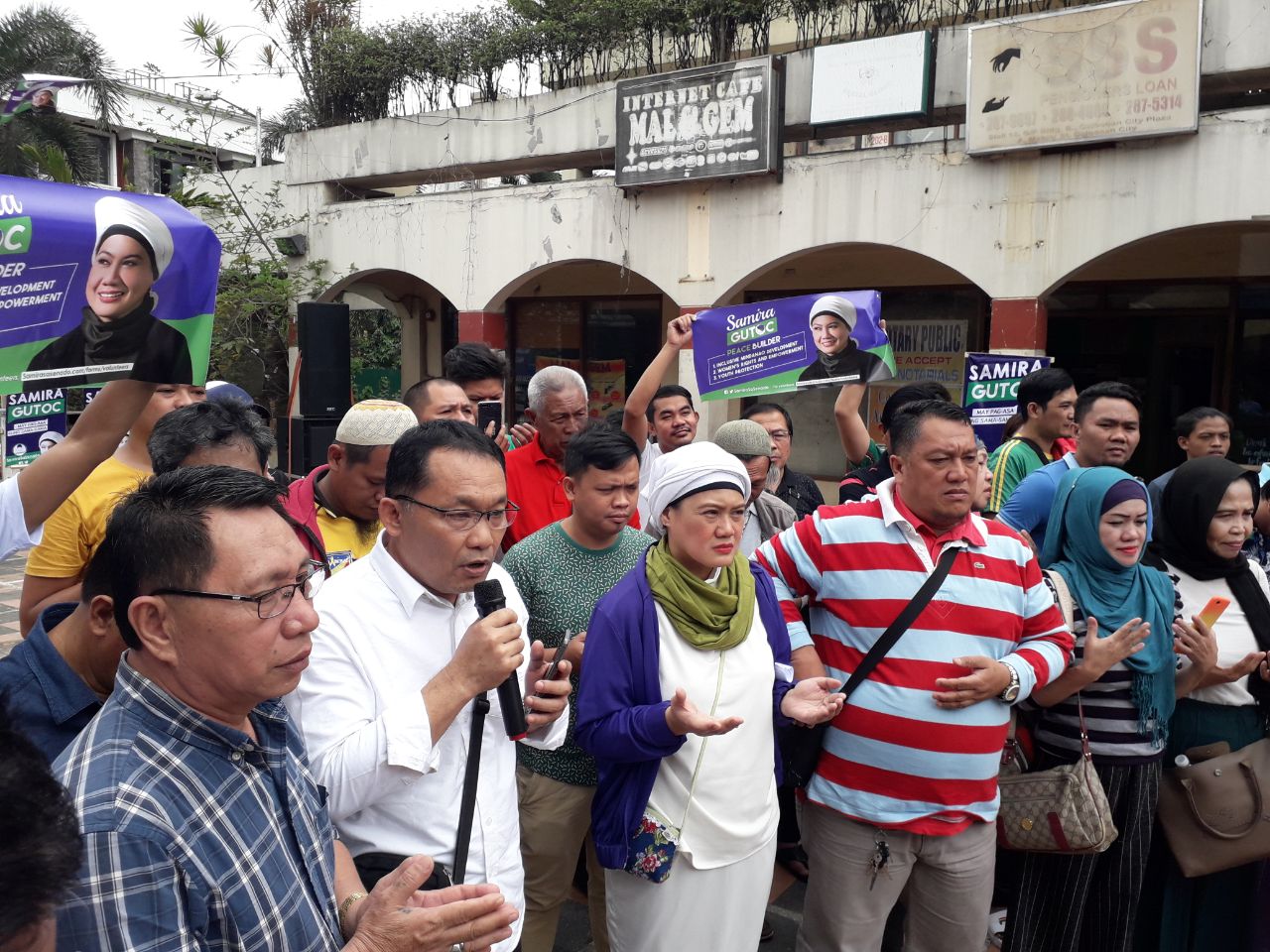 Gutoc was the only candidate during the morning festivities, with 6 others – Gary Alejano, Bam Aquino, Chel Diokno, Florin Hilbay, Romulo Macalintal, and Erin Tañada – following in the noon press conference.

The slate’s most prominent candidate, Mar Roxas, chose a solo trip for the kickoff, campaigning in his hometown in Capiz.

Gutoc thanked Malapitan in her speech, though the mayor was not there. Gutoc said Malapitan sent his assistant to coordinate her prayer rally in front of city hall.

The civil reception is the best that Otso Diretso could hope for, as Gutoc said some local officials wouldn’t even let them speak on their turf.

(There are some places we cannot even visit because of course, they are administration turfs, and I am opposition, but we’ve managed to find schools, markets, and I hope they could let us speak there and not bar our events.)

Roxas was also not present during the launch of the then-called Oposisyon Koalisyon in Marikina in October.

Roxas’ absence was so prominent that vocal opposition supporter Mae “Juana Change” Paner told the party to tell Roxas to make more of an effort to join the slate in its activities.

Reelectionist Senator Bam Aquino said during the press conference that the Caloocan event is just a “pre-launch,” with the main event happening in Robredo turf Naga City on Wednesday, February 14, and where all 8 candidates would be present.

(We understand that Secretary Roxas has an event in Cadiz, but we’re hoping that by tomorrow we will be complete. Eight is better than 13 right?)

“We will have several opportunities for him to join us again, at mangyayari talaga, kahit ako noon, may mga panahong hindi ako nakakasama sa slate (and that really happens, even during my campaign, there were times I couldn’t join the slate) that’s how it is,” said Pangilinan.

The mood picked up late afternoon when the more popular Aquino took to the streets to start their Persuasion campaign focusing this time on voter awareness of the candidates.

In the campaign, the candidates – or their volunteers – would go house-to-house to ask common Filipinos prepared questions that would pin down on the issues close to the voters’ hearts, or whether they know the candidates at all.

Often, the voters admit they do not know most of the candidates on the slate.

Awareness is still low at this point that Gutoc said there’s a possibility she might not even be able to campaign in Mindanao, where she is already known as a long-time peace worker. She said they might consider focusing on her visibility especially in Luzon.

(One of our strategies for me to be known in Luzon is to go there as much as possible, like in Lingayen Gulf, Calabarzon Area, Pampanga, Pangasinan, so if the media can give me a chance, and Local Government Units, although you’re trying to avoid us, I hope we can speak in your townhalls.)

Gutoc is coming off a trending performance at GMA News’ senatorial debate, where her clapback at fellow Mindanaoan, former police chief General Ronald “Bato” dela Rosa, was applauded by millennials on social media.

Of the 8 candidates, Gutoc is one with the more traction, with her aggressive style of campaigning, and strong statements on issues she advocates for like peace in Mindanao and displacement due to war.

Put in another slate with more influence, Gutoc has the potential to rise through the surveys, but she said this is the best time to be an opposition. Gutoc was part of the Duterte adminstration through the Bangsamoro Transition Commission but she resigned because of the president’s rape jokes.

(I would not have traded this for anything, I’ve always felt to stand by my principles, and not to cling on to power. I resigned from the Bangsamoro Transition Commission, they know this is not personal, and maybe that’s why the President has not hit me yet, because he knows I’m just a young woman who studied and who has principles.)

Human rights lawyer Chel Diokno, a legacy candidate like Aquino, Roxas, and Erin Tañada, said that what distinguishes the slate is the candidates’ track record, principled stand, and proven ability.

But will their chest-beating narrative translate to votes? They have 90 days to make it happen. – Rappler.com