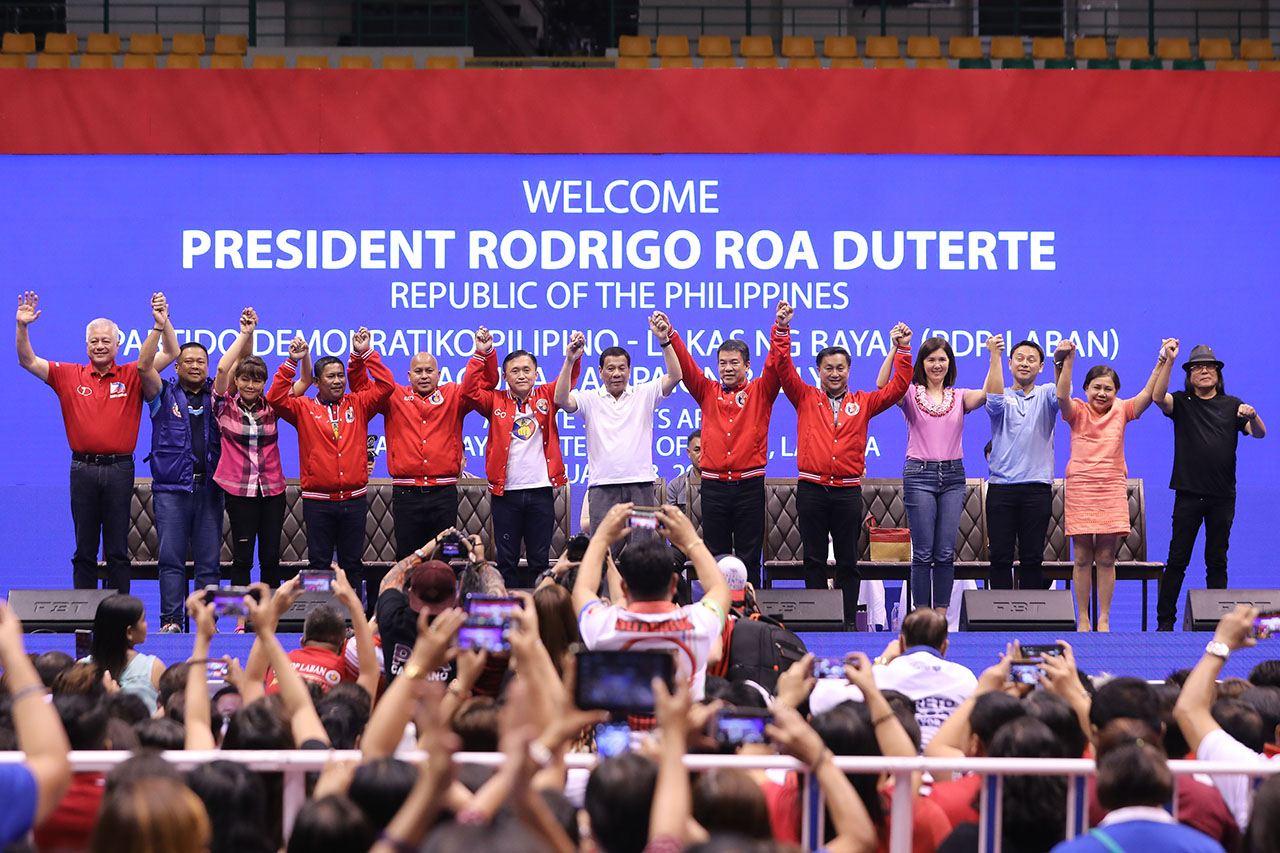 Reelectionist Laguna Governor Ramil Hernandez, a member of the Nacionalista Party (NP), called on residents to extend their trust in their local officials to Duterte’s Senate bets. In the end, he claimed, this would be beneficial for the province.

(Let’s not forget that we have party mates running for national posts because they are the ones that your local elected officials will approach.)

(If all of us win, we would all benefit…. The province of Laguna would benefit from it.)

Santa Rosa City Mayor Dan Fernandez, who is seeking a congressional post, made the same commitment.

“Tayo po ay magdedeliver sa lahat ng kandidato sa ating administrasyon,” Fernandez said in a speech. (We will deliver the votes for all candidates of the administration.)

Hernandez said all mayors of Laguna are united in supporting the administration, except for one – an apparent reference to Pagsanjan Mayor Maita Ejercito, wife of his political foe, former governor ER Ejercito.

In his speech, Duterte endorsed each of his 12 chosen bets for May 2019. (READ: Rafael Alunan completes Duterte’s 2019 Senate slate)

“Kaya ayaw kong matalo pati ang mga kandidato ko. ‘Pag hindi [sila nanalo], balikan ko kayo rito lahat,” the President told the audience. (That’s why I don’t want my candidates to lose. If they do, I’ll get back at you.)

The guest candidates in the list are Freddie Aguilar, Raffy Alunan, Sonny Angara, Pia Cayetano, JV Ejercito, Imee Marcos, and Cynthia Villar. Of the 7 guest bets, 3 are from the NP – Cayetano, Marcos, and Villar.

Ejercito is from the Nationalist People’s Coalition; Angara is from the Laban ng Demokratikong Pilipino; and Aguilar was a member of the supposed “rogue” faction of PDP-Laban.

Adelaida Corrales, 59, said she went to the Alonte Sports Arena to listen to the plans of the senatorial candidates.

Asked if she supports Duterte, Corrales candidly said she still does to an extent. She, however, refused to explain.

She has yet to decide on her preferred bets, but said she would also vote for candidates outside of Duterte’s slate.

Melanie*, not her real name, said she is supporting Tolentino for senator, citing his supposed kindness.

She said she and her friends had been at the stadium since 7 am. The event officially started at 1 pm.

Around 5,000 people from Laguna and nearby areas trooped to the venue. Some were brought by buses, others by jeepneys and vans.

Laguna is one of the vote-rich provinces in the country, with more than 1.6 million voters in 2016.

Duterte won in the province then, with almost half a million votes. Senator Grace Poe followed him in second place. – Rappler.com