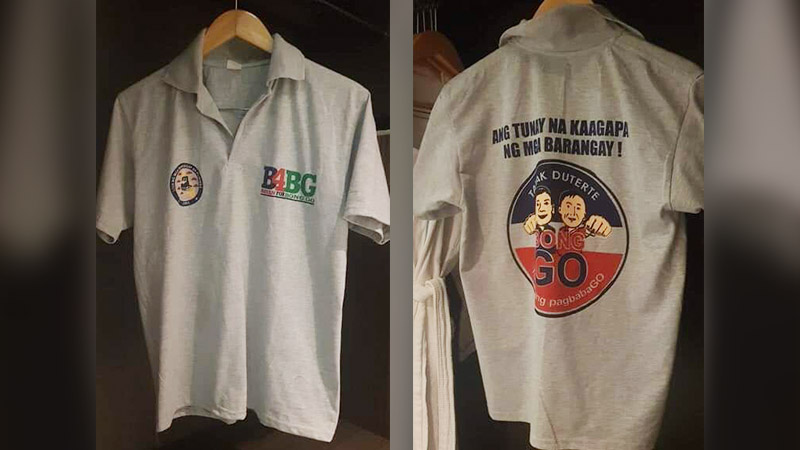 MANILA, Philippines (UPDATED) – Did the government spend for Bong Go’s campaign giveaways? According to opposition candidate Gary Alejano, it did.

Alejano on Tuesday, March 5, released photos and documents which supposedly showed how local government funds were used to pay for Bong Go t-shirts.

The event was held from February 25-27, with the opening ceremonies attended by President Rodrigo Duterte.

Año authorized the local officials to pay for the fee of attendees, which range from P13,800 for those not staying at select hotels to P19,800 for stay-in delegates.

“The payment of applicable travelling expenses and a registration fee per participant, to defray the costs of hotel accommodation, meals and congress materials, may be authorized, chargeable against their respective local funds, subject to the availability thereof and to the usual accounting and auditing requirements and to all pertinent laws, rules and regulations,” said Año’s memorandum.

(Barangay captains were surprised to find the kit they paid for contained polo shirts with Bong Go labels.)

Alejano said the shirt giveaways are a “clear election offense.”

(I call on Bong Go to stop using barangay captains and government funds for his personal campaign. This is a clear election offense.)

“That might be a problem,” Jimenez said about the Bong Go-labeled shirts, if indeed they were funded by the DILG.

“The president himself said, didnt he, that no government resources should be used for partisan political activities,” Jimenez told Rappler.

Below is the Año memorandum as provided by Alejano:

– With reports from Mara Cepeda and Pia Ranada/Rappler.com