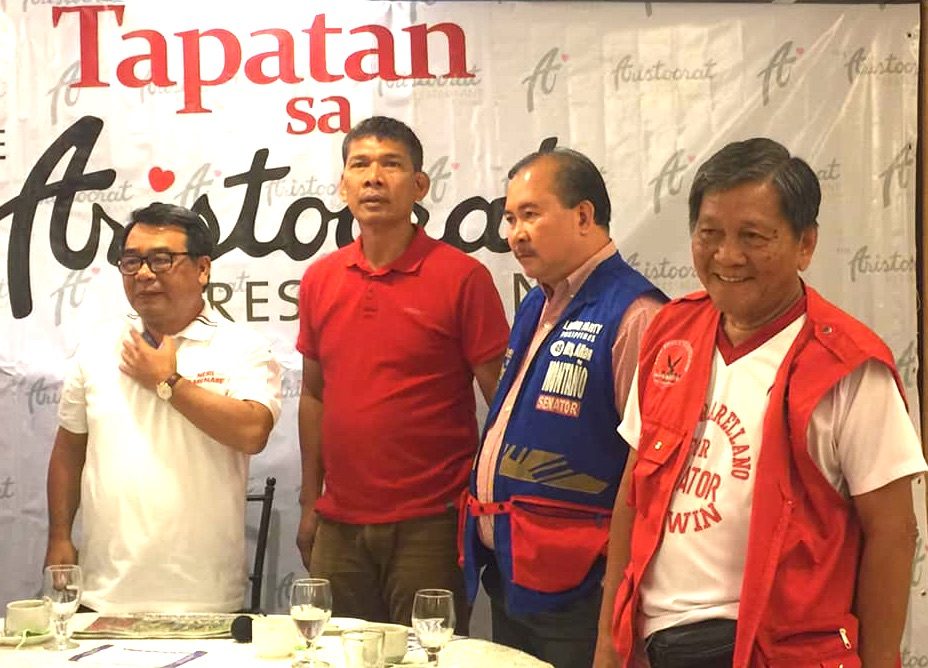 Facebook Twitter Copy URL
Copied
For starters, labor lawyer Allan Montaño says there is a big difference to changing the word ‘or’ to ‘and’ in the labor code definition of a contractor and sub-contractor

MANILA, Philippines – Much has been said, and promised, about ending contactualization but labor senatorial candidates said that the only solution is to change the 45-year-old labor code.

(There should be amendments to the law, the law cannot be as is, we need a law that unequivocally bans contractualization.)

(Workers should be direct hires of the company, the company should have the responsibility to its workers, and not just pass its obligations to the manpower agency or service cooperative.)

They are referring to the thorny issue of sub-contracting, or the scheme where middle parties hire contractual workers for work to be rendered to a principal employer. Under this scheme, the principal evades responsibility to the worker as they are not their direct employees. This practice is allowed by the Labor Code.

House Bill (HB) 6908 or the Security of Tenure Bill passed the House of Representatives in January 2018 and has been transmitted to the Senate, but Colmenares calls it a “bad bill.”

HB 6908 aims to clamp down on contracting by requiring contractors to obtain a license from the Department of Labor and Employment (DOLE). Colmenares said the bill would just institutionalize contractualization.

“It practically repeated what is already in the law, it will institutionalize contractualization further. We (Makabayan) withdrew our support for that bill. We need to amend the labor code on various issues,” Colmenares said, a three-termer congressman.

Labor lawyer Allan Montaño, also part of Labor Win, said there could be a compromise, which is to still allow agencies and cooperatives to exist but limit their authorities.

Montaño said the solution could be as simple as changing the word “or” to “and” in the provision of the Labor Code.

Article 106 of the Labor Code allows contracting or sub-contracting. The provision defines a contractor as one which has “substantial capital OR investment in the form of tools, equipment, machineries, work premises, among others, and the workers recruited and placed by such person are performing activities which are directly related to the principal business of such employer.” (Emphasis ours)

If “or” is changed to “and,” a contractor must both have substantial capital and investment.

(If we change that to ‘and,’ we would have gotten rid of 50% of the problem of contractualization, why? Because many agencies have the capital but do not have the tools, they do not have facilities, what they have are jus the workers who they hired for their principal.)

A recent decision by the Court of Appeals (CA) shows how the fight to end contractualization will really depend on amending the Labor Code.

In March 2017, Labor Secretary Silvestre Bello III signed Department Order (DO) Number 174 which prohibited what is called the labor-only contracting.

In the order, labor-only contracting covers “contracting out of work through an in-house cooperative which merely supplies workers to the principal; requiring the contractor’s or subcontractor’s employees to perform functions which are currently being performed by the regular employees of the principal.”

Workers for PLDT, who were hired by middle party Meralco Industrial Engineering Services Corporation (Miescor), won their case in DOLE when the labor department declared that PLDT and Miescor engaged in labor-only contracting. The DOLE used DO 174 for its decision.

But in January 2019, the Court of Appeals reversed the DOLE’s decision and said Bello’s  DO 174 must yield to the labor code, which the court said allows contracting or what Miescor did to the workers.

“Labor Code did not qualify as to the kind of work that may be contracted out as it simply said “the performance of the former’s (employer’s) work. Since DO 174 is a mere administrative issuance that implements said provision, the same must not also create any distinction that will have the effect of broadening or amending the legislative intent,” the CA said.

De Guzman said President Rodrigo Duterte had the power to amend the law and abolish contractualization once and for all.

(If President Duterte did not turn his back on his promise, contractualization would have ended. So next time, don’t rely on mere promises.) – Rappler.com