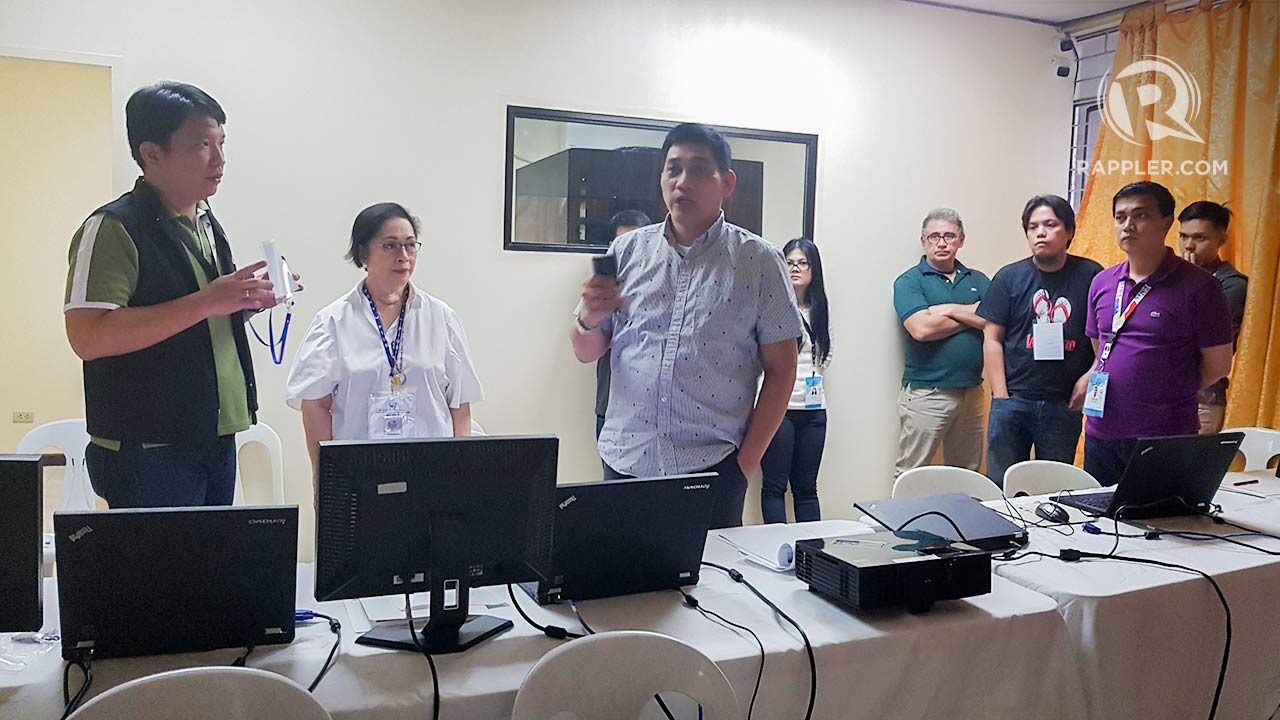 Facebook Twitter Copy URL
Copied
Comelec says PPCRV will do the initial review and produce a report based on examination of the server logs. After that, copies of the logs will also be released to other accredited organizations, including media.

MANILA, Philippines – After a two-hour back-up process, the Commission on Elections, on Friday, May 17, turned over the Transparency Server logs to representatives of the Parish Pastoral Council for Responsible Voting (PPCRV).

Prior to the turnover, representatives of watchdogs and media groups who were accredited to receive results files from the Transparency and Media servers watched as personnel of the Comelec’s IT Department – assisted by Smartmatic personnel – generated backups of the server logs. The proceedings were shown via a projector in the server room located at the Pope Pius Catholic Center in Manila.

Comelec Commissioner Marlon Casquejo turned over the USB and the external hard drive which contained the server logs backup to William Yu, IT Director of PPCRV, and PPCRV chair Henrietta De Villa.

Casquejo said the PPCRV will be the first group to examine the logs and submit a report to the Comelec. However, other accredited groups will eventually be given copies of the logs.

“We decided to turn it over first to PPCRV and have it processed by them so they can make a report to the Commission. After that, it will be made available. For now, it is the PPCRV.”

PPCRV’s Yu said they would examine the logs to validate if results were indeed being received by the system even during the 7 hours when the system failed to release results files to media and watchdog groups. “We will also validate if the issue was really in generating the export file,” Yu said.

Throughout the backup process, Roderic Ilagan of the Comelec’s IT Division explained the significance of queries which were being made as projected on the screen in front of observers inside the server room.

Ilagan also noted that the database servers required the authentication keys when he tried to log in. This, he said, was because it was the first time that his account accessed the database.

The Transparency Server system was tasked to release real-time results for media and watchdog groups.

However, it malfunctioned on Monday, May 13, and failed to release results files for 7 hours.

This extended gap gave rise to speculations of cheating.

By the time the server was able to resume releasing results files, the file already consisted of over 90% of expected precinct-level results. (READ: Was transmission of 2019 PH election results better or worse?)

This was not the first time that the Transparency Server system got embroiled in controversy.

In the 2016 elections, a “cosmetic change” which was done to fix the rendering of names with the character “Ñ,”  was also used to justify allegations of cheating in favor of incumbent Vice President Leni Robredo.

In 2013, the server failed to deliver 24% of clustered precinct level results.

As of writing, the Central server already received 99.14 % while the websites of media groups connected to the Transparency and Media servers only received 97.88 % of expected election returns. – Rappler.com